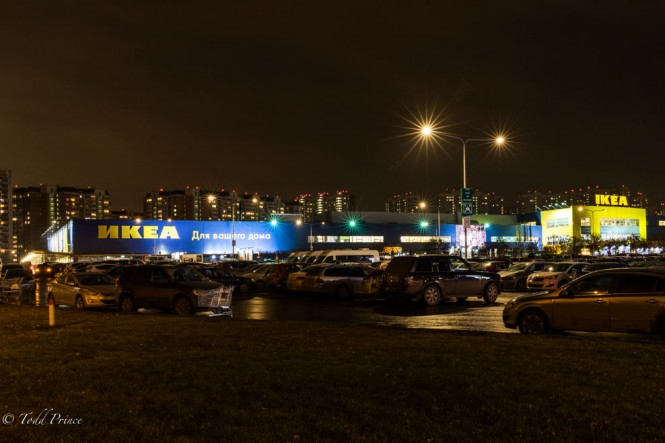 Opened nearly 15 years ago, this Ikea store at the edge of Moscow still pulls in big crowds on the weekends.

There are plenty of signs Russia’s economy is heading toward a recession. Aside from the quickly falling ruble, companies are trimming headcount and advertising expenses, restaurants aren’t packed, people in general are nervous…

But there is one place in Moscow on the weekend that seems to defy the feeling of the coming recession: Ikea.

When crisis is approaching and the ruble is weakening, there is a natural tendency in Russia to buy apartments as a store of value.

And conversations with acquaintances indicates that tendency is kicking in. Those apartments need to be furnished and Ikea is the destination of choice.

Almost 15 years to the date it opened to a packed crowed (read here the original Moscow Times story here) Ikea still pulls in tens of thousands on the weekends.

The store, which is located at the edge of Moscow in the direction of Sheremetevo airport, has been helped by the massive housing projects going up all around the store.

This past Saturday evening, the cashier lines at Ikea were about 7 people deep. The parking lot – which also serves the shopping center Mega Mall, and chain stores OBI and Achan – was jammed packed.

I couldn’t find an empty table in the open dining area in Mega Mall, forced to sit at a table with people I didn’t know.

That said, Ikea must surely be feeling pain from the Russian economy’s weakness…. if not from slightly smaller crowds, then from the ruble devaluation.

Ikea sells lots of imported goods –  Swedish and Polish candles to just name one item – and it may not be able to pass on the full ruble price increase to consumers.

On a positive note, the massive ruble devaluation should push Ikea to produce more goods inside Russia – assuming they can reach an agreement with Russian authorities, something that historically hasn’t been easy for Ikea.

If the weekend crowd dies down at Ikea, then you can be sure Russia is in the midst of a strong recession. 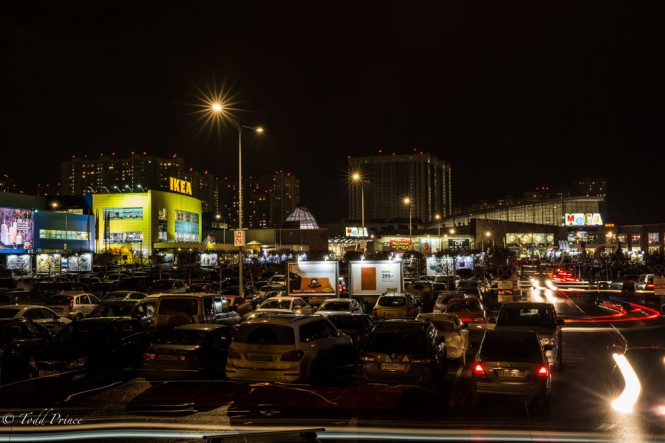 Ikea is to the left and the shopping mall chain it owns – MEGA – is to the right. 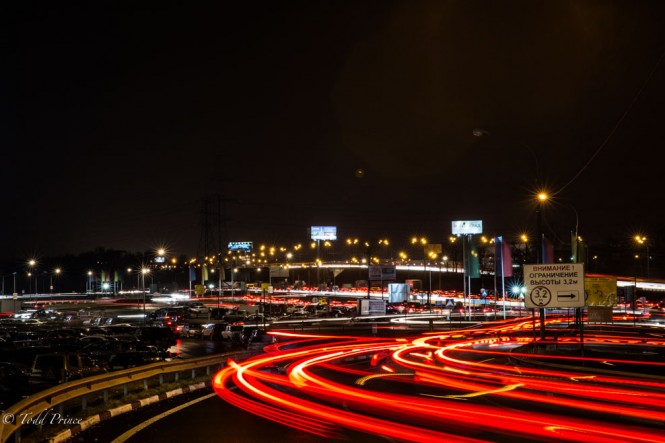 Ikea Khimki is located near a major highway that connects Moscow with Sheremetevo airport. The road is often jammed. 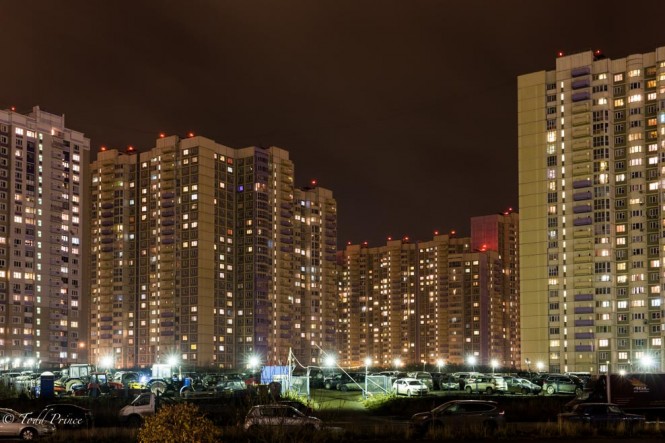 New housing that has gone up in recent years near the Ikea in Khimki. The construction is continuing. 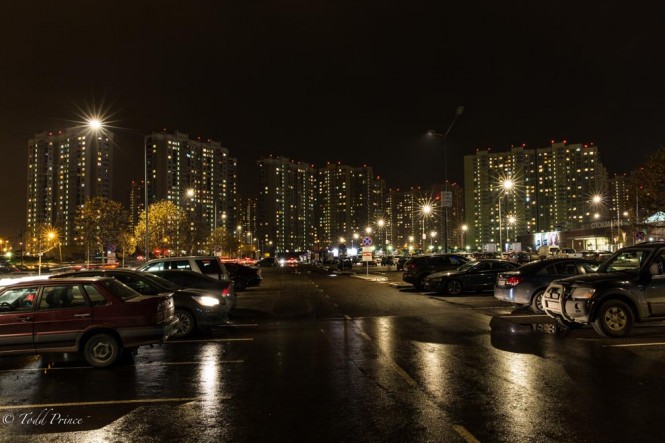 The parking lot around the Ikea-MEGA shopping complex is in the foreground while the new mass-housing projects stand tall in the background. 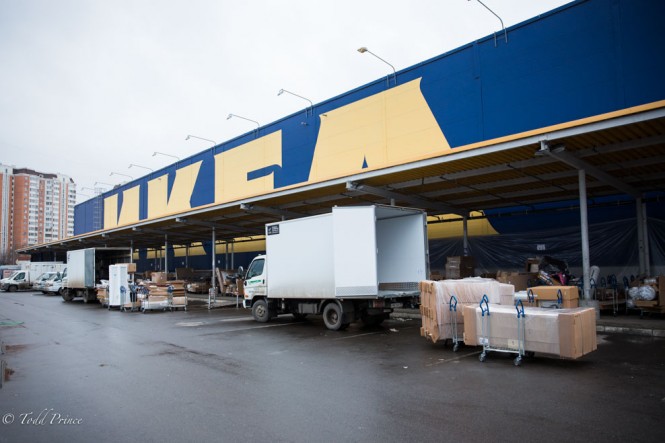 Ikea trucks being loaded up to carry orders to customers in Moscow and Moscow suburbs.

Sometimes those Ikea or MEGA shopping carts don’t make it back to the store. In the background is the huge housing project by publicly traded Russian company PIK.

Workers finishing up a massive housing block next to the Ikea-Mega shopping complex. 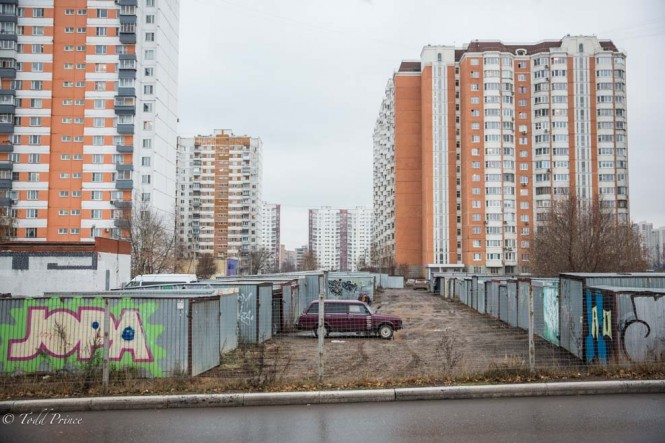 A man fixing his Russian-made car in front of his metal-box garage. The Ikea store is to my back. 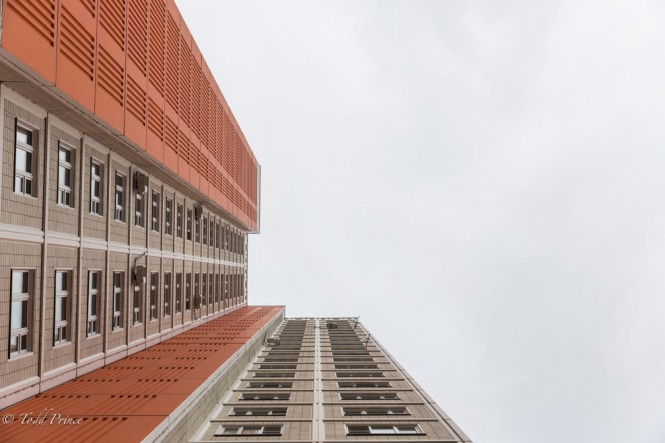 One of the recently built mass-housing blocks near Ikea.