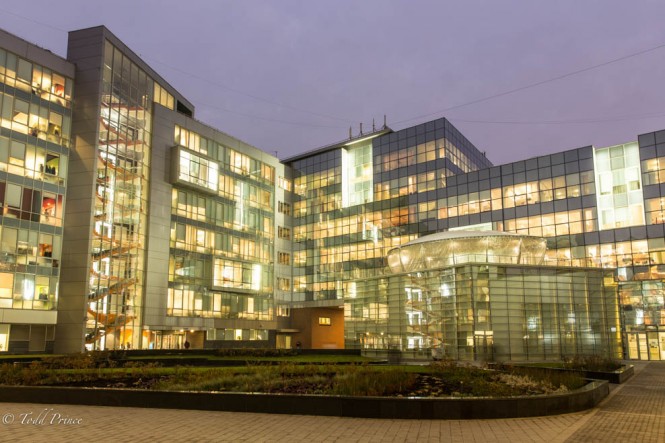 Inside the Yandex courtyard. The photo is taken in the direction of the main entrance area.

Visit to Yandex Headquarters in Moscow

I have visited many Russian company headquarters over the years and – whether they be Soviet-era buildings or more modern – they have a tendency to want to reflect power, secrecy and/or hierarchy.

One of the most vivid examples was a Russian bank headquarters situated in the center of Moscow. The thick, steel doors looked like they could stop a tank. They windows were darkened to prevent pedestrians from seeing inside.

There are exceptions to this and fortunately they are growing. One of my favorite is the Moscow HQ of Yandex, a technology company often referred to as ‘the Google of Russia’ for its leading search engine and maps applications. 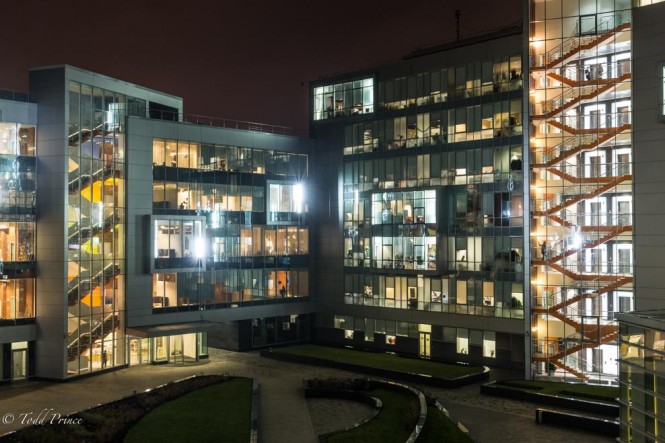 A view of the Yandex building and courtyard from a 3rd floor balcony.

I have passed Yandex office a dozen times – especially in the evening – and my eyes are always attracted by the bright colors and transparent facade that give the impression that this is a special place …. and my quick visit inside indicated it is.

Yandex’s HQ is part of the ‘Red Rosa 1875‘ business complex, a reconstructed 19th-century silk weaving factory that is situated close to the Moscow River across from popular Gorky Park.

After the Communist Revolution in Russia, the factory was nationalized and renamed ‘Krasnaya Roza,’ or Red Rosa, in honor of murdered Polish socialist activist Rosa Luxembourg.

The area around Yandex’s headquarters is being actively developed or refurbished, including one of the few buildings to survive the 1812 Moscow fire (photo below) 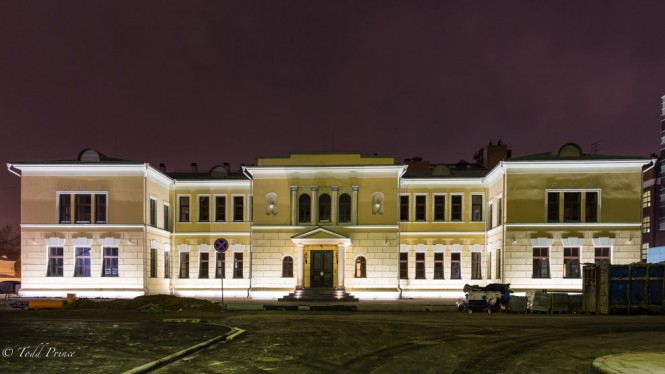 This historic building is situated within Red Rosa complex, but is still being refurbished.

Yandex’s interior is characterized first of all by bright colors with each floor having its own color – orange, yellow, green, red. Secondly, it has non-linear hallways and meeting-room windows, giving the atmosphere a creative touch.

On the floors I visited, people work in open spaces as you would expect in Silicon Valley. Posters and dart boards hanging on the wall indicate Yandex workers feel it’s their space as well. There is no indication of hierarchy.

Wall decorations also indicate what Yandex does (in case you weren’t fully aware). For instance, a street light standing in the middle of one floor reflects the real-time traffic conditions in Moscow, a feature of Yandex’s popular maps application.

There are large conference rooms used for lectures and one was going on around 7pm when I was there.

Not surprisingly, a Starbucks can be found in the Yandex building, occupying a corner on the 1st floor that looks out onto the courtyard. Yandex employees working on their laptops can be found there. 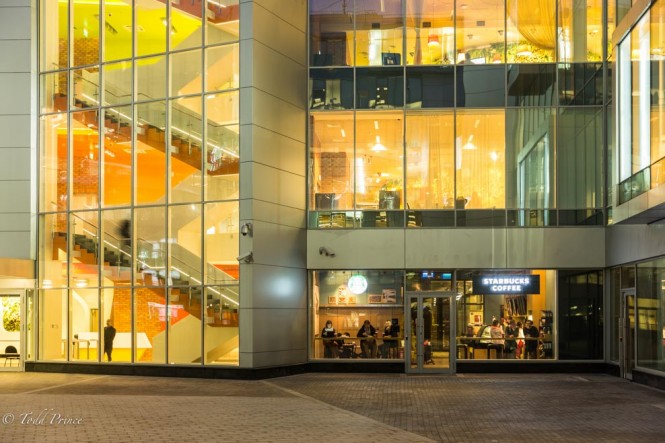 A Starbucks occupies a small corner within the Yandex building.

Moscow still has quite a few old factories areas that are ripe for turning into Class A business space and, fortunately,  more projects have been coming on.

I have finished the photo series below of Yandex with a photo of the refurbished Bolshevik factory, which is also now class A office space.  For the record, Yandex’s facade was done by Russian architecture studio Sergey Kiselev and Partners while Yandex’s interior was carried out by Atrium. 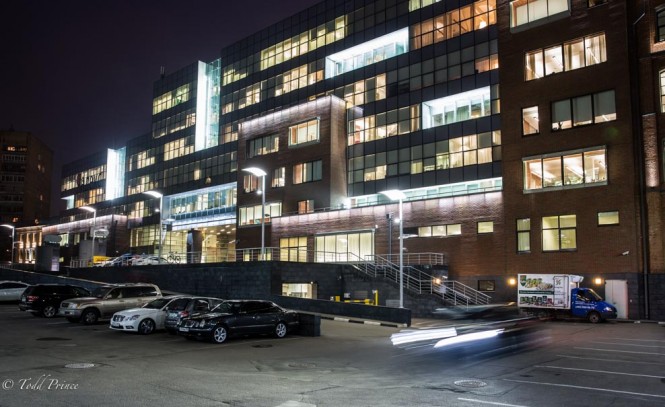 The Yandex headquarters’ facade. It is part of the ‘Red Rose 1875’ business complex that was once Russia’s largest silk weaving factory. 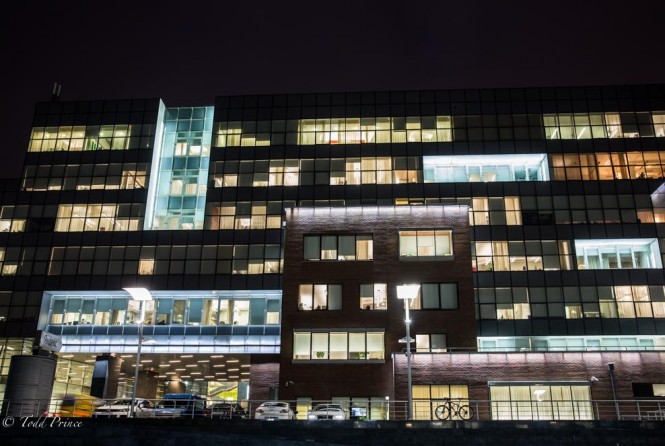 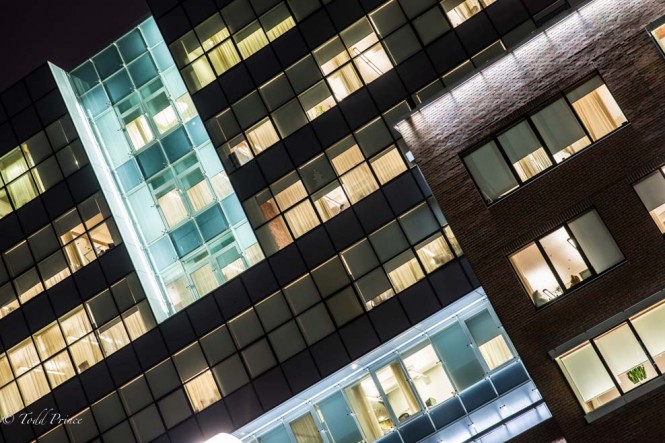 The Yandex facade, which was designed by Sergey Kiselev and Partners. 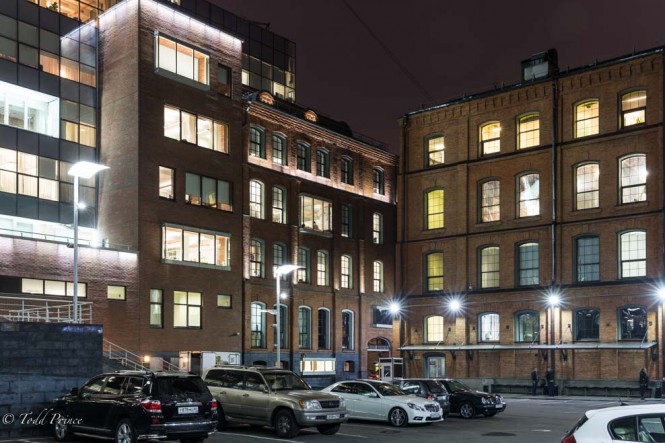 Inside the Red Rosa 1875 business complex. The Yandex HQ is to the left. The building on the right is occupied by various companies. 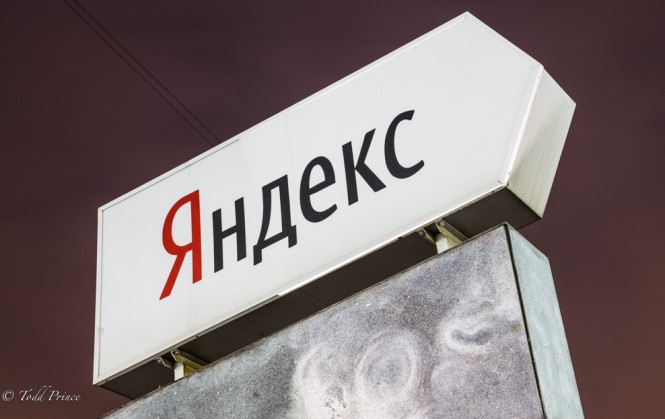 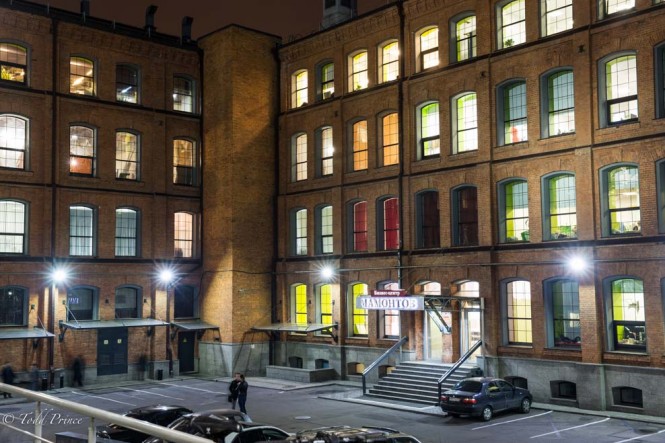 The part of the Red Rosa 1875 business complex opposite the Yandex building. 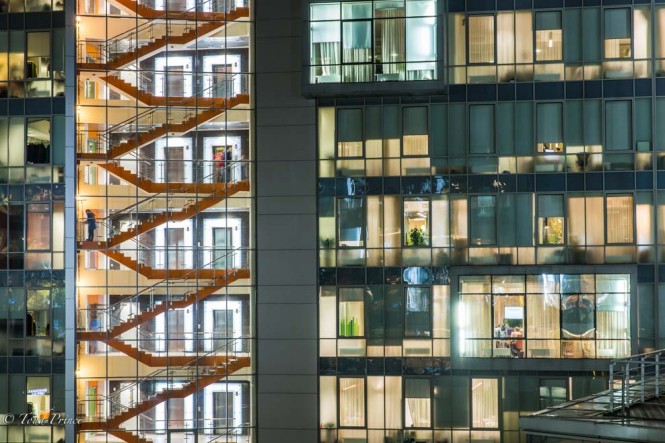 This picture was taken from the open balcony area on the 3rd floor of the Yandex office. 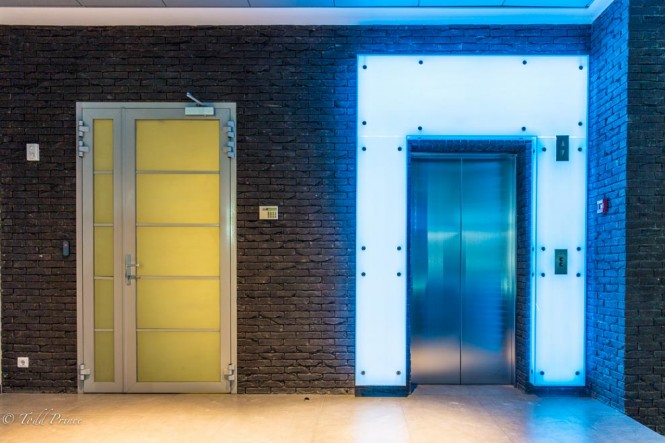 A blue-neon light highlights the elevator entrance on the 3rd floor. 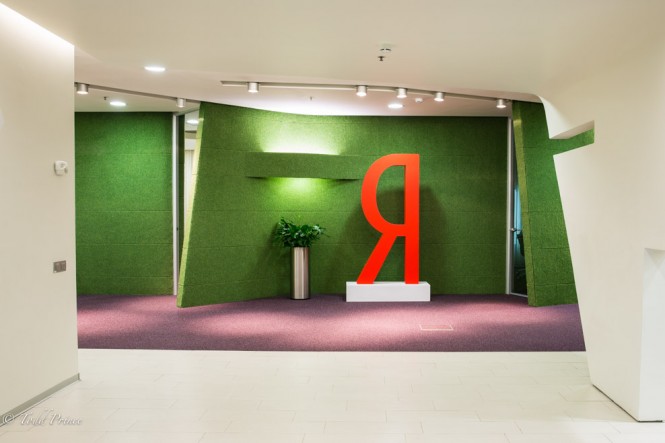 The entrance to one of the floors in the Yandex building. The ‘Я’ is the first letter of Yandex in Russian. 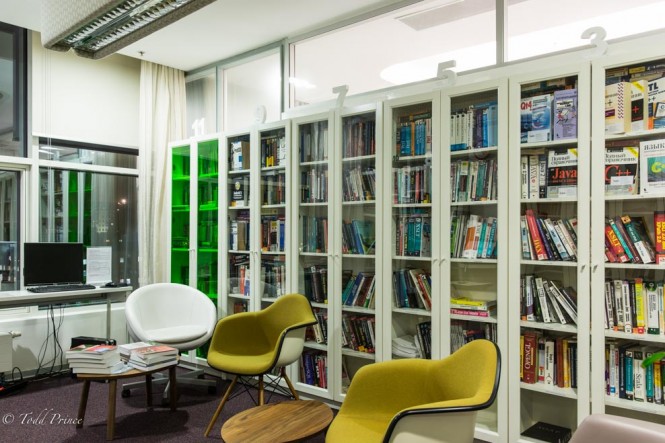 The library room in the Yandex office. Books on Java, HML, Web Design and other related topics. 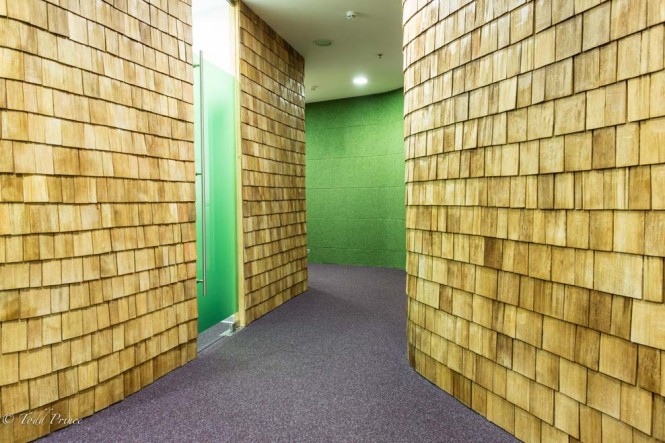 Some of the Yandex hallways curve and most are painted in a bright color, like green here. 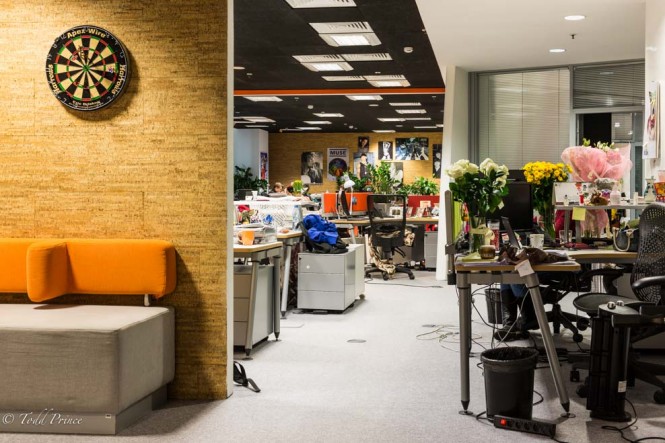 A dart board to the left. In the back, posters of artists and musicians hang on the wall. On the right, a worker’s desk is filled with flowers, probably indicated it was her birthday. 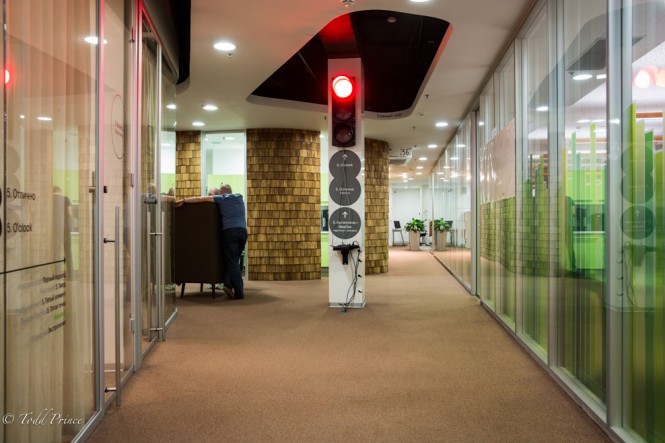 The red light here indicated the traffic in Moscow was very bad – typical for a 6pm on a weekday. 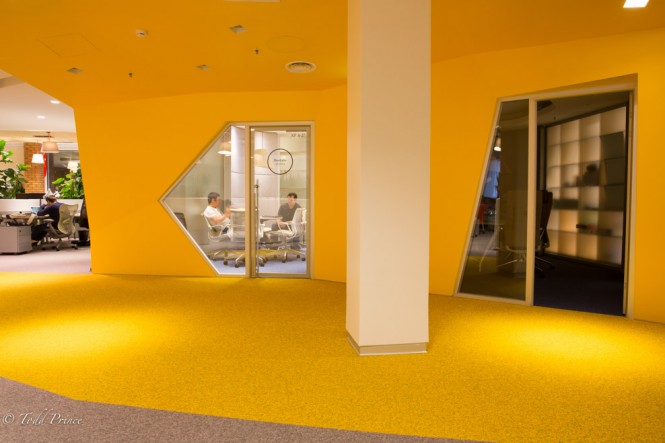 A meeting room on the right. Notice the creative shape of the windows, bright yellow color and green plants (far left) 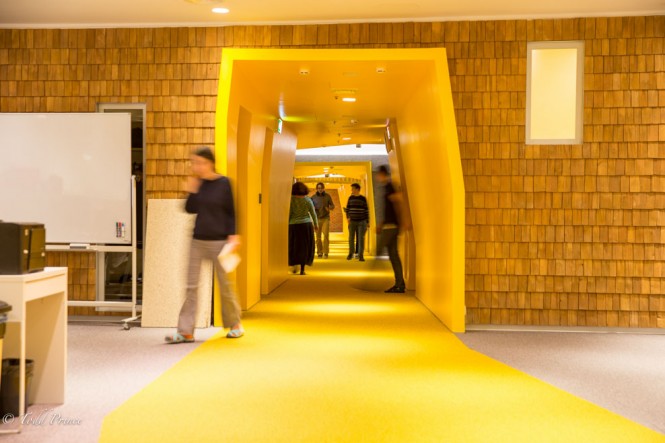 Yandex employees moving through the halls. 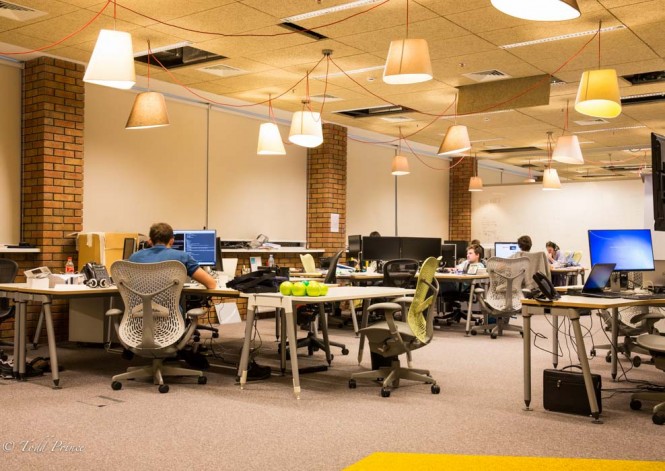 Open work space is a hallmark of Yandex, but not of most Russian companies. 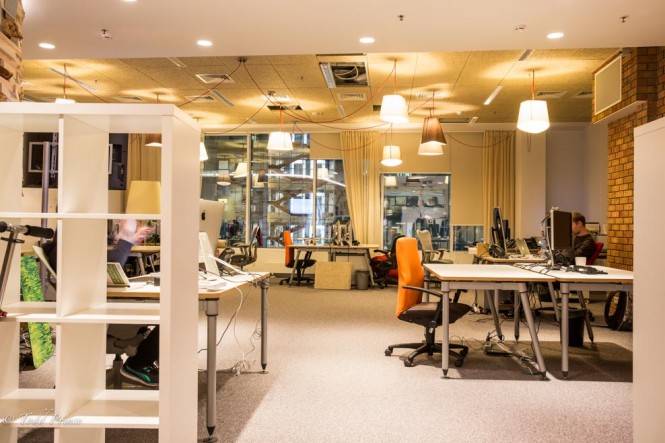 A work area in Yandex around 7pm at night. 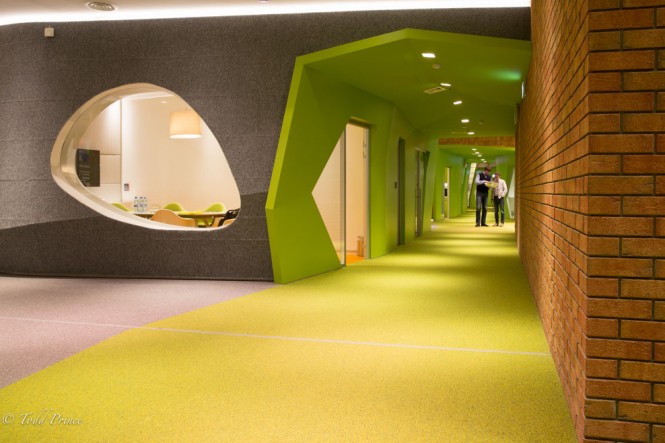 A green hallway in the Yandex office building. 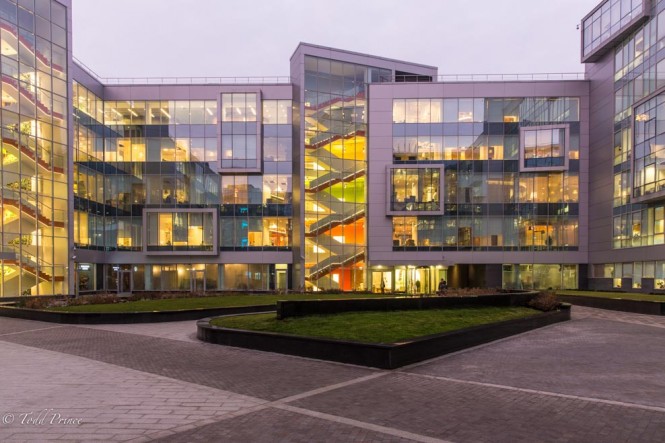 A look at the courtyard inside the Yandex building at dusk time. 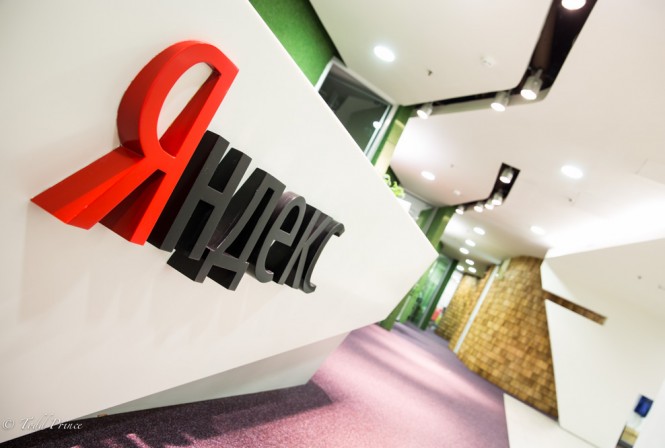 One of the Yandex reception desks. 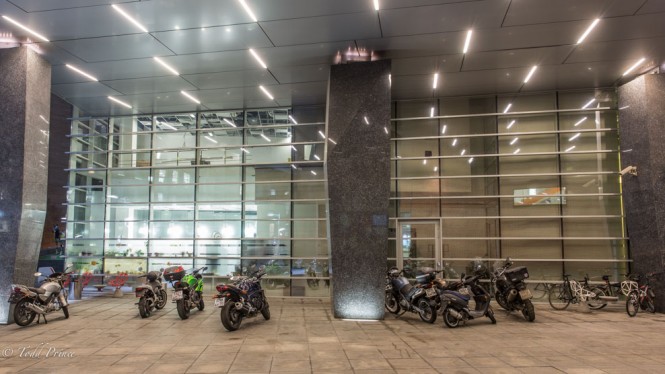 Like the Red Rosa 1875 building, this former Moscow factory was recently refurbished and converted to an office building.