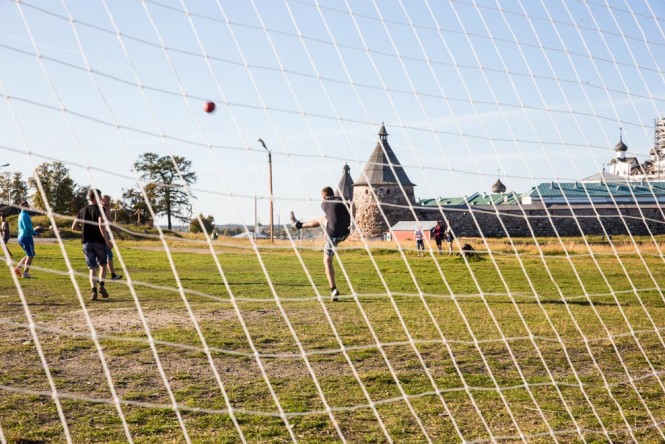 The goal keeper, a construction worker during weekdays, kicking a soccer ball near the Solovetsky Monastery.

The early evening autumn sun threw its rays over the makeshift grassy soccer field located on the side of a village dirt road, creating greater than life-size shadows of the men playing on it.

Ranging in age from their 20s to 40s, the men yelled and pushed as they kicked the ball toward the goal post, the 15th century Solovetsky Monastery rising a few hundred meters away in the background.

It wasn’t just the medieval stone fortress and monastery on the northern Russian island that made this otherwise everyday sporting activity remarkable to me.

The players – seasonal construction workers repairing the UNESCO world heritage site –  hailed not only from various towns in Russia but also central Ukraine. In fact, most were Ukrainian as I was told.

At a time when one hears stories about Ukrainians not speaking to their relatives in Russia and vice-versa, it was uplifting to see people can seemingly set aside differences arising between their governments and get along. 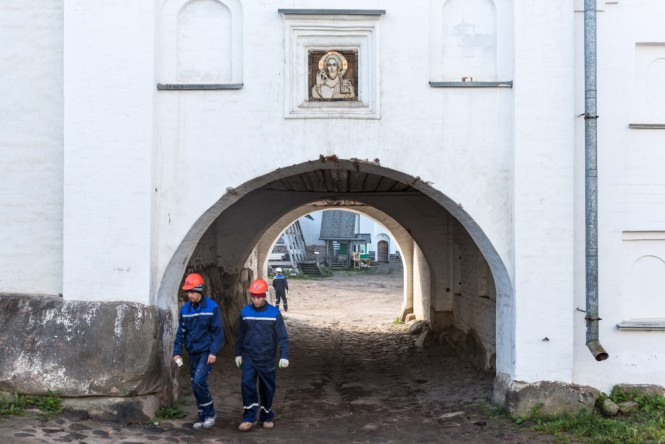 Construction workers passing through a gateway inside the Solovetsky Monastery. A photo of Jesus hangs above them.

While I didn’t speak with enough of the workers to get a truer sense for how cordial relations really are on Solovetsky Island, the little I heard and saw indicated it wasn’t much of an issue.

Perhaps the solemn atmosphere of the Solovetsky Monastery has its effect on the workers; it is after all one of the most famous Orthodox Christian sites in Russia. Priests dressed in black cloak are criss-cross the territory all day, passing workers as they carry construction material or replace bricks.

But Solovetsky’s remoteness probably also plays a role in maintaining cordial relations. With no more than a thousand residents on the small island, there is little for the workers to do in there free time during the short summer months other than fish, gather mushrooms in the forest or play soccer …You either get along with your co-workers or your have a very long, difficult eight months. 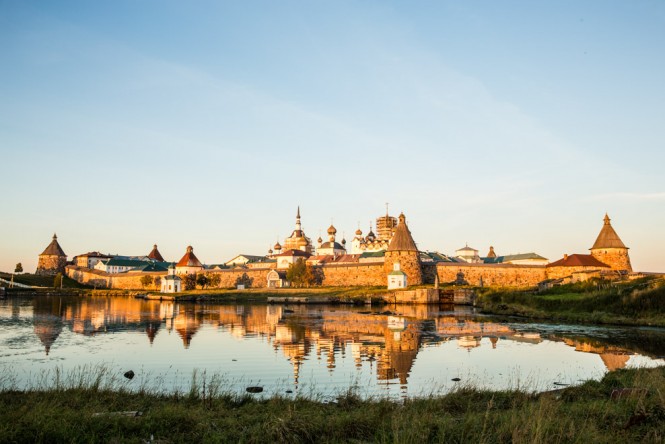 Solovetsky Monastery during an autumn sunset.

It is exactly that remoteness from the world that made a few Russian monks in the 15th century decide to build a monastery on Bolshoy Solovetsky – one of the islands that makes up the Solovetsky Archipelago in the White Sea, some 100 miles south of the Arctic circle.

And it is that remoteness – and massive stone fortress – that helped it fight off enemies for a few centuries, both foreign and domestic. The six-meter thick wall stands 11 meters high. The size of the stones makes one marvel at how the fortress was even built during the 16th century.

As technology and warfare developed over the ages, the fortress and monastery became penetratable by enemies, among them the Bolsheviks. Solovki’s religious heritage wasn’t useful to the communists, but its remoteness was. They turned the island into the Soviet Union’s first gulag, or prison camp. 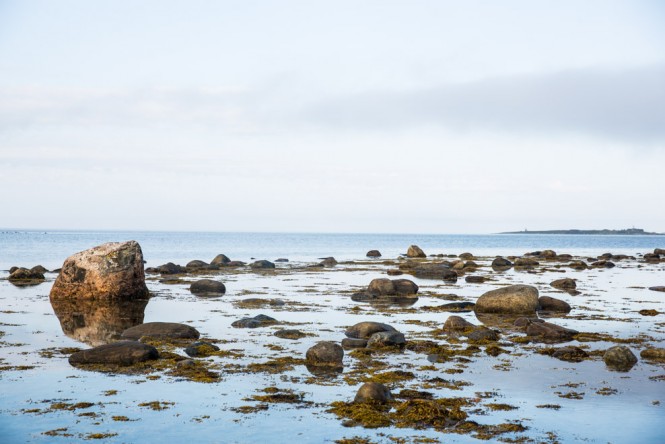 The barren side of the island strewn with large rocks.

Far from the eyes of the public, thousands of people were brutally murdered on the island, a heart-wrenching story that tourists can hear about during some of the 20 summer excursions that Island’s tour agency offers. The tours range from $5 to $10 dollars and include visits to some of the archipelago’s other islands.

The end of the Soviet Union saw Solovetsky’s revival as a monastery. Now, thousands of Russians make the pilgrimage to Solovetsky Island each year. Some of the faithful – mainly retired women – come from far away to stay for a few months on the island. They help out at the monastery, which offers free accommodation in return.

Due to the neglect during the Soviet decades, the monastery was in terrible disrepair by the 1990s. Financial upheaval in that decade limited the state’s ability to significantly improve its condition.

Despite the current economic crisis in Russia, the state is moving ahead with a major renovation of the monastery. Crumbling bricks are being replaced with new ones and walls are getting a fresh coat of paint. 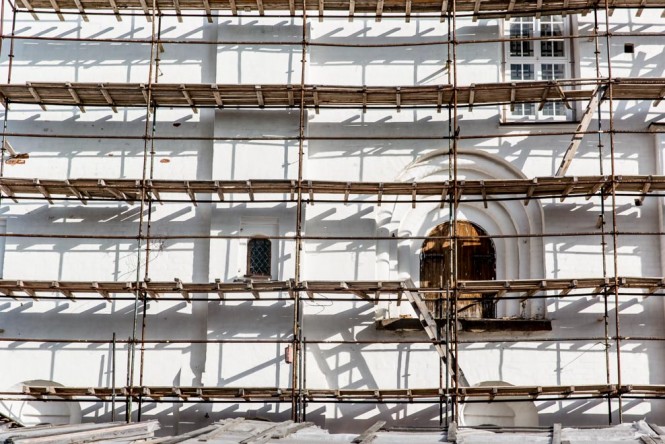 Scaffolding on the church inside the Monastery walls.

Those soccer players on the makeshift field were just a few dozen of what seems to be a hundred or more construction workers active on the site at the moment. It may just be the Russian Orthodox Church’s biggest project at the moment.

Inside the fortress walls, workers stand next to the cupolas on the roof of the church. Down below, others are pushing wheel barrels. ‘Tick, tick tick’ can be heard as the men use small hammer-like tools to remove the old bricks.

While the reconstruction is necessary, the scaffolding atop the cupolas and the construction noise are a bit of a disappointment to some of those that come to paint or photograph the monastery.

As the weather is brutal in the winter time, the reconstruction work runs from about April to December, according to one of the workers. It may take another two years to finish the work, he said. 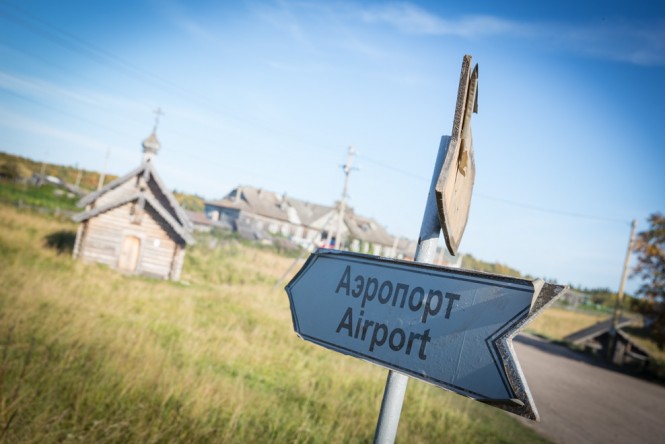 Getting to Solovki isn’t difficult. You can either fly in a small, Soviet-made AN-24 propeller seater plane via the northern city of Arkhangelsk, or take a boat from the towns of Kem or Belomorsk. I chose the former and its was fine, though a bit tight.

As I went in the autumn, the tourist flow was low and home stays were easy to find and relatively cheap. I stayed in an attached home with bedroom, kitchen and bathroom for 800 rubles, or about $13 a night.

I found it on booking.com and the owner met me near the monastery and walked with me back to the home, her bicycle by her side. In the summer time, homes stays can range from 2,000 to 3,000 rubles.

Bolshoy Solovetsky Island is small, so one can simply walk from the airport to the accommodation in about 20 minutes….assuming you don’t have much luggage.

Getting around the island by foot is easy, though be sure to pack a bit of water or snacks as you will not pass any kiosks along the road! Locals often bike around the island and there are two bike rental spots near the monastery. 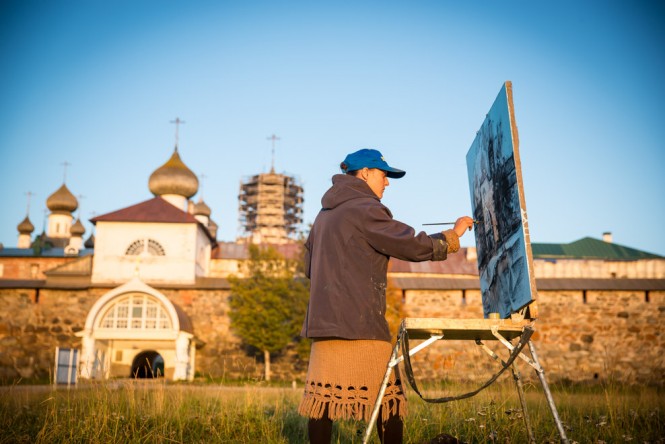 A Belarusian girl painting in front of the Solovetsky Monastery during sunset.

How long to stay depends on what your are seeking. Solovki – at least in the autumn – is a great place to ‘get away’ from it all and look for artistic inspiration in the nature. I came across a few artists painting the landscape during my two-day stay. They had been living on Solovki a few weeks.

There are two convenience stores selling food and beverage on the Island. The lines were about 7- to 8-people deep the first two times I walked in as it was during the construction workers’ break time.

Not surprisingly, the number of cafes and restaurants are few, mainly based in the hotels. 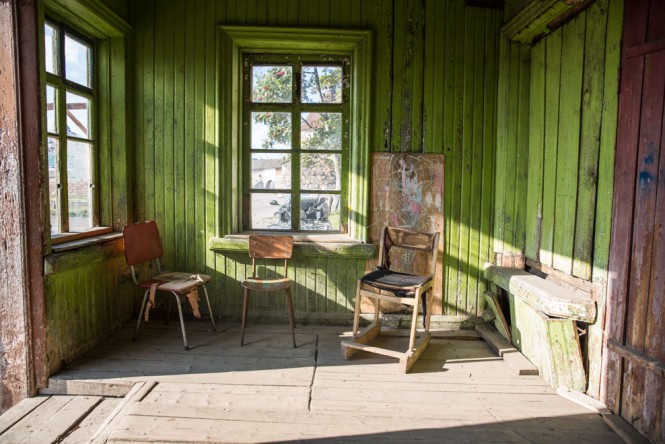 The entrance of a home on Solovki.

The island’s housing mainly consists of old, wooden homes, though I did notice two new structures being built. As a cold island covered in forest, wood is the source of heating, with residents’  sheds full of chopped wood as the winter months approach.

That makes for great photography subjects and is one reason why Solovetsky Island is one of my favorite photography spots  in Russia. If you are lucky, you can catch the Northern Lights from there. The island can be visited year-round by plane assuming good weather.

There is no wrong season to go and photograph Solovetsky Island, though the deep winter months don’t offer much daylight. Locals recommended coming in March, when its still covered in snow, but daylight is greater.