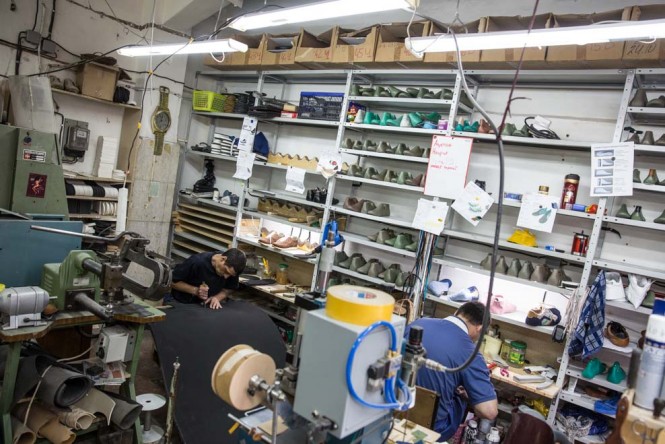 Two workers at AFOUR’s workshop in the Victoria Shoe Factory.

On a quiet street eight kilometers south of the Hermitage Museum in St. Petersburg stands the sprawling, red-brick, six-story Victoria Shoe Factory, which looks like so many pre-revolutionary factories around Russia.

Built in 1914 during Czarist times to produce men’s shoes, the premises were expanded over the coming decades under the communist rulers to include production of women’s and children’s shoes.

The communist authorities also changed its name from the initial ‘Nevsky Shoe Factory’ to the ‘Proletariat Victory Shoe Factory‘ and added a statue of Vladimir Lenin to the courtyard. 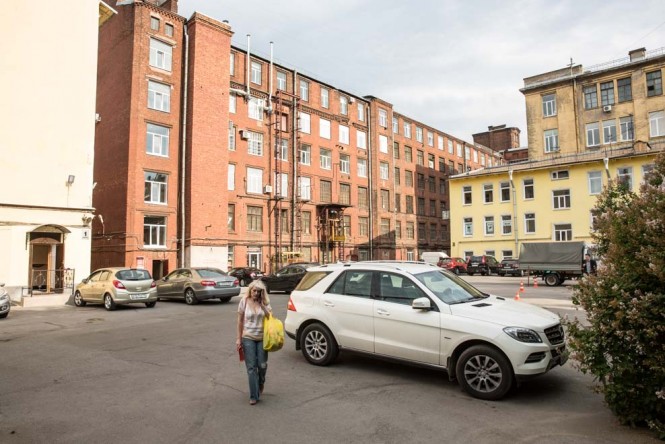 The entrance to the Czarist-era Victoria Shoe Factory. The Lenin statue is to the right.

Like so many consumer good factories across Russia, it suffered during the 1990s and went bankrupt.

However, the premises are still occupied by shoe makers as well as leather goods producers.

Dozens of entrepreneurs have started up small-scale businesses here because of the existence of relatively cheap space, shoe production equipment and stocks of wholesale leather. 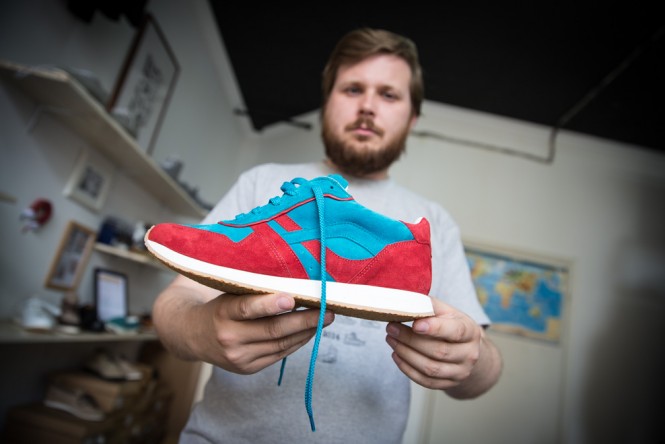 AFOUR owner Vladimir, 31, showing off one of the hand-made sneakers.

Among the entrepreneurs working from the Victoria Shoe Factory, as it is now called, are Vladimir Grigoryev, 31, who started AFOUR Custom Footwear with a childhood friend back in 2009.

Vladimir said his interest in footwear goes back to his skateboarding days as a teenager in St. Petersburg in the late 1990s.

Foreign made sneakers were expensive and hard to get a hold of back then, he recalled. If someone got their hands on a pair of the latest sneakers, everyone would know about it, he said.

Due to the deficit in those days, St. Petersburg skateboarders would add a layer of leather to their Russian-made sneakers to prevent them from getting worn out so quickly, said Vladimir. 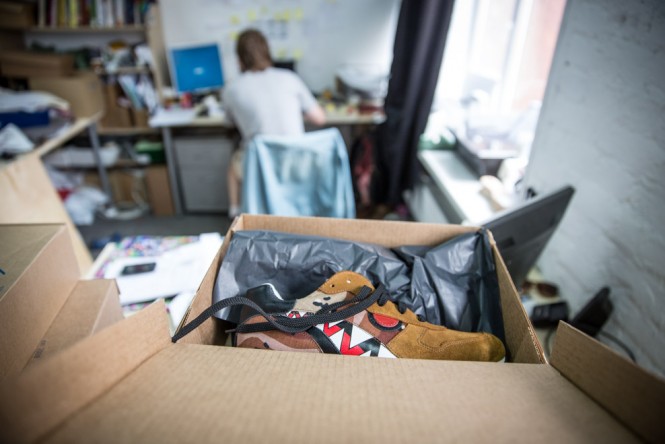 Vladimir in his office. A pair of custom-made shoes for a US client in the foreground.

One of Vladimir’s teenage friends would get his mom, who worked at the Victoria shoe factor, to repair his damaged sneakers.

Vladimir would initially team up with that teenager 10 years later to make shoes and sneakers before taking over the business when his partner sold out.

An economist by education and self-taught advertising designer, Vladimir took up reading Soviet-era manuals and watching youtube videos to learn the techniques of shoe making.

At first, he was hand producing only a few pairs per month on the side while working as a freelance advertising designer. 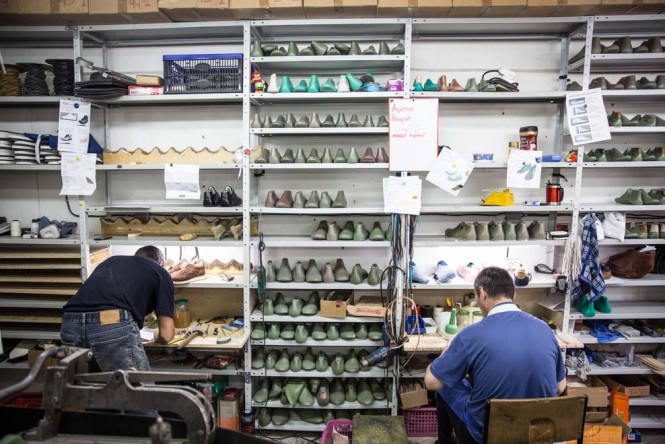 After finding some experienced people from the Caucasus and Central Asia to join him, Vladimir gave up his freelance work in 2011.

”I called my clients to tell them that I am now a shoe maker,” he said.

Over the years, Vladimir has been able to increase production to about 150 pairs of custom-made shoes and sneakers a month.  The sneakers retail for about 7,000 rubles.

Vladimir is using his profit to replace the Soviet-era equipment in his 30-sqm shop. He says its tough to go out on our own as you have to “be prepared to be your own cleaner, shipper, designer and economist.” 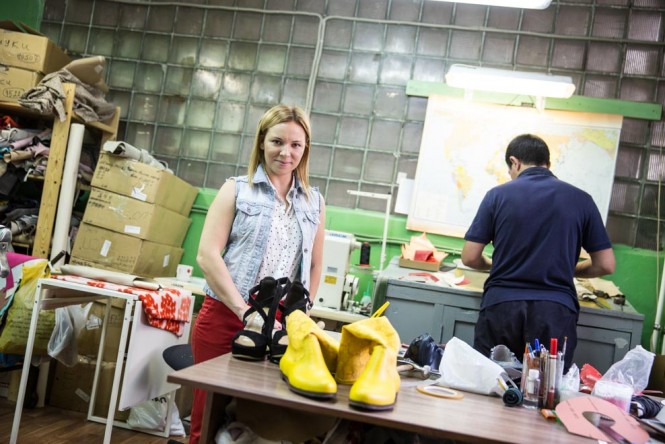 Unlike Vladimir, Anya Zakharova, 28, studied shoe design six years at a St. Petersburg university and took an additional one-year sewing course at night. After completing her degree, she took a course in Italy in shoe design at Polimoda.

Anya, who describes herself as a creative person, said she didn’t want to work for a shoe production company that was simply copying designs from existing brands.

That is why she struck out on her own after returning from Italy, first producing handmade shoes at home for friends and family. In 2011, she decided to create her own brand Z!Boot, with Z referring to her family name.

In the beginning of 2012, as orders picked up, Anya renting a 20 sqm shop in Victoria Shoe Factory.

Overwhelmed at first with doing the design, production, shipping and financing chores, her mom soon joined to take care of the accounting.

Anya produces from 50 to 100 pairs of shoes a week with the help of four employees including her mom.

Most of the buyers are based in Moscow and they typically find Anya through a Russian website dedicated to hand-made goods named www.livemaster.ru   The shoes retail between 3,000 and 12,00 rubles.

She says the Victoria factory is convenient because she can walk down one flight of stairs to buy the colored leather she needs. 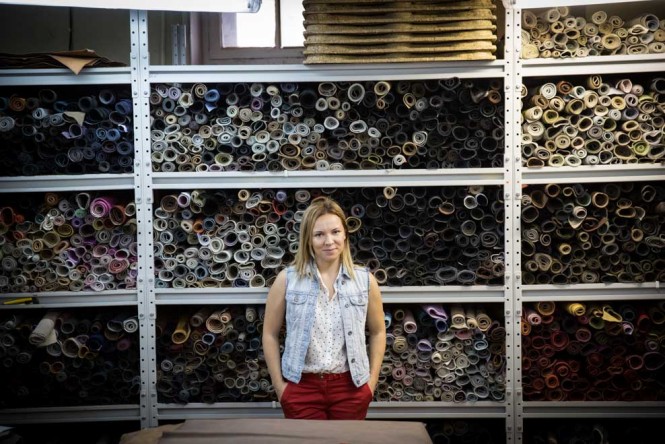 Anya, a shoe maker, standing in the factory room where she buys colored leather from Europe.

The long, corridors at the Victoria Shoe Factory contains many small rooms where people are working away – surrounded by aging equipment – repairing shoes and making handbags with the hopes of growing their small business.

Victoria is only one example in Russia of a former factory-turned-start up location for gutsy 20 and 30 year-olds.