Colorful pictures have been painted on the facades of many buildings around Moscow over the past year amid an attempt to beautify the city and add charm.

While the first paintings were apolitical works of art, post the Crimean annexation and surge in tension with the West, some of the paintings have become political in nature.

This past weekend, I saw one that really caught my attention as it summed up how the Kremlin views current events.

The painting is on the corner of the ever-busy Moscow garden ring road. I would guess that 100,000 people could pass by this corner in a single day you car, bus or foot.

The sign reads: “There are things more important than the securities market.” Beneath it is a book titled: “History of Russia 2014-2114.” 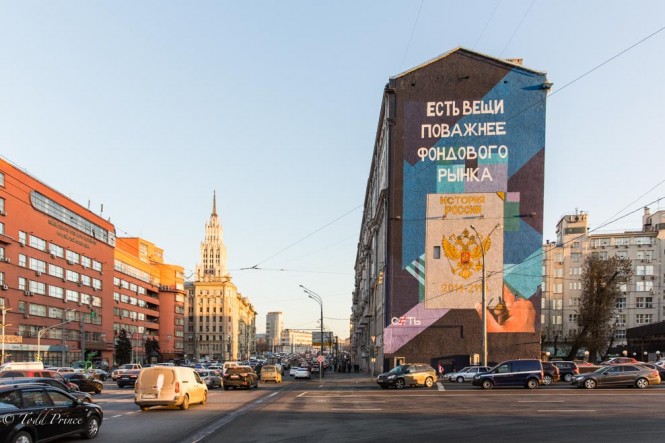 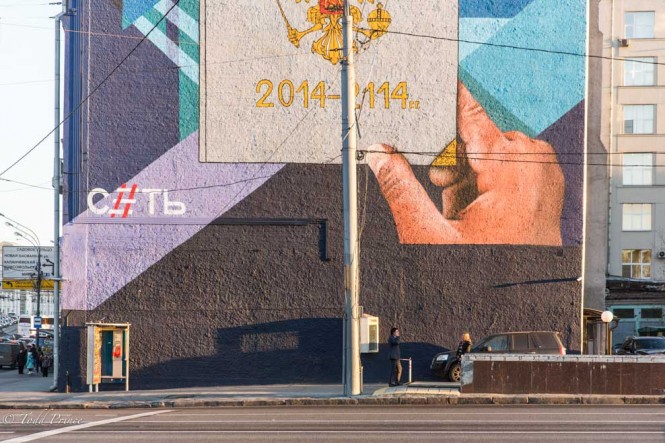 To me, it would imply that the Kremlin sees 2014 as a pivotal year in the history of Russia, one that will set the stage for the next 100 years…Will 2014-2114 be a century of Russia and the West in conflict and/or one of tighter Russia-Asia relations?

The sign clearly implies that the Kremlin is willing to sacrifice its securities markets – and consequently Russian GDP growth and living standards – to achieve its geopolitical aims and wants the population to accept that sacrifice.

Indeed, the Kremlin has already sacrificed its securities market. Russia and its companies have basically been cut off from international  bond and equity markets, in part causing the Russian stock market and currency to plunge.

That said, the Kremlin has never cared much about its stock market….in part because so few Russians are exposed to it. In part, because some in the Kremlin view stock investors as mere speculators who simply take dividends offshore.

There have been commentaries that the Kremlin will bend to the West’s demands once the economic situation gets tough inside Russia. This sign would suggest that is an erroneous assumption.

Ironically, the sign is located next to several offices of top Russian banks and financial institutions, including two belonging two Yuri Kovalchuk, one of the so-called friends of the Russian president who is on the sanctions list.

Perhaps this spot was purposely chosen to drive home that message of sacrifice to those that will be among the most impacted by the current standoff with the West – the bank and financial industry workers in Russia.