I woke up early Dec. 25 to a massive snow storm in Moscow that paralyzed traffic in my area and – based on many news reports – resulted in the worst traffic in Moscow in recent memory.

While reports differ, about 18 centimeters of snow may have fallen on Moscow yesterday. Wind gusts worsened the already tough situation, resulting in lots of road accidents.

Walking turned into a real exercise at some points, but city workers seemed to be nearly everywhere clearing paths. I photographed them clearing the area near the Eternal Flame to enable a smooth changing of the guard.

Some Muscovites took the snow fall in stride, with a few braving to bike ride across the city. Here are some photos from yesterday’s storm. 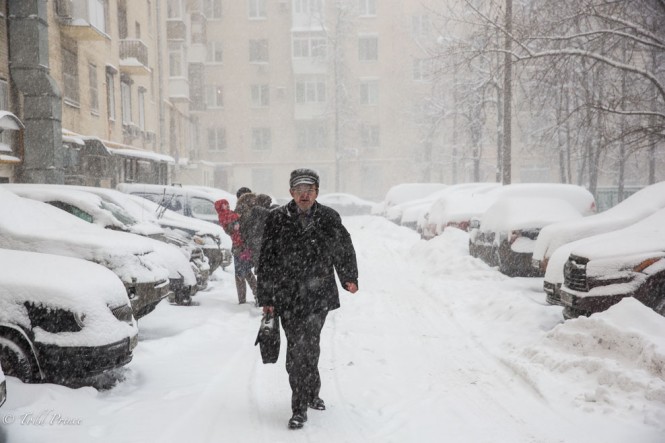 A Muscovite on his way to work during yesterday’s storm. 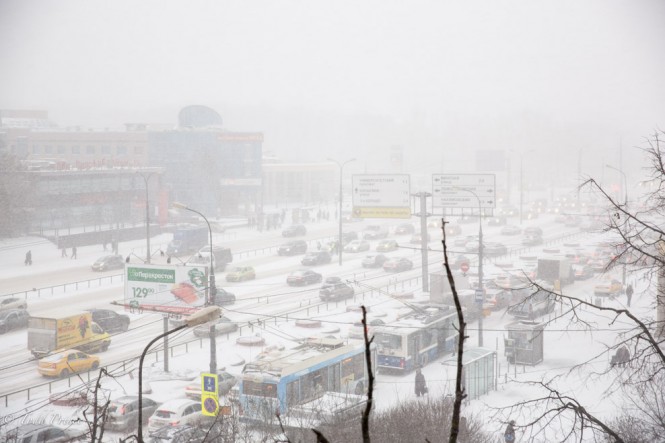 A bird’s eye view of the Moscow traffic.

A woman walks down a street using an umbrella to block the snow. 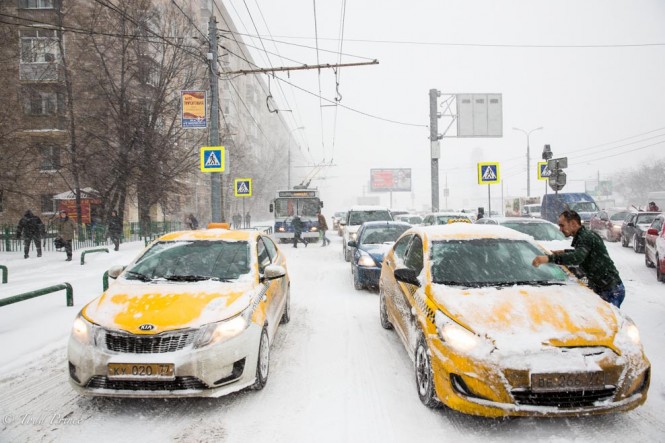 A taxi driver tries to clear ice and snow off his windshield. 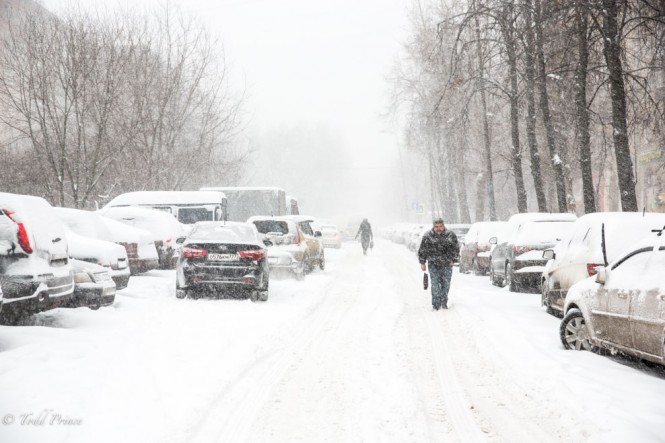 A man walking down a snow-covered street in Moscow.

Christmas decorations for sale sit in the snow as workers in the background make falafels. 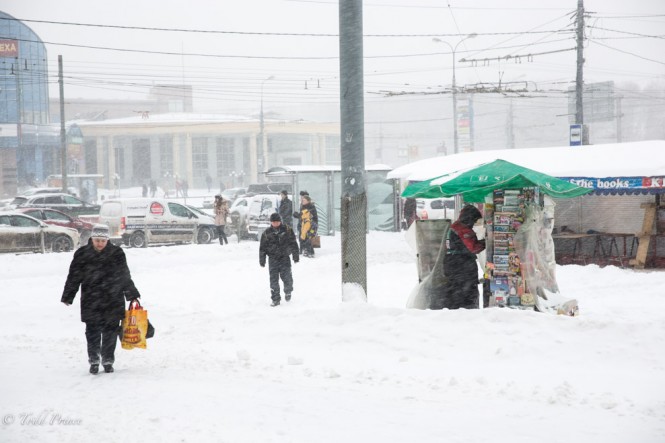 A newspaper seller stands amid piles of snow near a Moscow metro station. 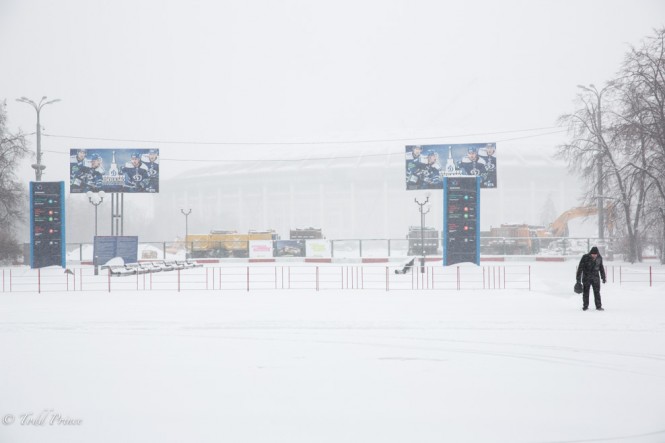 A man walks past a Moscow sports stadium on his way to the metro. 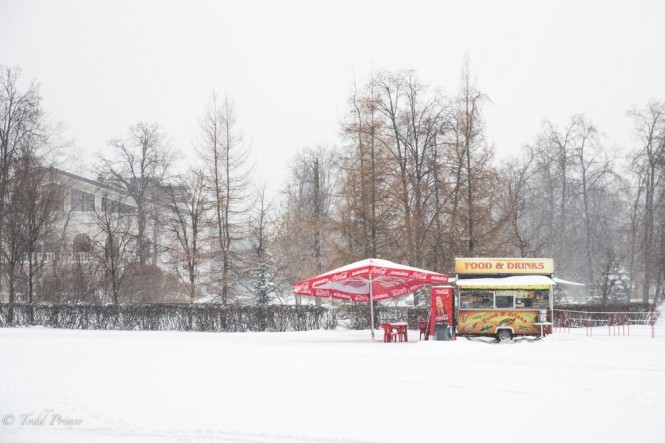 A food kiosk stands amid the snow. 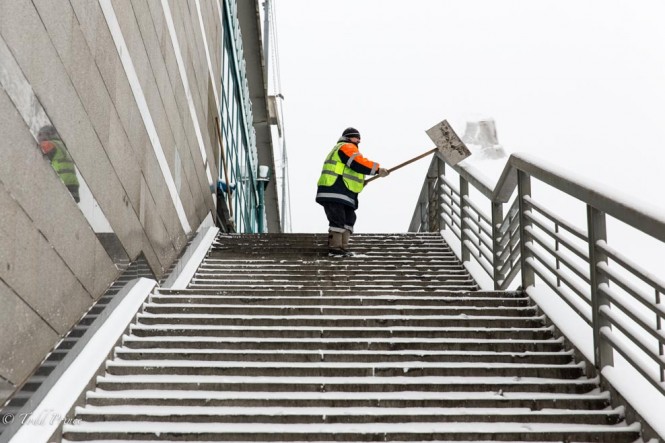 A city worker tossing snow off the pedestrian bridge. 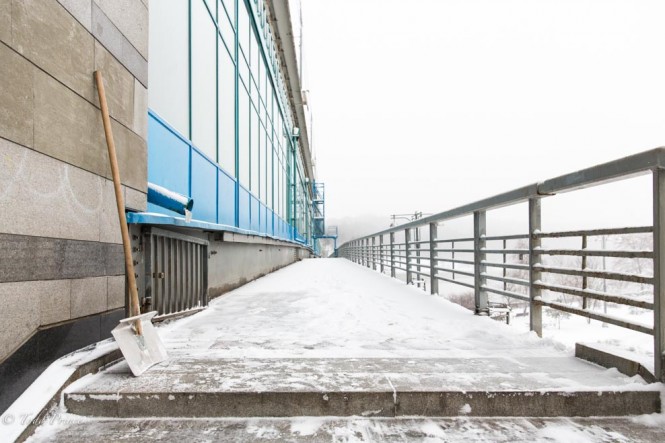 A car driving along one of the few streets where there was no traffic.

A city worker clearing snow on a pedestrian bridge. 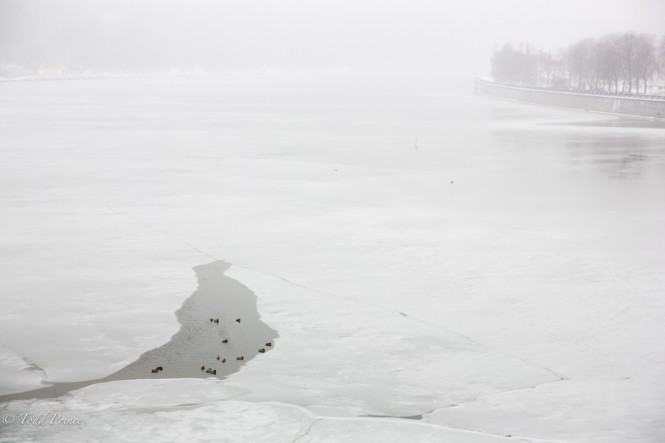 Ducks floating on the only non-frozen spot in this area of the Moscow River. 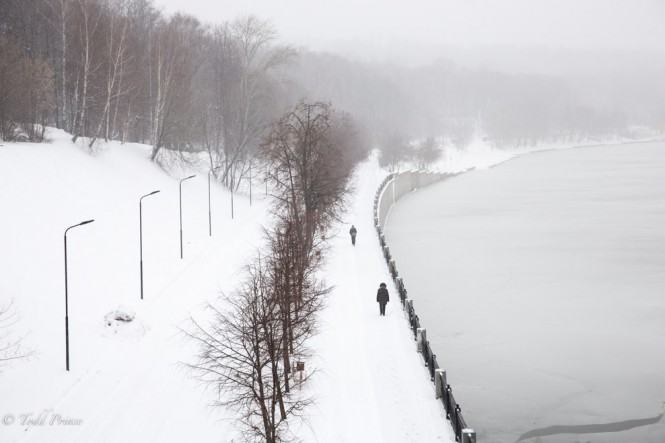 Two people walking along the Moscow riverside during the snow storm.

A man jogging along the Moscow River during the snow storm. 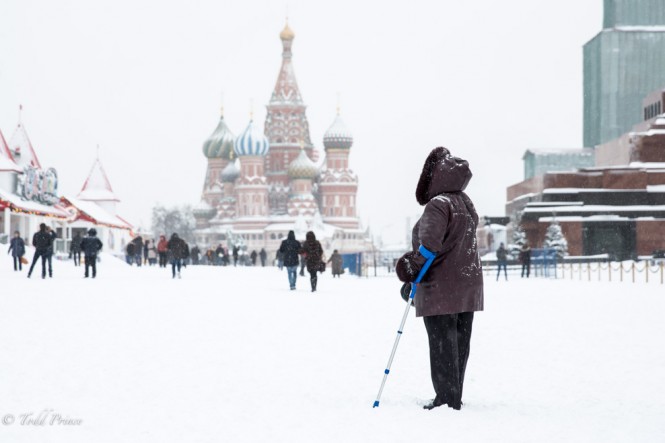 This woman walked around Red Square with the help of two canes. 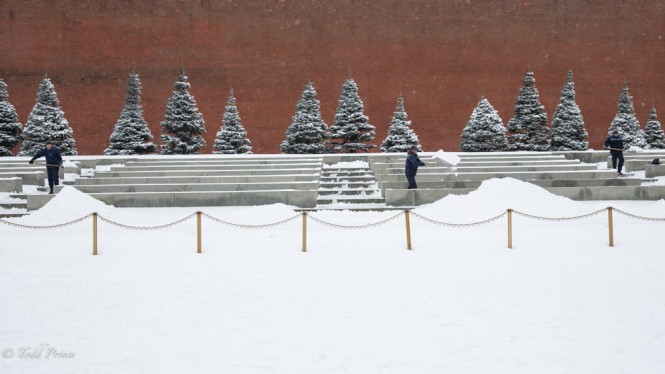 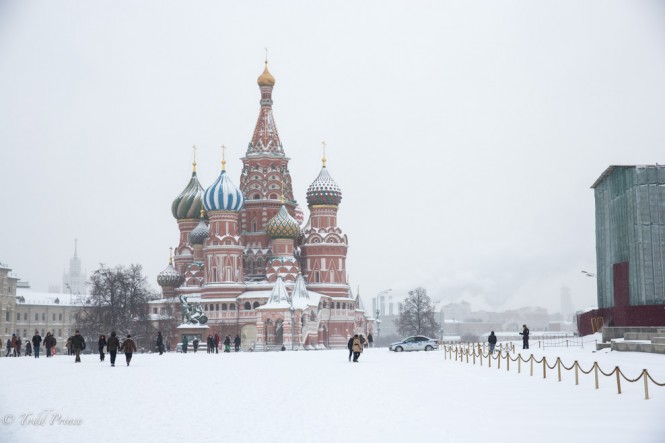 Snow covers the ground near St. Basil’s on Red Square. 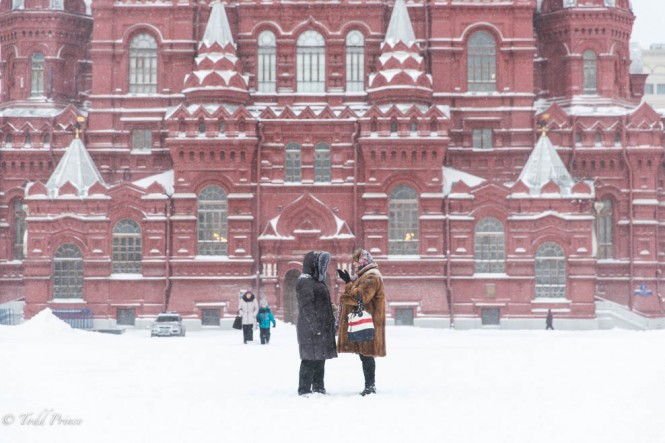 Two women talk a minute to talk on Red Square amid yesterday’s storm. 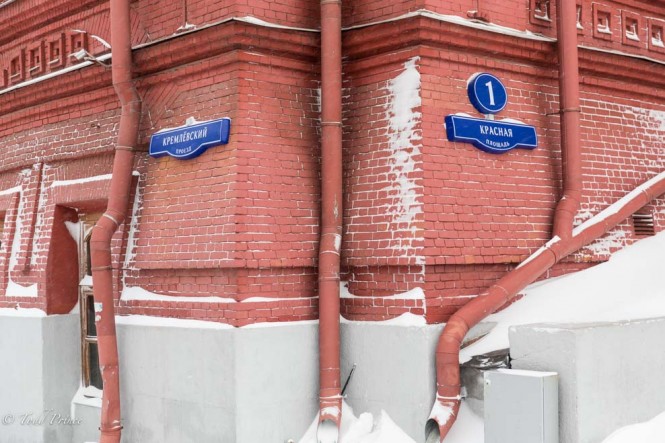 Snow clings to this wall on Red Square.

Cops chatting as worker clear the snow for the Honor Guard in front of the Kremlin Wall.

Workers clear the path so the honor guards can goose step in safety. 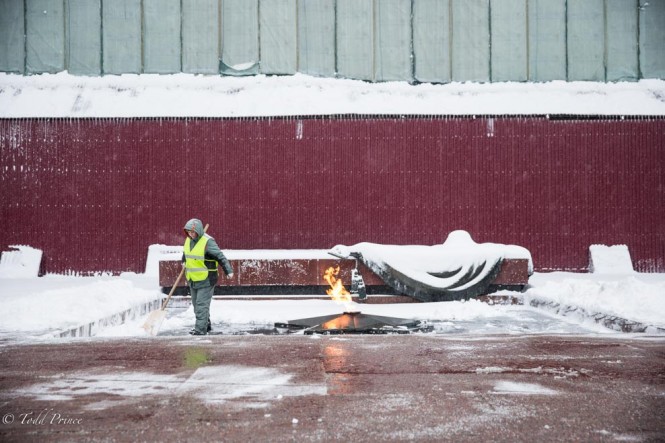 The snow storm can stop traffic but it can’t put out the eternal flame. 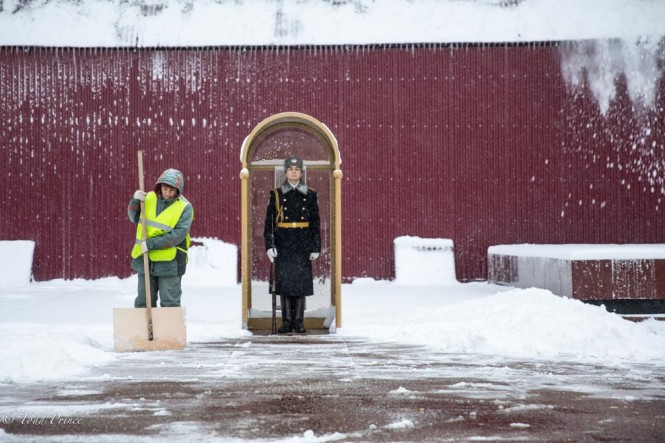 A city worker shoveling snow in front of the honor guard. 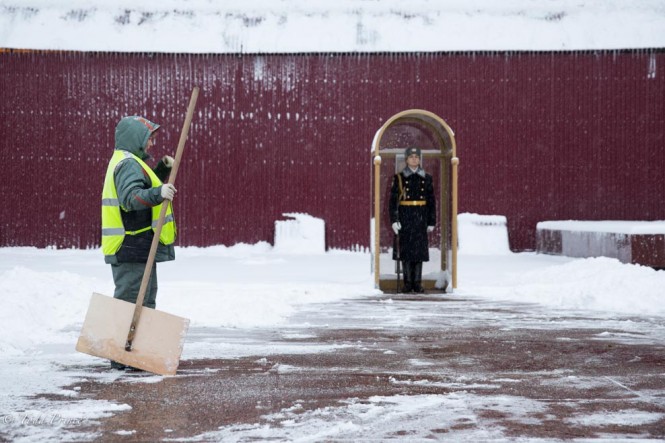 A city worker takes a pause from shoveling snow in front of the honor guard. 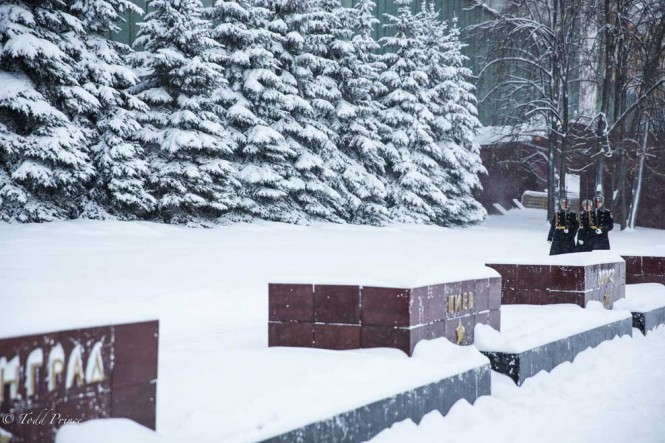 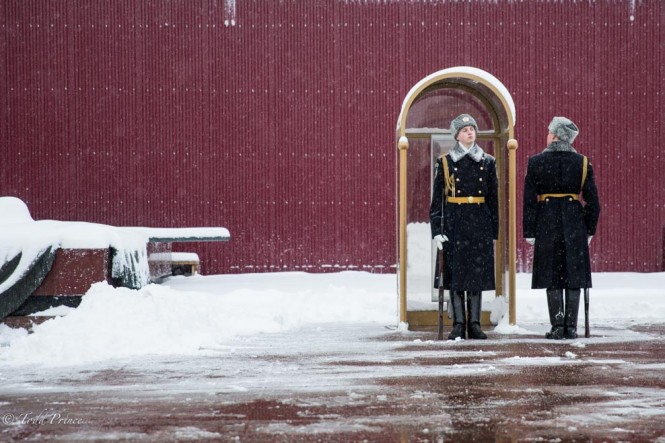 The changing of the guard amid yesterday’s storm. 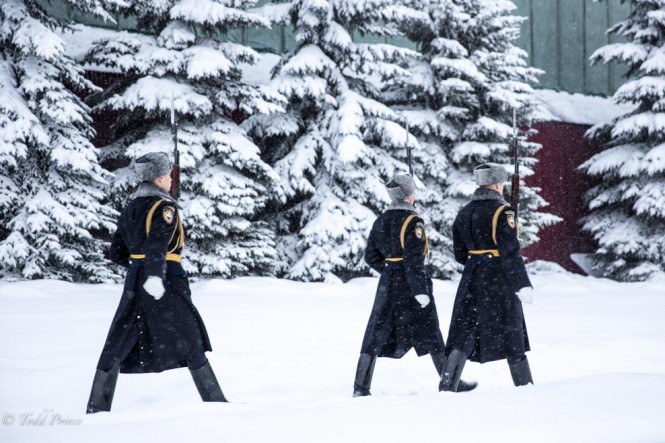 The changing of the guard in front of the Kremlin went smoothly despite the heavy snow.

Two women, both city workers, taking a short break as they clear the heavy snow fall. 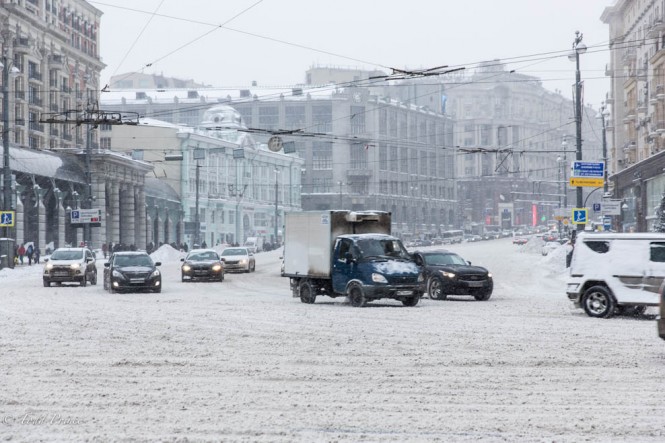 Cars turning onto Moscow’s Garden Ring road near the Kremlin.

A worker clearing snow in front of the Four Seasons Hotel near Red Square. 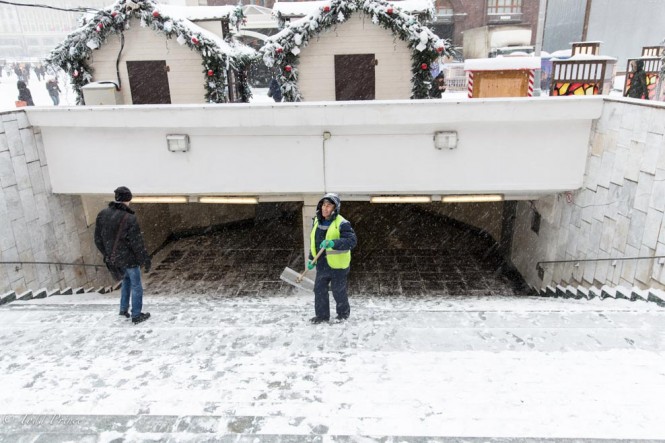 A migrant worker cleaning the metro entrance near Red Square. 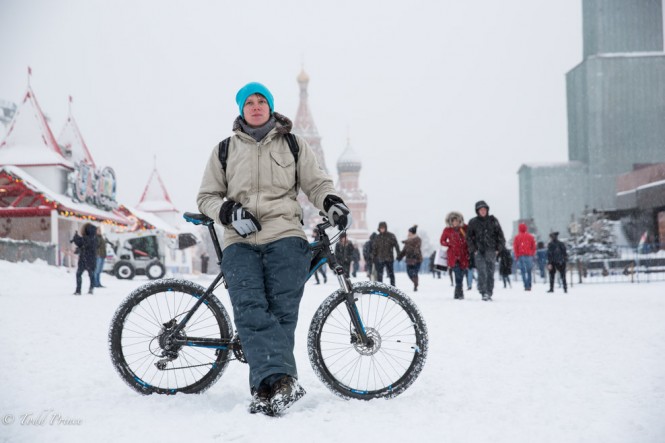 Ivan, 29, rode his bike about 7 kilometers to Red Square. 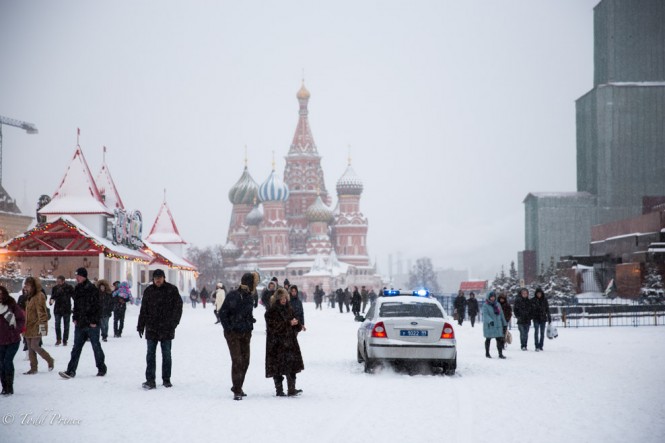 A police car rides through the snow on Red Square.