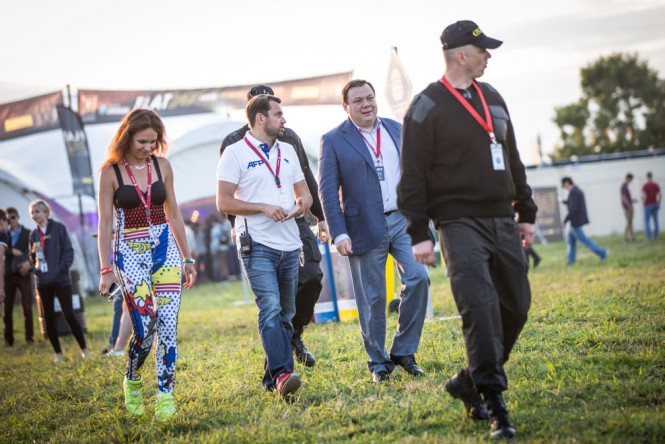 Mikhail Fridman, arguable Russia’s richest man at the moment, walked across the flat, grassy field 415 kilometers east of Moscow accompanied by two people giving him – seemingly – an update on the electronic dance music (EDM) festival he was visiting.

The thousands of concert goers on the field at the time were oblivious to the 50 year-old owner of Alfa Group that Forbes says has a net worth of $15 billion. He strolled right by them, no one but a photographer approaching him. 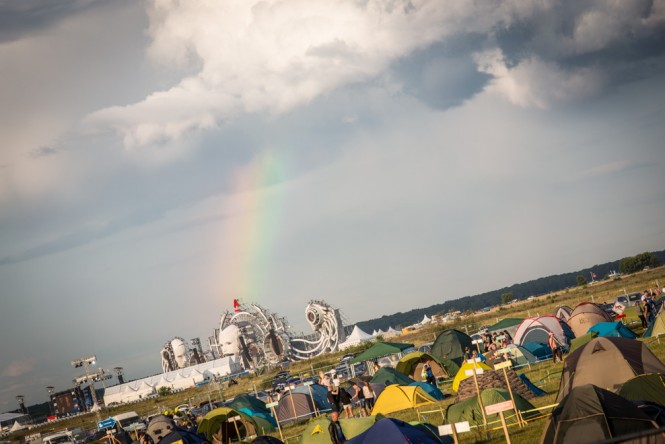 A rainbow extending down to the main stage at the Alfa Future People music festival.

It was an unusual site. Someone of his stature in Russia would normally be surrounded by several bodyguards in public and cause a bit of a commotion among the crowd.

Most of the roughly 40,000 people attending Fridman’s three-day ‘Alfa Future People’ festival that ran from July 17 to July 19 were probably at best just babies when he started to make his billion-dollar fortune.

And on this sunny weekend, they couldn’t care less about him and his money. 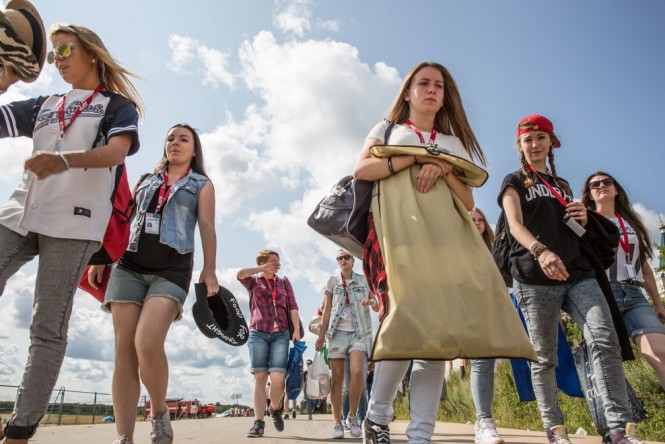 They were busy dancing to music from 120 performers such as Deadmau5 and Swankytunes, checking out the new Tesla car and iWatch at the technology center on the grounds or simply hanging out.

About 30 percent of the concert goers – mainly in their early 20s – come from Moscow while another 30 percent from Nizhny Novgorod. The rest come from the Volga towns of Kazan and Samara or St. Petersburg.

A night-time performance at the Alfa Future People EDM festival.

Russia hosts several large-scale, weekend-long, outdoor concerts, but Alfa Future People is the only one dedicated to EDM and the only one sponsored by a major businessman.

Nashestviye, Russia’s largest outdoor festival attracting some 200,000, is dedicated to Russian rock and managed by a radio station, while Kubana, which is dedicated to rock and punk, is produced by a low-key Muscovite. 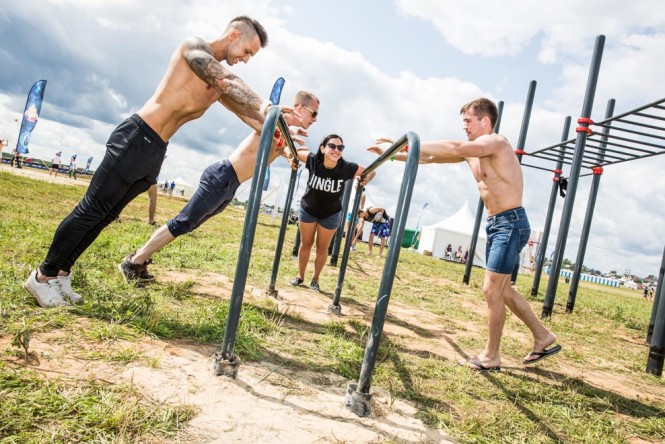 Russians working out on the exercise bars at the concert grounds.

As a well-known international figure with Fortune 500 business partners, Fridman can’t allow his concert to be perceived in the negative light that Nashestvie often is, with Muscovites sometimes describing that three-day rock festival as a drunkfest for provincial laborers.

Perhaps with Nashestviye’s reputation in mind, Fridman chose to describe the attendees at his Alfa Future People concert as ”normal people with normal faces.” 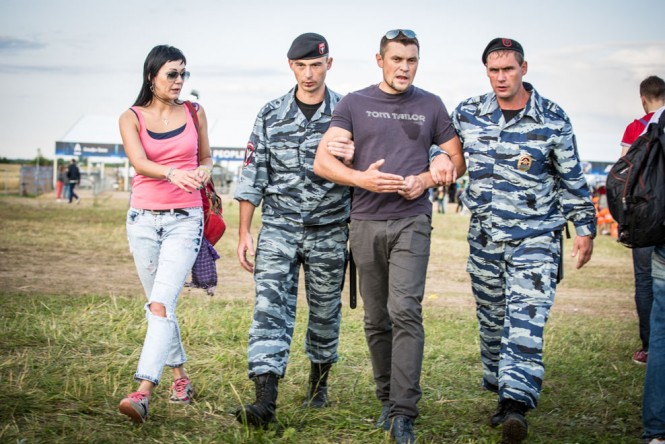 A man being led away by police – the only incident I saw love the three days.

While Nashestvie had tanks and guns on display this year for visitors and offered them survival lessons taught by professional soldiers, Alfa Future People had Tesla’s and iWatches on display in the technology hub and offered master classes on latest innovations such as 3D printing.

Alfa Future People does employ more advanced technology in its organization than its rivals. For instance, its concert grounds are ‘cash-free,’ with only cards or bracelets used for payment.

Concert goers getting their bracelets at the concert entrance.

Attendees can enter by scanning the e-ticket on their smart phone and are given a braclet that enables them to enter the grounds and special zones, like the VIP area. They can also put cash onto the bracelets.

All goods such as food and clothing are paid for either by touching the bracelet to a scanner or with debit and credit cards.

This presumably enables Alfa Group to better monitor how much vendors earn – and thus estimate if they are charging the vendors appropriately – as well make a fee from the transactions via their Alfa Bank card terminals.

The technology rooms on the concert grounds, where people could check out the latest iWatch and 3D printing machines.

Aside from the five music stages and technology center, the 50-hectare concert premises included 31 food vendors offering items such as burgers, gyros, salads, espresso and nachos as well as camping grounds.

For concert goers not owning their own tents, or finding it a struggle to transport their own tent several hundred kilometers, Alfa offered hundreds of ‘ready-made’ tents lined up in rows. 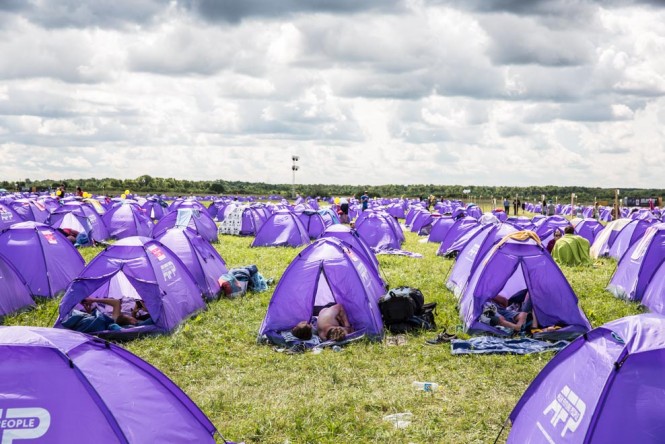 People sleeping in the ‘ready-made’ tents sold by the organizers.

For 6,500 ($115), visitors got their own small, puple tent for the 3 days and a bag with shampoo and gel from leading brands like Dove. The tents were theirs to keep. Washing facilities were set up nearby.

The concert started on Friday July 17 at 3pm, when the first performer kicked off, though people were free to come earlier, and ended on Sunday at 8pm.

Tickets to the concert for the full three days cost from 5,000 rubles ($90) for standard admission to 8,000 for VIP, which gives one access to dance floor zones and rooms about 10 meters above ground. 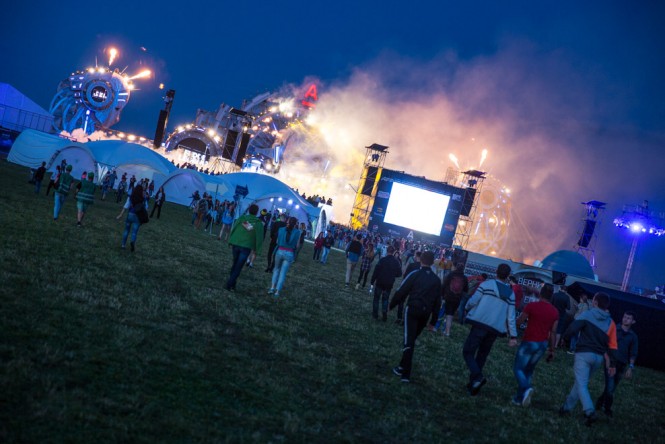 A light display accompanying a music performance on the main stage.

Additional trains were provided to take people from the concert back to Nizhny Novgorod. Visitors could take the 40 minute ride as much as they wanted, paying just once.

Musicians performed from late afternoon until early morning. In the late morning and early afternoon, visitors could take part in dance or yoga classes, work out on exercise bars or visit the technology center to check out smart watches, bracelets and 3D printers. 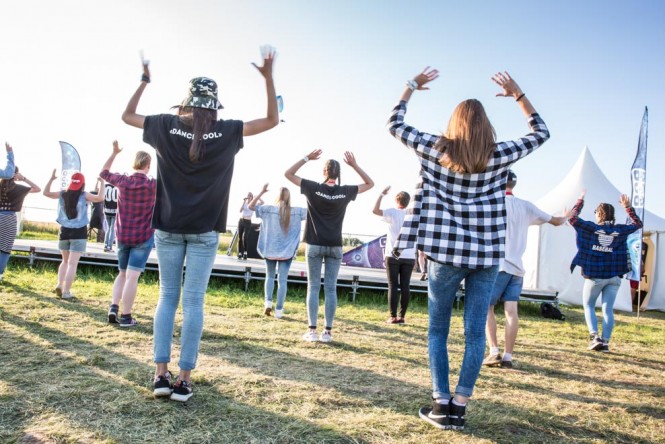 A dance class being held on the concert grounds.

The local village – Kozino – enjoyed a boom from the concert. Many of the attendees – students without much money – chose to make the two or three kilometer round trip to Kozino’s stores than buy food on the concert premises.

Local residents not only offered hot food, but extra rooms or showers for a fee. Due to the low temperatures at night – about 10c – demand for home stay seemed strong. 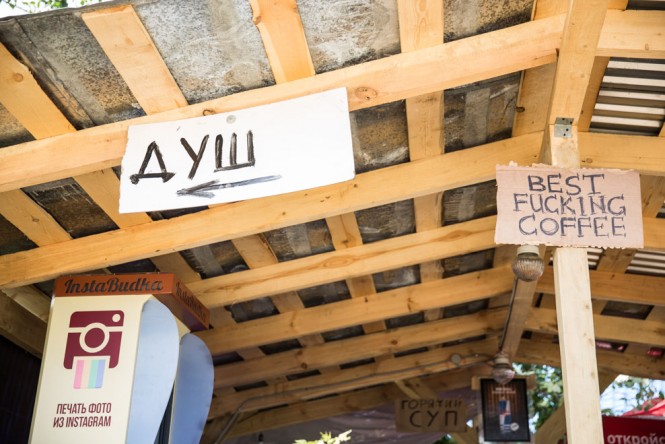 Local residents turned their homes into cafes and offered showers and home stays.

One man, still constructing his two-story brick house, offered spots on his second floor for 1,500 rubles. He had about 25 to 30 people stay both Friday and Saturday night and about as many that wanted to shower.

To see the full photo gallery from the concert, please click here.