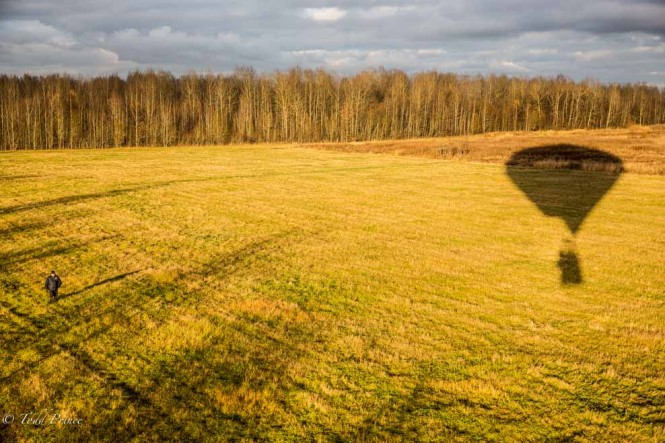 The hot air balloon throws a big, deep shadow on the ground as we land. The series of photos taken as we were landing are some of my favorite shots of 2014.

As I mentioned in my last post, I was invited to take part in a Russian TV travel program titled ‘Там хорошо, где мы есть,’ which translates roughly as ”The Grass is Greener on Our Side.” The program focuses on travel mainly around Russia and is generally three days long.

In my previous post, I wrote about Day 1 and the morning of Day 2, when I visited the imperial summer palaces Peterhof and Tsarskoe Selo.

On the afternoon of Day 2, we took a hot air balloon ride across the suburbs of St. Petersburg, passing over Tsarskoe Selo and other historical buildings.

The 45-minute ride was smooth for the first 44 minutes and 55 seconds, with the last five seconds a bit rough as we hit the ground hard. The view from the hot air balloon were spectacular, helped in great part by the good weather.

While there were a thick set of clouds in the sky at some points, the sun was able to break through at times, especially just as we were about to land, enabling me to capture one of my favorite shots of the year (above).

The air balloon approached a maximum hight of about 500 meters and flew for some time around 400 meters, making plenty of objects, like mothers with their baby carriages, visible. Than enabled me to capture some nice shots.

Two baby carriages approach each other on a narrow path in a St. Petersburg suburban park.

We flew over expensive homes as well as very basic dachas, or summer homes, which can be seen in the photo gallery below. The low flying altitude meant that the noise from the hot air discharge could be heard by dogs, leading to plenty of barking.

Overall, the ride was wonderful and I would highly recommend it as a way to see the wonderful landscape and interesting residences – both the imperial palaces as well as the typical dacha – of St. Petersburg region.

On day three, we visited a large, landscaped park, but we didn’t stay long as the snow came. We wrapped up the day by making borscht and trying Russian-styled donuts before heading back to Moscow on the 4-hour express train. 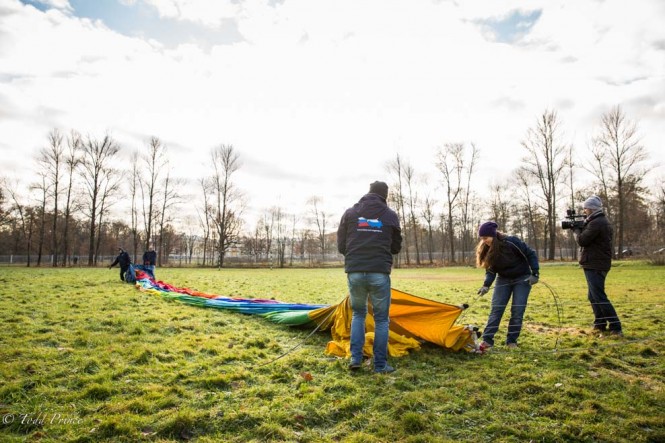 Workers preparing the hot-air balloon as the Russian camerman on the right captures the action. 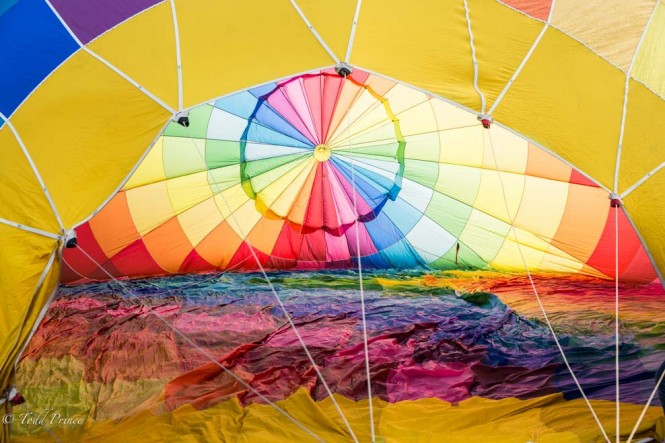 A photo of the hot air balloon as it is being filled up.

A photo of the hot air balloon as the team finishes blowing it up. 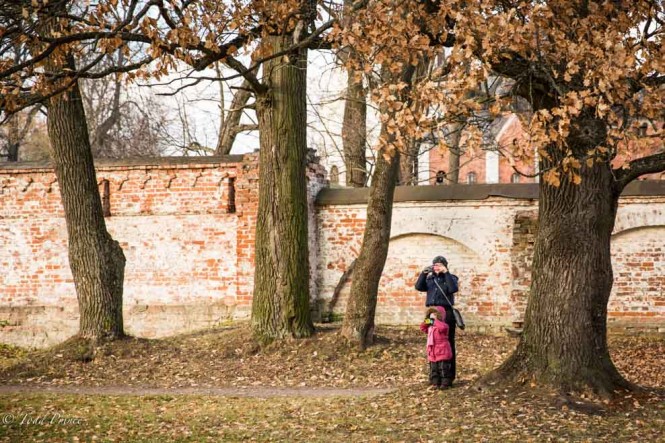 A child with a plastic phone imitates her mom in taking a photo of the hot air balloon. 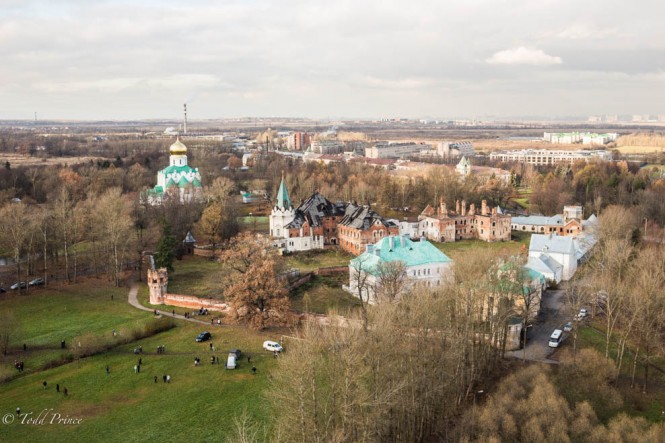 This photo was taking about one or two minutes after takeoff. We lifted off in a field next to some historical buildings. 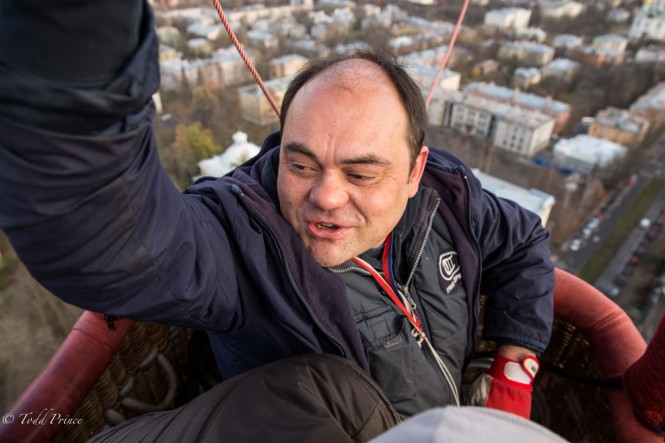 The streets of the St. Petersburg suburbs can be seen below the hot air balloon captain.

Tsarskoe Selo as seen from the hot air balloon. 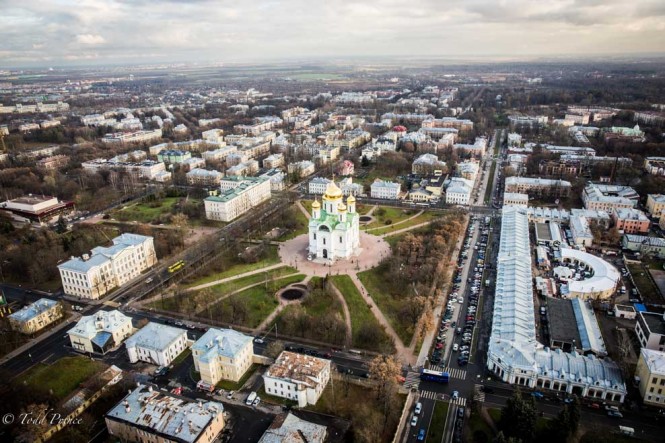 A church standing in the center of a square in the St. Petersburg suburbs. 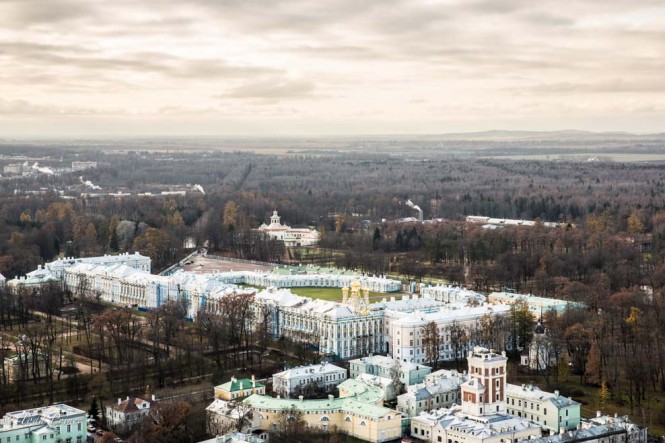 Another image of Tsarskoe Selo from the sky. 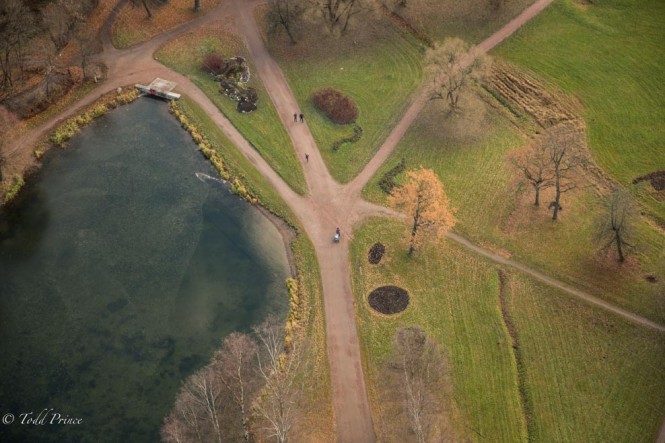 People, including one with a baby carriage, walking along a path in a park.

Two baby carriages moving toward each other along a path that seems quite narrow from the sky.

One can tell from the trees that we are in the late autumn period. 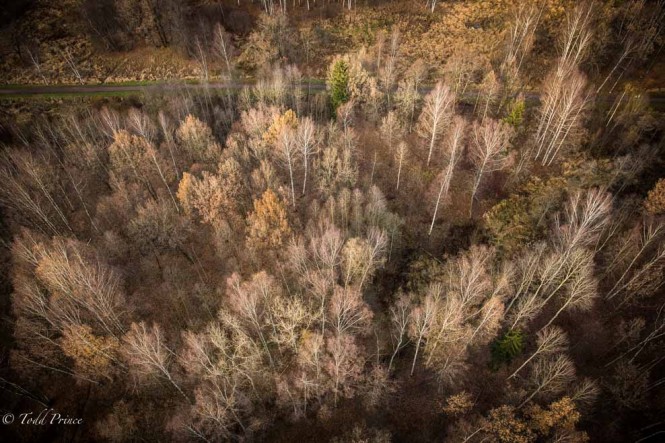 Another shot of the park that we flew over. 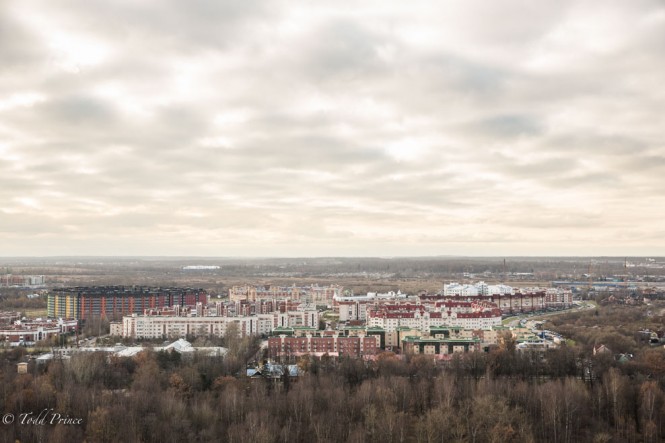 A passenger train rolling by underneath our hot air balloon. 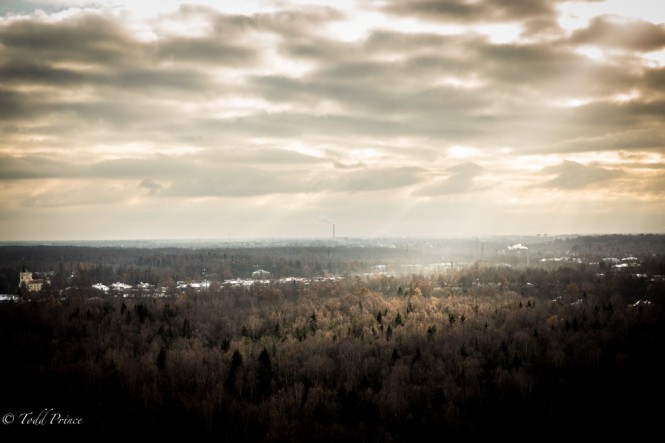 Some sunlight breaks through the clouds to light up some trees in a forest. 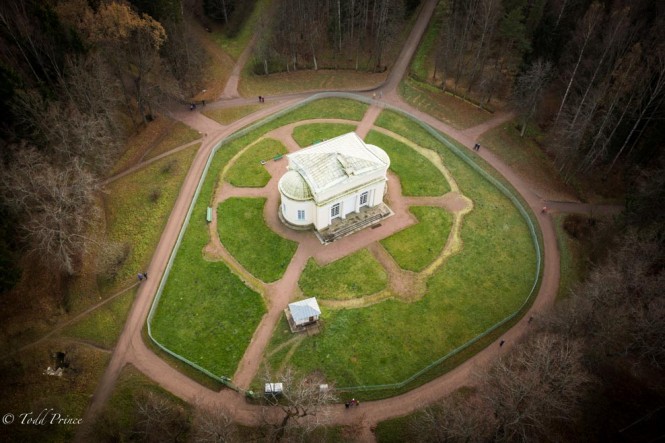 A photo of Pavlovsk Park. 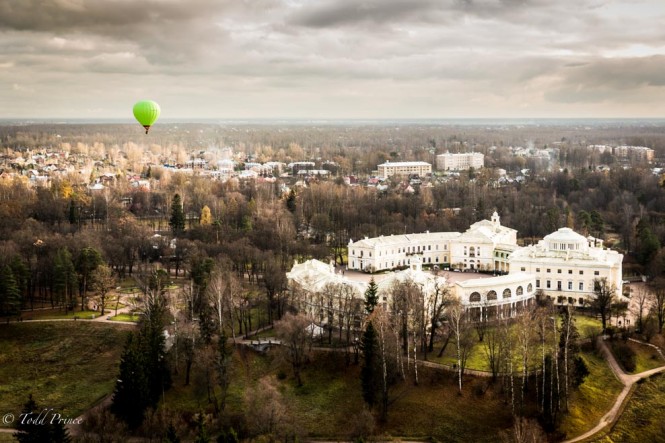 Another hot air balloon flying past the imperial residence known as Pavlovsk Palace. 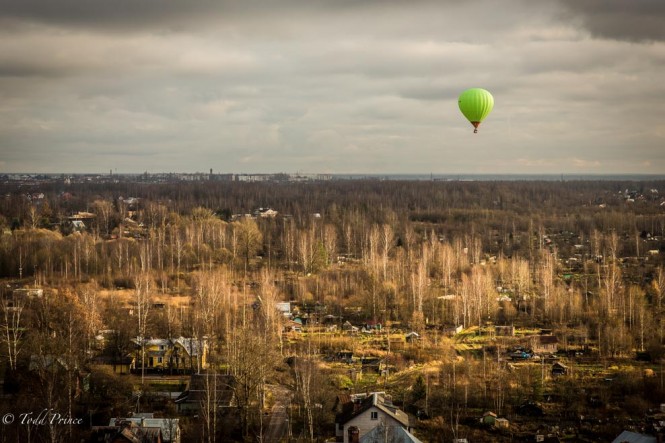 Again, a burst of sunlight breaks through, lighting up some summer dachas. 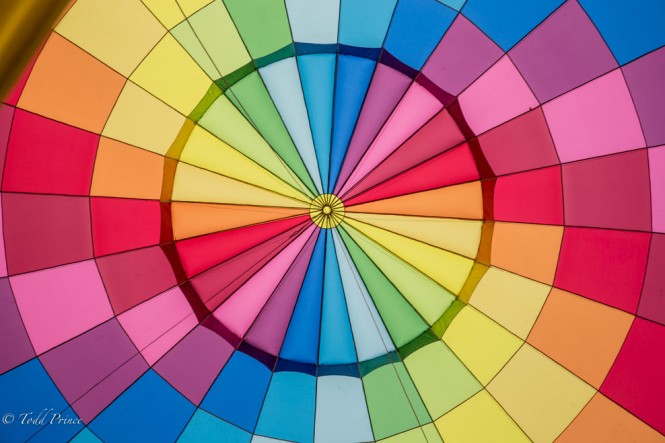 A photo taken looking up and into the hot air balloon prior to landing. 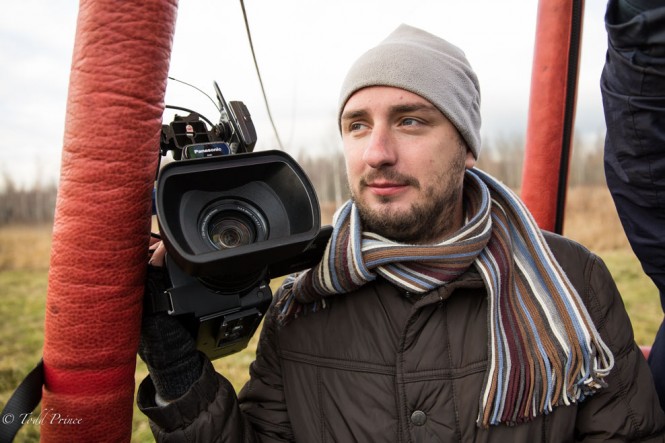 The TV station cameraman who joined us for the ride. 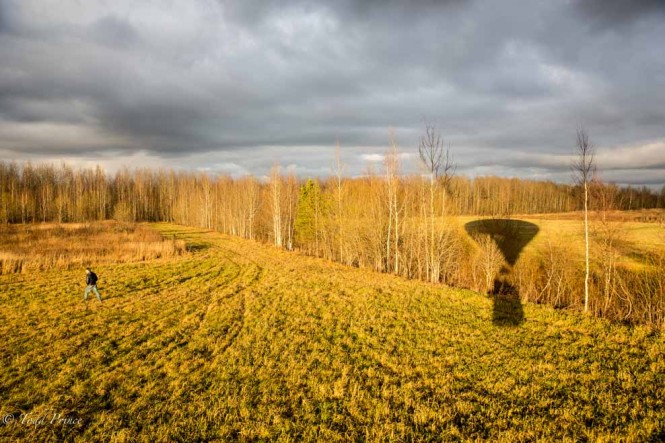 A man walking in the opposite direction of our hot air balloon, which casts a huge shadow on the ground. 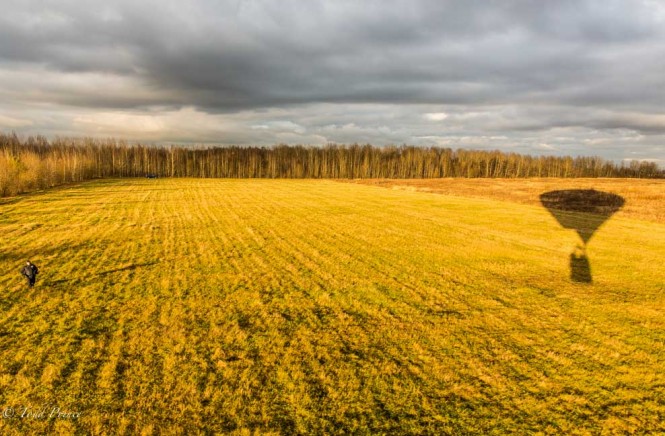 A member of the hot air balloon team running in order to help us land. 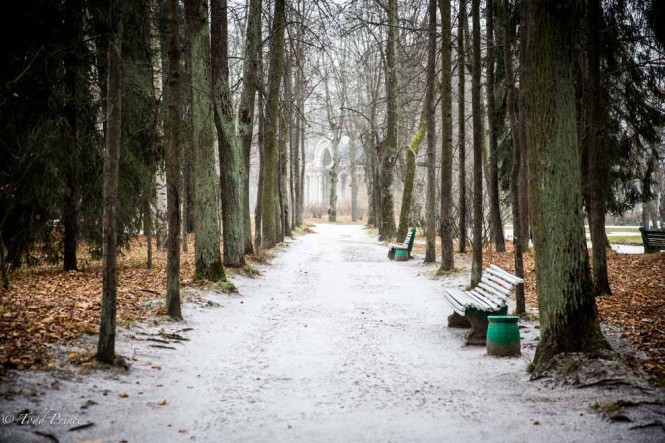 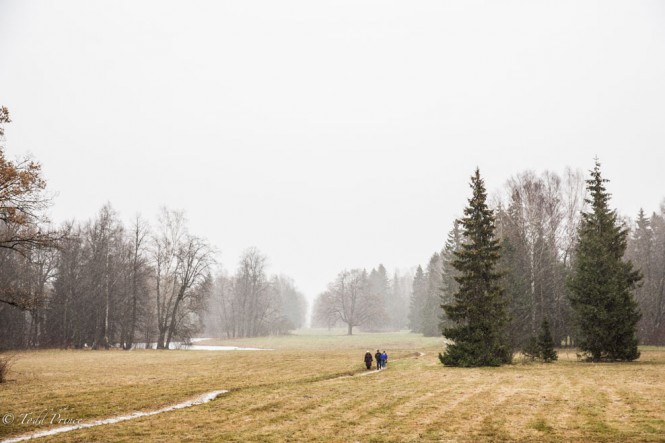 People walking toward the exit of Pavlovsk Park as the snow comes down. 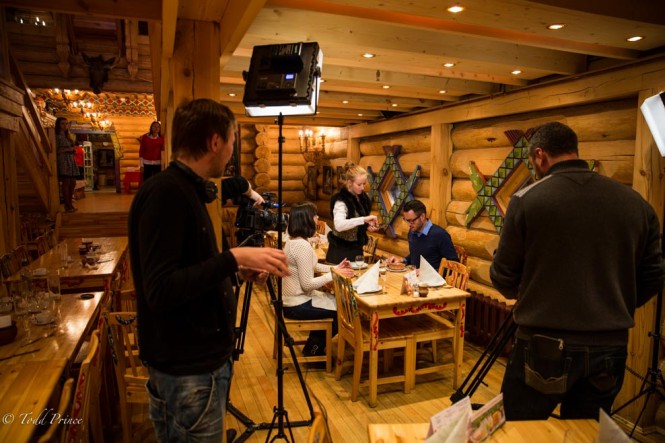 The cameramen getting the lighting set up as we prepare to eat the borscht we cooked on the TV program.