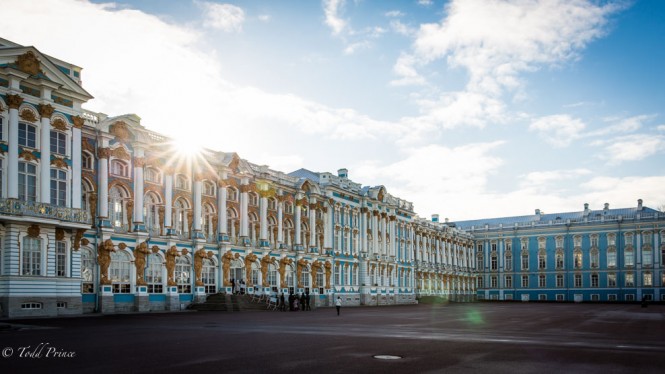 The sun rising over the Catherine Palace at Tsarskoe Selo outside St. Petersburg.

I was invited to take part in a Russian TV travel program titled ‘Там хорошо, где мы есть,’ which translates roughly as ”The Grass is Greener on Our Side.” The program focuses on travel mainly around Russia and is generally three days long.

The show host gave me the chance to visit the imperial family’s summer residences at Peterhof and Tsarskoe Selo, learn to cook borsh and take a ride on a hot air balloon over the St. Petersburg suburbs. This post will include photos from the imperial residences.

Not a Popular Autumn Destination

While St. Petersburg is not considered to be a good destination in the late Autumn due to the city’s cold and windy weather, the advantage of going offseason is the much smaller crowd.

Peterhof and Tsarskoe Selo are so packed in the summer time that one can spend a long time in lines, while getting ‘clean’ shots of the residences various buildings is near impossible.

We traveled to and from St. Petersburg by train in a group of six that included myself, my friend Masha, two cameramen, a soundman and a producer. We spent two nights at a B&B-styled lodging in the St. Petersburg outskirts.

We arrived in St. Petersburg on a Friday afternoon and went straight to Peterhof, getting there slightly before sunset. The clouds rolled in just as we arrived and were able to take a few photos before it became too dark. 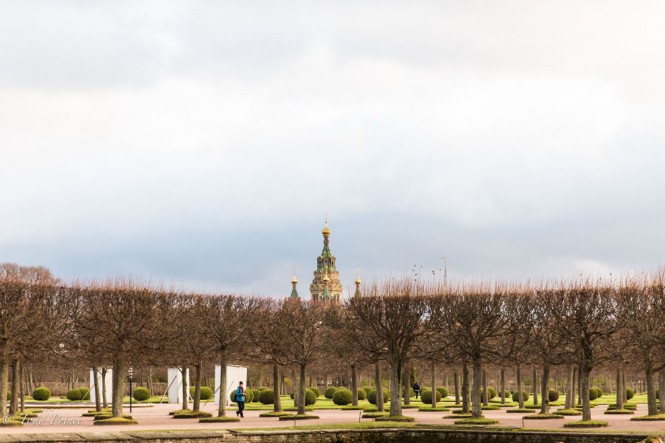 Dark clouds hang over the garden at Peterhof as a lone visitor wanders amid the leafless trees.

There were only a handful of people on this late Friday walking around Peterhof. There seemed to be as many workers as visitors…construction workers were busy fixing the palace facade while guards were strolling the laws and palace workers taking smoking breaks.

Fortunately, the clouds were thinner on Saturday for our visit of Tsarskoe Selo. We entered through the huge, heavy metal gate at the north end, getting an amazing view of the Rococco-styled blue and white Catherine palace before the local tour groups came.

The sun was still not high in the sky, resulting in a strong contrast between the shaded and sunlit areas of the palace. Despite the sunny weather, the crowds were still very thin at Tsarskoe Selo. We spent about two hours walking around the residence before heading to the 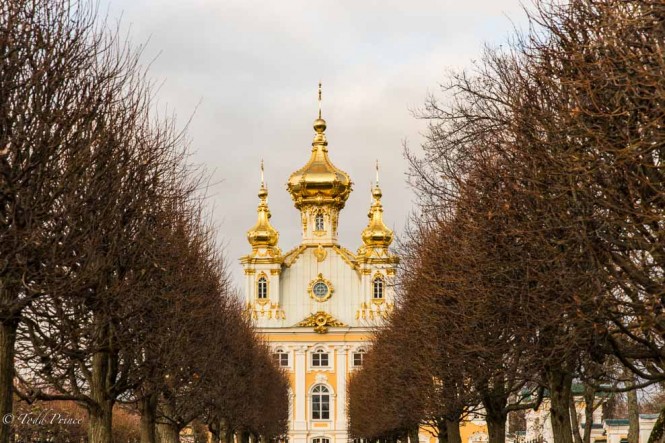 A church on the grounds of Peterhof. 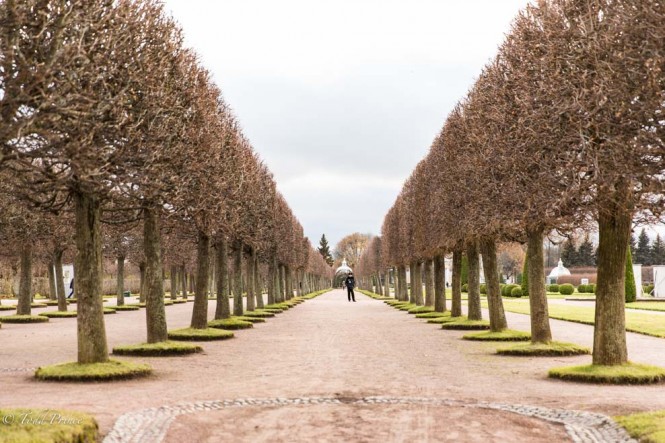 A guard watching over the empty garden at Peterhof on a cold, late Friday afternoon. 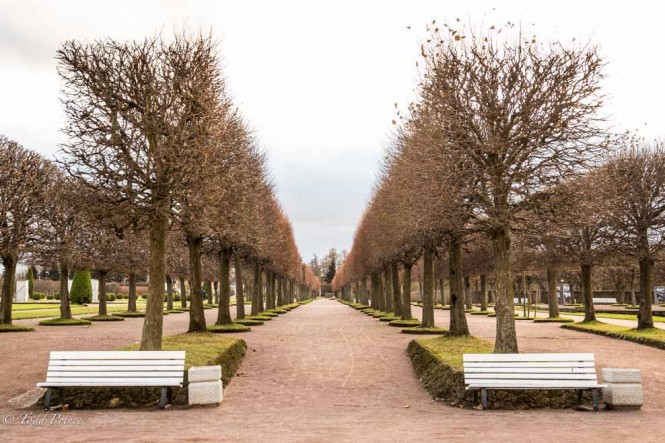 By November, there are barely any leaves on the trees in the Peterhof garden. 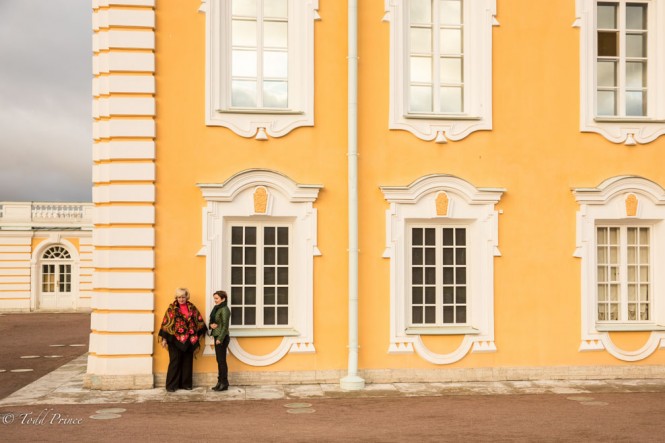 Workers at Peterhof taking a smoking break toward the end of the work day. 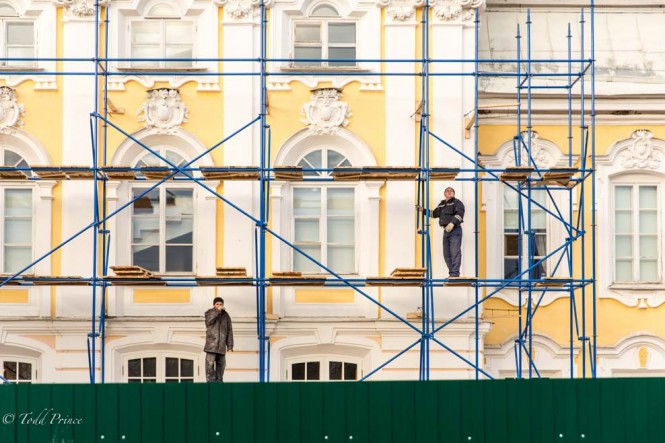 Workers carrying out maintenance on the palace facade at Peterhof. 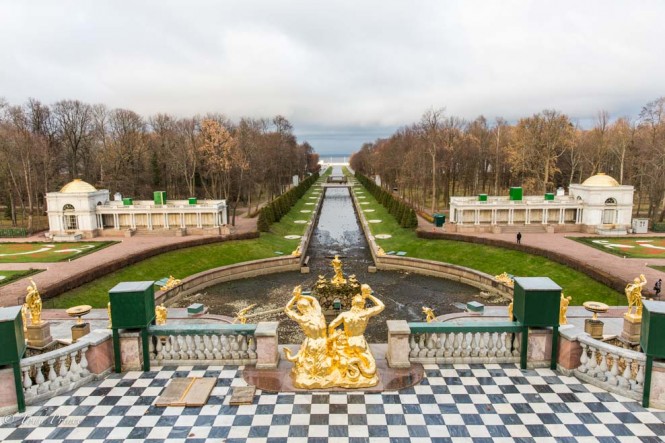 A view of the fountain at Peterhof. The fountain is turned off before November. 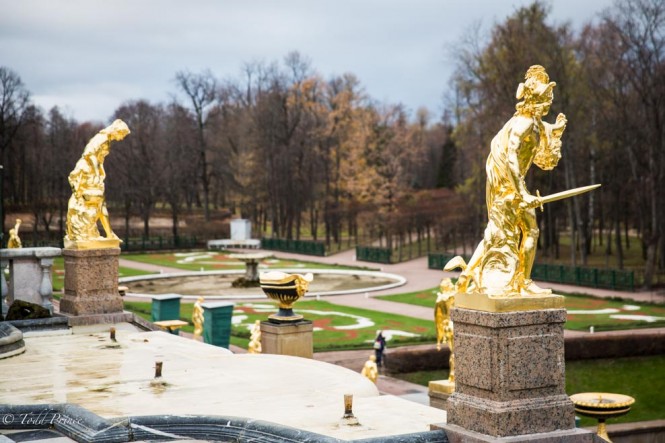 A close up of the statues that lead up to the palace at Peterhof. 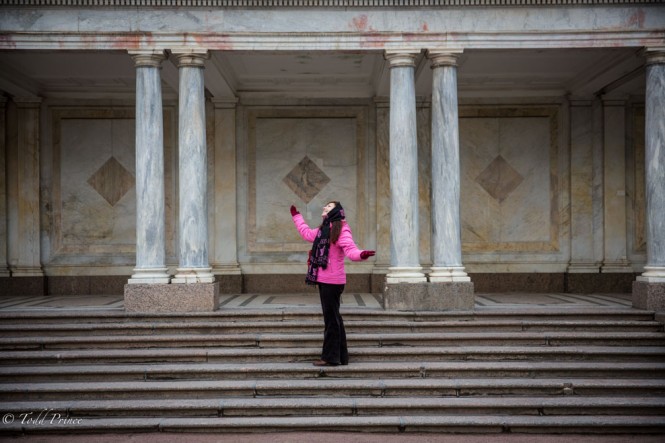 Maria was one of the few visitors at Peterhof on this cold, autumn day.

Maria said she grew up in St. Petersburg, but had Serbian roots. 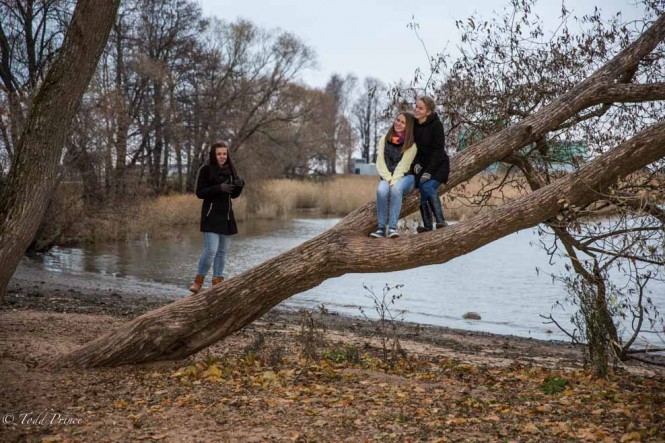 These three girls climbed onto a tree in front of the Peterhof palace as their friend took a picture. 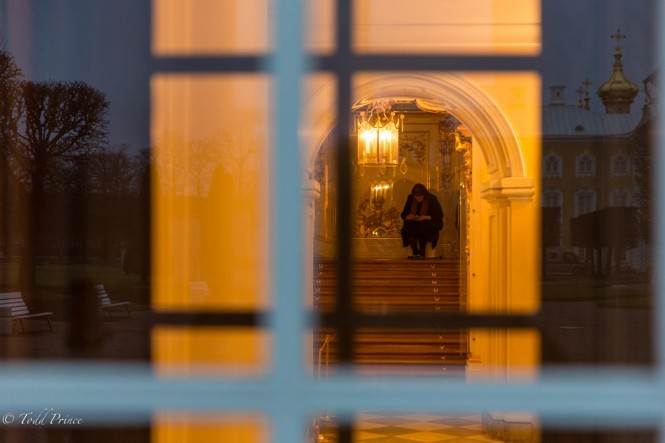 A Peterhof worker reading a book on a very slow Friday evening. 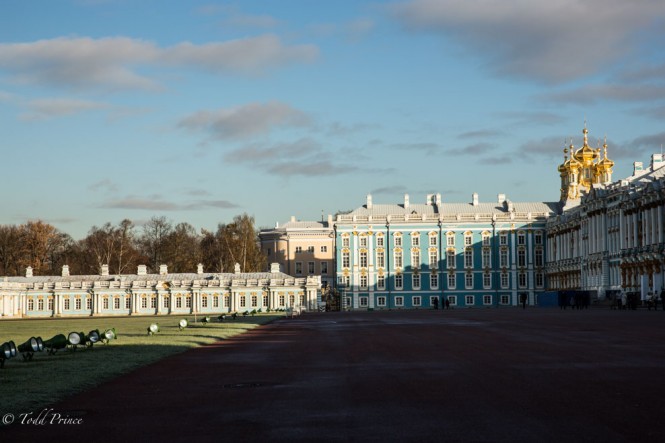 The sun was still low in the sky creating stark contrast on the Catherine Palace walls. 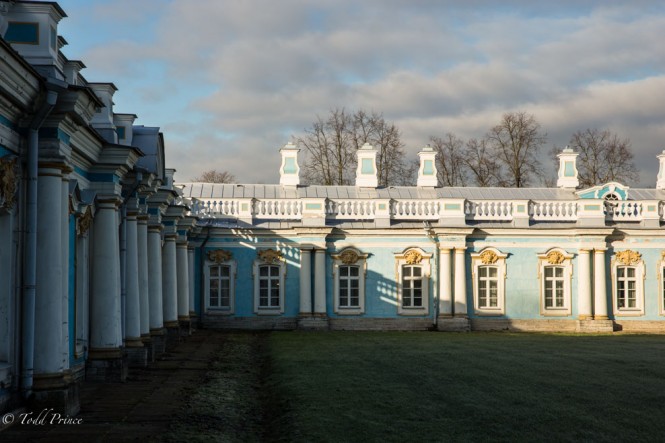 The north-side of the Catherine Palace on a sunny Saturday morning.

The sun is rising to the left of the picture, creating the hard shadows on this part of the Catherine palace. 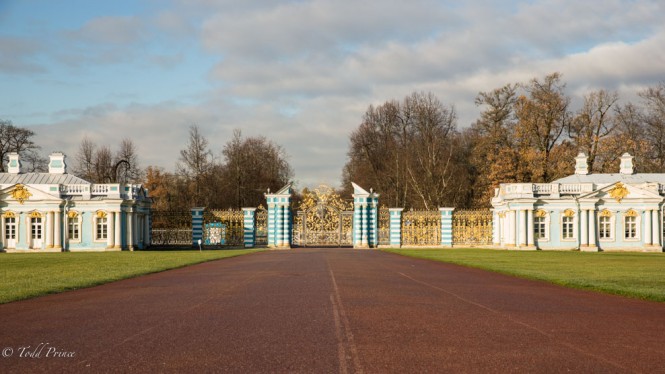 The heavy metal gates on the northern side of the Catherine Palace.

The sun rising over the Catherine Palace, creating sun flare. 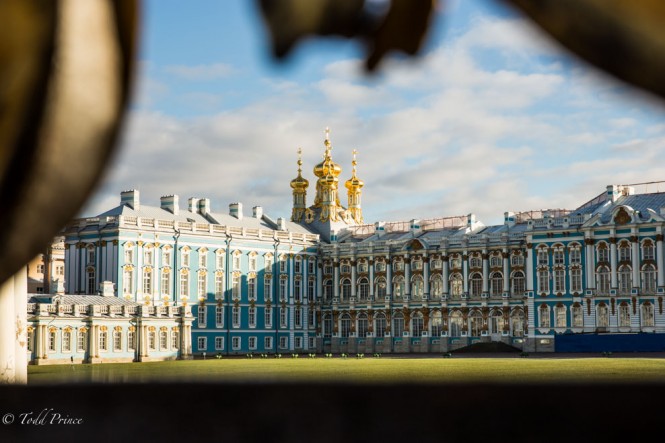 The palace and church as seen through the metal gates. 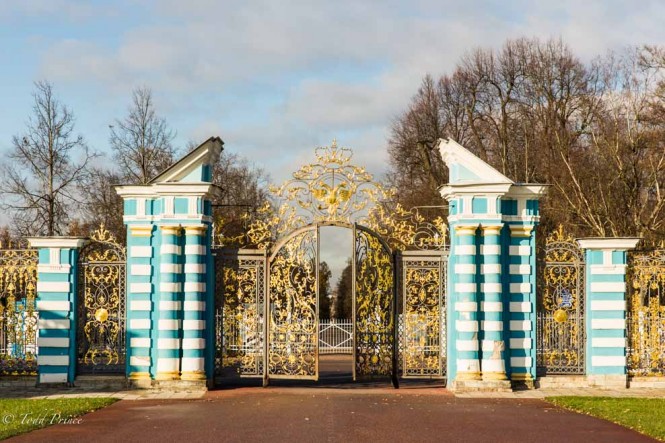 A close up of the gates. 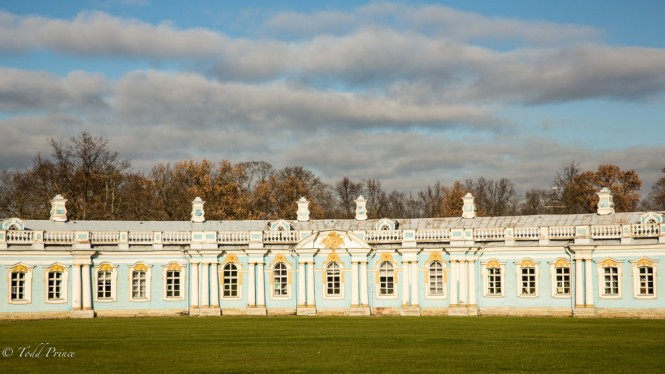 The symmetry at Tsarskoe Selo is eye-catching. 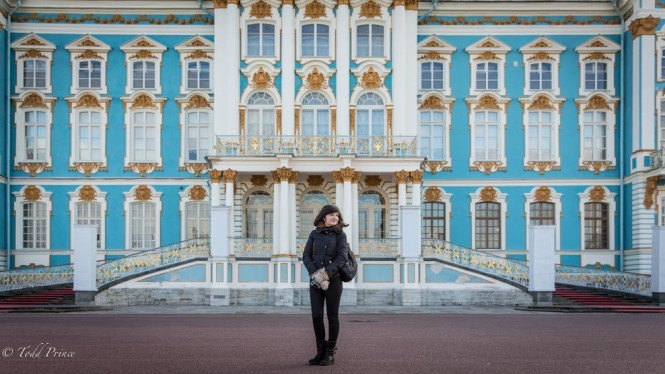 My travel partner, Maria, standing in front of the palace. 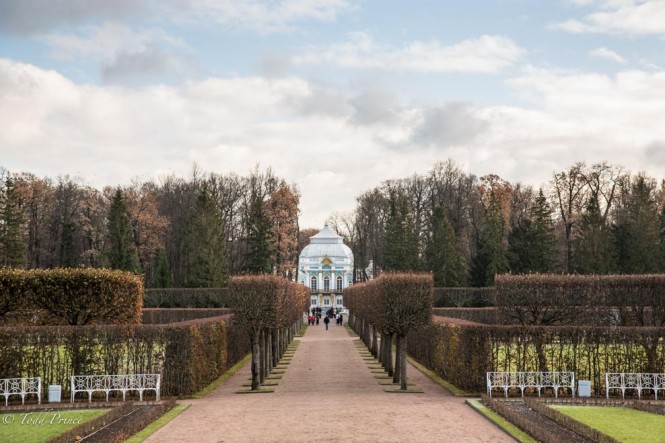 The crowds at Tsarskoe Selo were thin on this autumn day despite the sunny weather.

The enormity of Tsarskoe Selo can be seen in this photo.