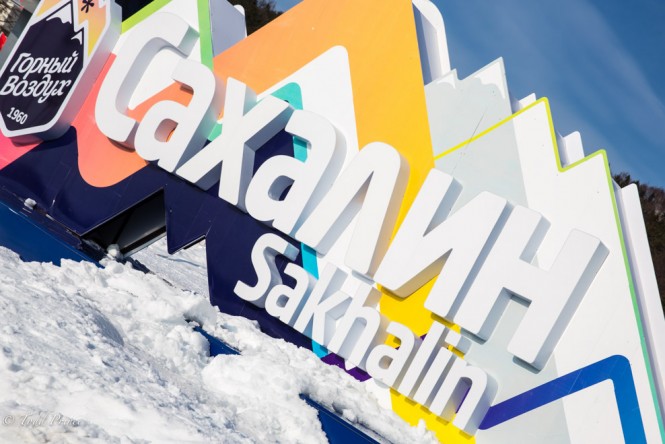 The Russian province of Sakhalin, an island north of Japan, has always been associated in my mind with oil and gas projects, earthquakes or nasty snow storms. Other than it once belonging to Japan, I didn’t know much about Sakhalin – its history or its people.

Here are eight things I learned from my five-day trip to the south of the Island this month.

1. Regardless of one’s profession, nearly everyone on Sakhalin fishes. I was told there are traffic jams on Saturday morning as people head outside Yuzhno-Sakhalinsk to fish.

Here are some of the quotes regarding fishing I heard from residents of Sakhalin.

”If I can’t fish, there is nothing for me to do.”  ”Fishing is a hobby for just about everyone.”

”If you don’t fish, you won’t survive as food here is expensive.”  ”Fishing is in our blood.” 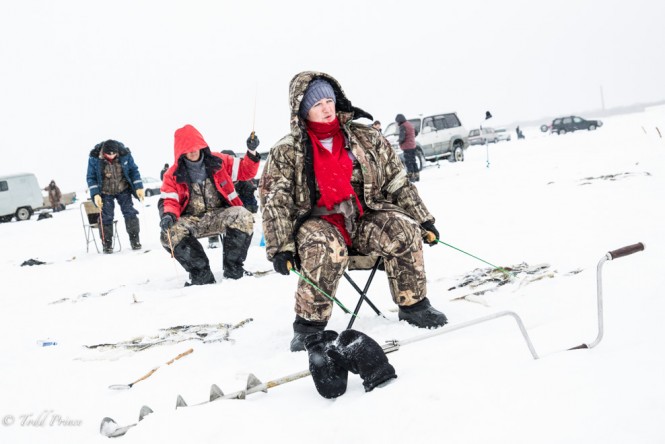 Fishing is not just for men on Sakhalin. 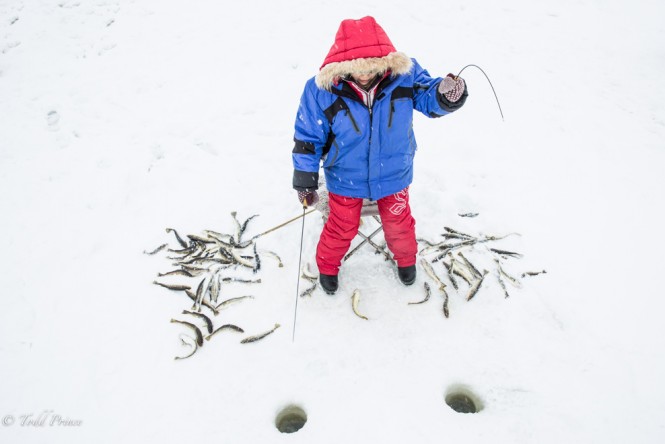 A Korean woman fishing in Poronaisk

People fishing on the outskirts of Poronaisk 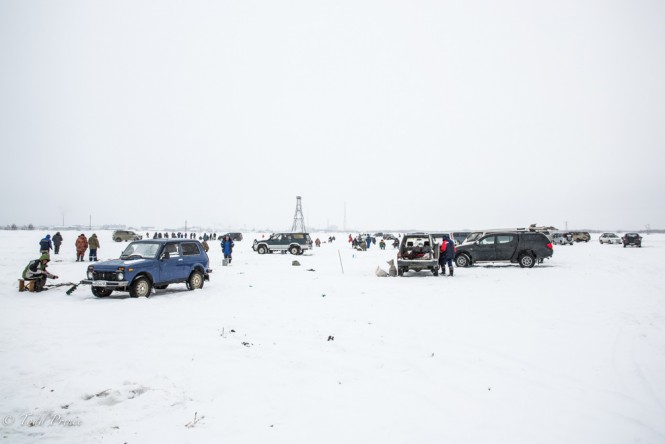 2. There are still quite a few Japanese homes and buildings around Sakhalin. There is one in the center of Yuzhno-Sakhalinsk as well as homes on the outskirts Poronaisk. There is also a Japanese-built pulp and paper factory that has been abandoned post the Soviet collapse.

A Japanese building in the center of Yuzhno-Sakhalinsk 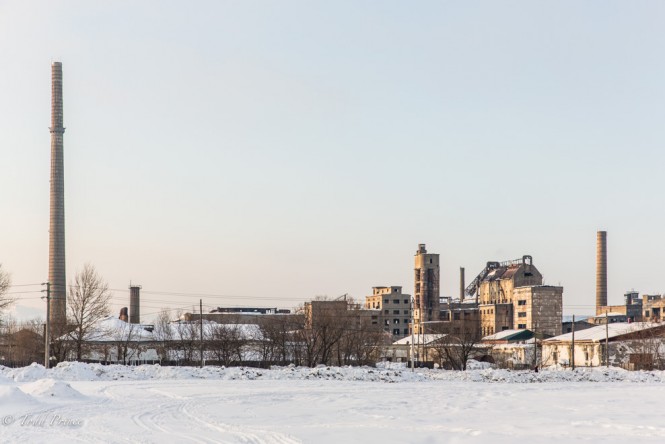 A Japanese-built pulp and paper factory

3. There are plenty of ethnic Koreans on the island, though most don’t speak much Korean at this point.

Some of them have moved to Korea over the years…as I understand, there was a program to resettle some of the Koreans back to their historic homeland.

However, as one Korean woman told me, many Koreans are ‘Russified’ and don’t want to go to Korea, including her and her daughter. 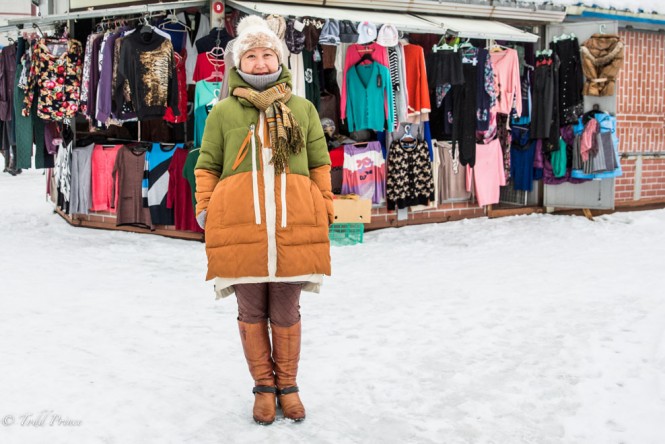 A Korean woman at the Yuzhno-Sakhalinsk market. 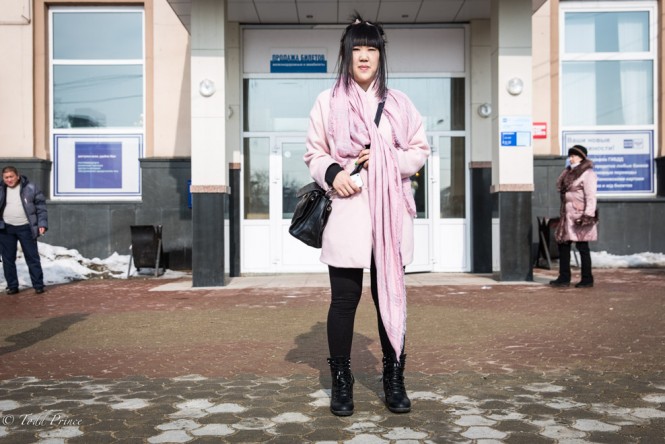 4. Sakhalin is refurbishing a lot of its grey Soviet-era homes, covering them either in colorful paint or colored insulated paneling. I saw rows of streets getting the upgrade.

As the quality of the Soviet-era homes is quite poor on Sakhalin, the upgrade makes a serious improvement to the towns’ look. 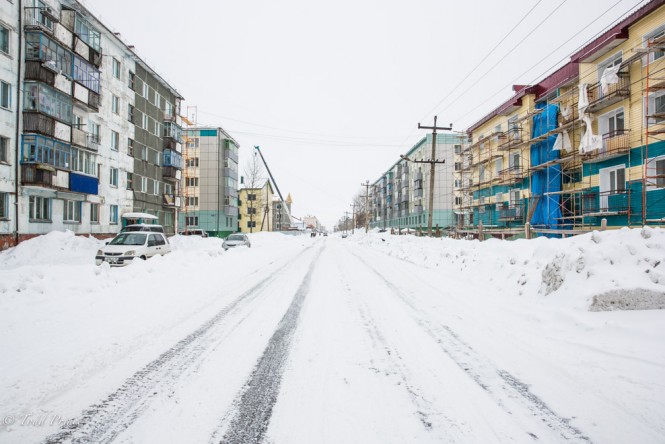 A row of Soviet-era homes getting new, colorful insulated facades. 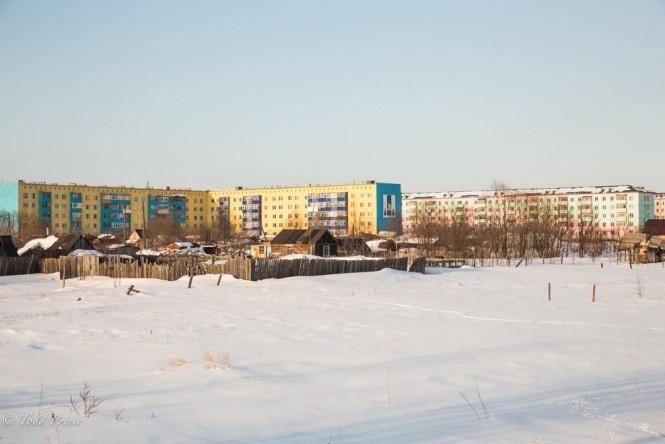 These once grey, Soviet-era buildings received a colorful paint job.

5. People on Sakhalin are friendlier than on the Russian mainland. I heard this from both local residents and Russians from the mainland. I came to the same conclusion as well based on random street photos.

People – especially adults – had no problem having their photo taken, something that is more difficult on the mainland.

As one Sakhalin resident explained, the earthquakes and storms mean that people on Sakhalin need each other more and that this may explain why locals are so open and friendly. 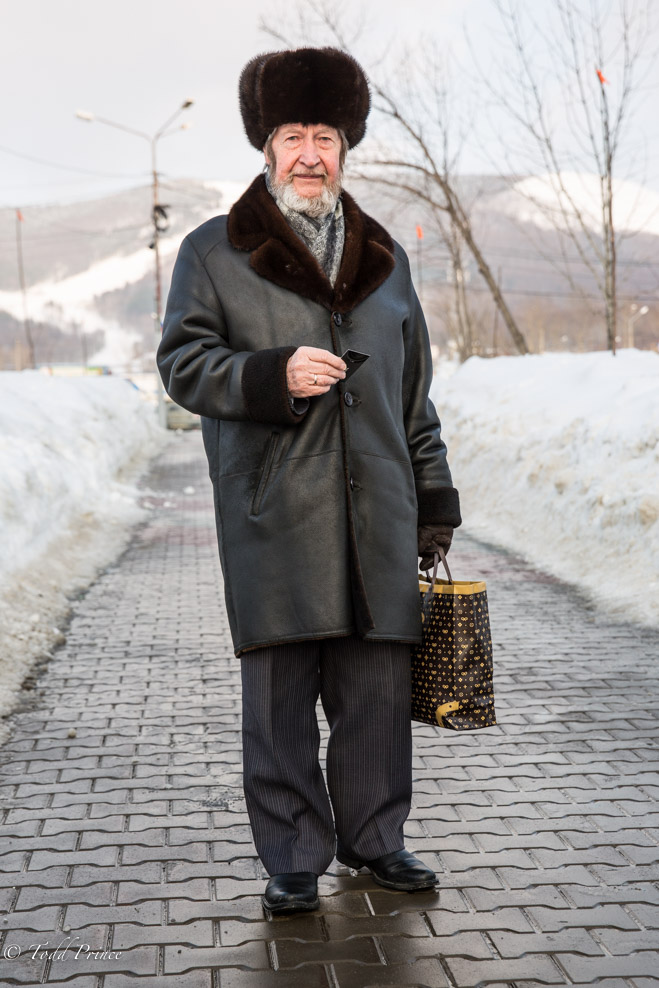 A doctor on Sakhalin 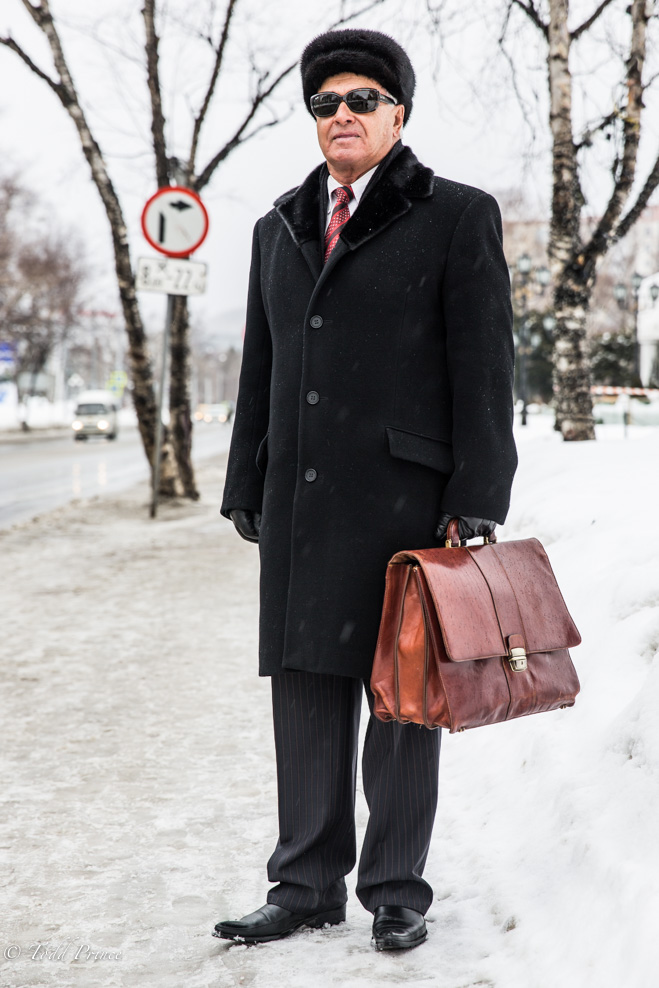 A career oilman on Sakhalin.

6.  There is a high percentage of children on Sakhalin – or so it seems. If you go to the local park, you will see dozens of parents walking their children in carriages. Many people had two or three children.

As I found out, the Sakhalin government gives money to families with two or more children…on TOP of the money they receive from the federal government for a second child.

A family receives about 2 million rubles for housing needs upon having a third child, I was told. 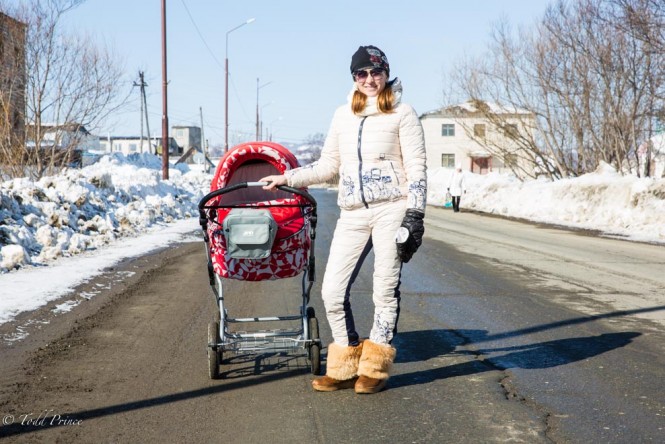 Alexandra has two children and would like a third.

Parents and grandparents walking children in the park. 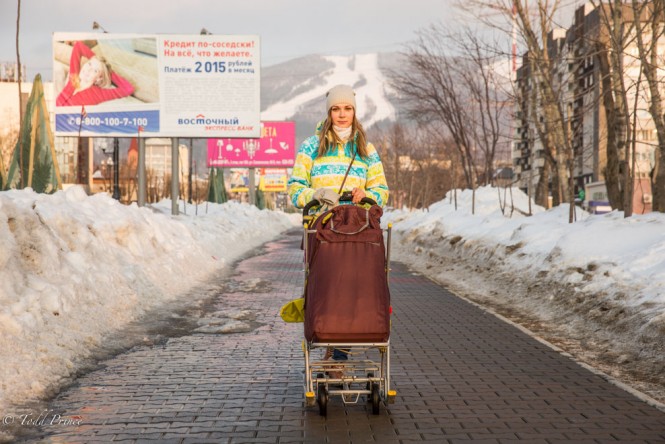 A mother walking with her baby in the center of Yuzhno-Sakhalinsk.

Those that want to leave – mainly young people – site the lack of a diversified job base. Those that want to study and work outside of oil, gas, fishery or services industries find Sakhalin too narrow for their aspirations. 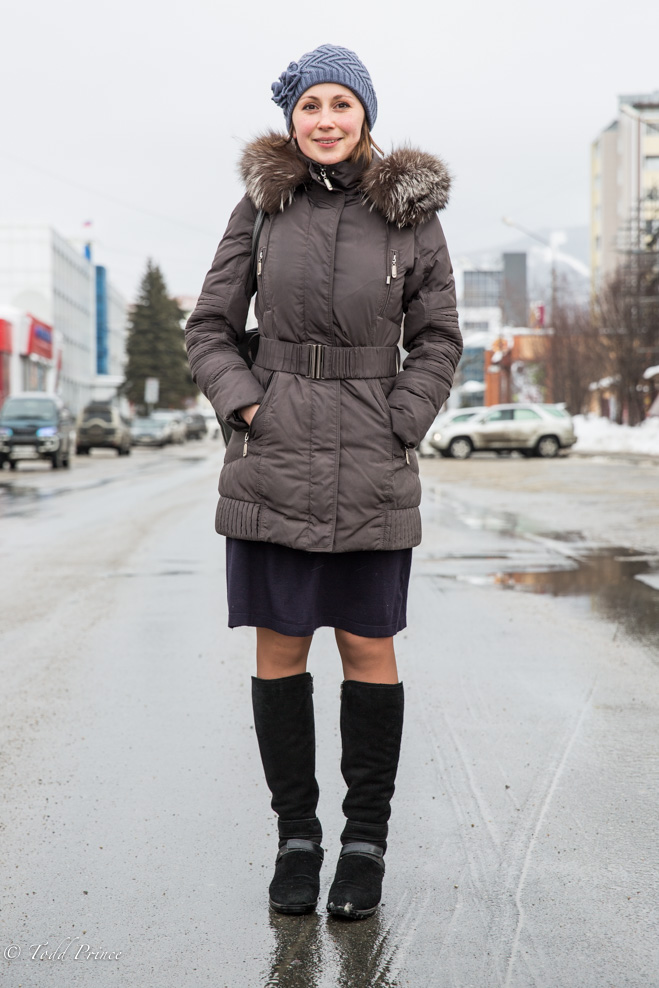 Masha was among the half that enjoy Sakhalin and intend to stay. 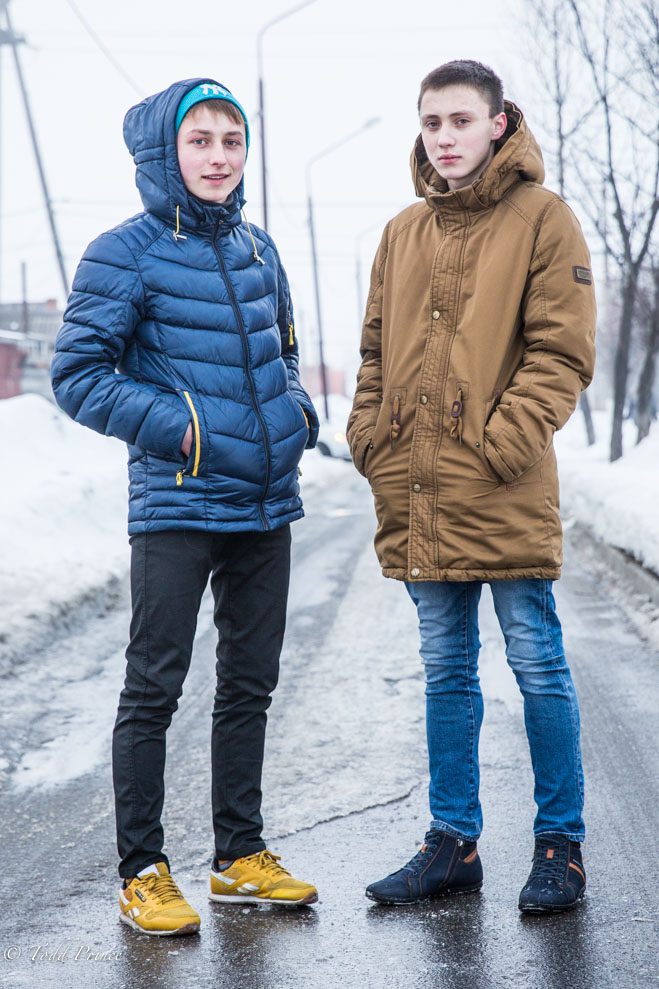 Stanislav (left) is among the young that want to leave to pursue other opportunities.

8. Sakhalin has the coolest winter motorcycles in the world.

Two Russians riding on a motorcycle on Sakhalin