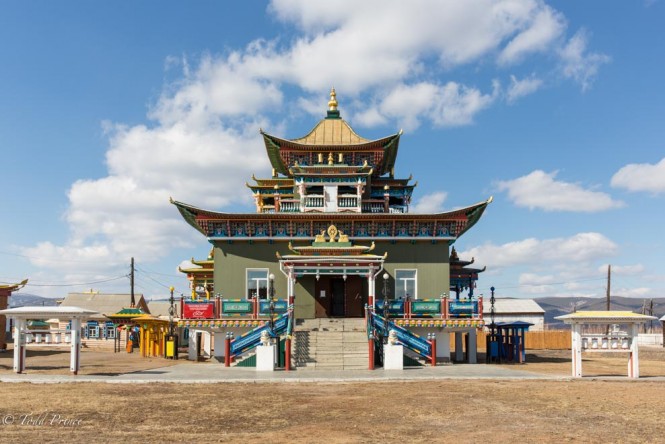 One of Ivolginsky’s seven temples.

Despite more than a decade living in Russia and reading about its culture, I had never heard of the Buddhist spiritual center Ivolginsky Datsan until I arrived in Eastern Siberia.

The ”Lhasa” of Russia, Ivolginsky is home to the nation’s top Buddhist lama while its university is officially recognized by the Russian government, the only such Buddhist institute in the country.

The term ‘Datsan’ comes from the Tiben words for ‘gathering of monks’ and is used to refer to Buddhist monasteries. 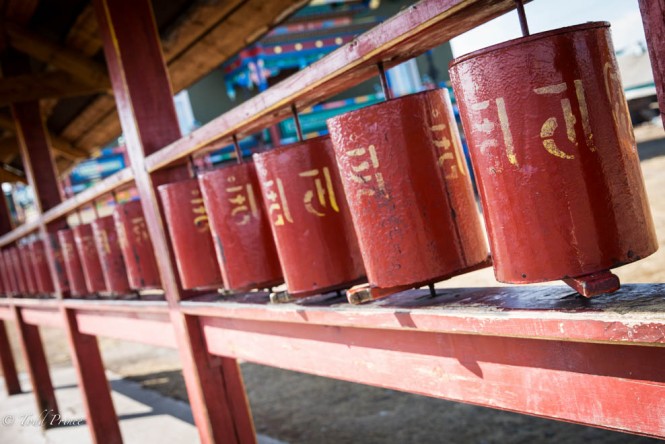 The pray wheels at Ivolginsky.

During Czarist times, there were nearly 50 datsans in eastern Siberia near Mongolia to serve the Buddhist Buryat people, ethnic relatives of the Mongols.

Under Stalin’s rule, the datsans – like many other religious places of worship in Russia – were closed down and its lamas persecuted and sent into exile.

However, in December 1945, Stalin permitted the opening of the Ivolginsky Datsan as part of a general thawing toward religious believers in the USSR.

In 1991, Ivolginsky added the university. Since the fall of communism, other datsans have opened around Buryatia and other parts of Russia, serving – according to articles – the nation’s 700,000 Buddhists. 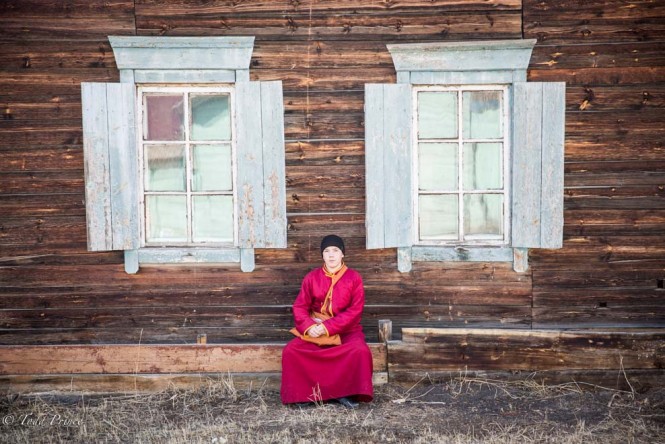 Ochar, a Buddhist student, sitting in front of his dormitory.

The Ivolginsky Datsan is 30 kilometers from Ulan-Ude, the capital of Buryatia.

The Ivolginsky Datsan complex consists of seven temples, the Lama’s residence, student residences, a library, museum and a hotel. There are also souvenir shops inside the datsan complex.

Construction is visible on the premises, giving the impression that Ivolginsky Datsan is expanding. A look at photos from 13 years ago – when there were four temples – confirms that.

The most beautiful – and perhaps most important structure – is the Etigel Khambin Temple, whose colorful red doors and decorative roof immediately catch the eye. 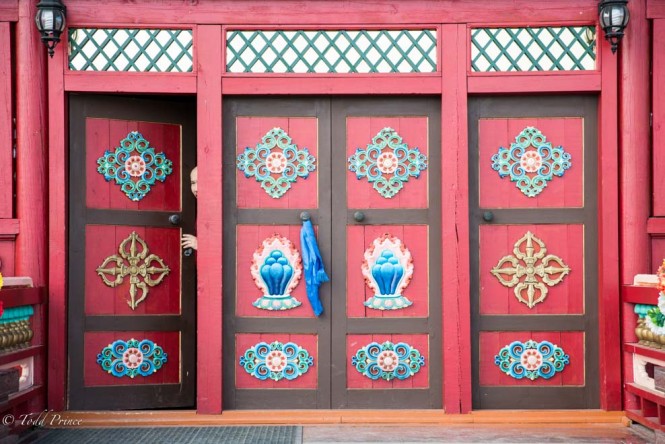 The temple houses the well-perservd remains of the 12th Pandito Hambo Lama, who died in 1927.  Exactly how his body remained preserved for decades is a debated question, that some believe is a miracle.

According to one of the students I met, about 150 people are currently studying at Ivolginsky Datsan. They can chose from four faculties, including philosophy, medicine, art and tantra.

The Datsan university program is rather long – eight years. Students can enter the Buddhist university after completing 9th grade, so as early as 15 years old. 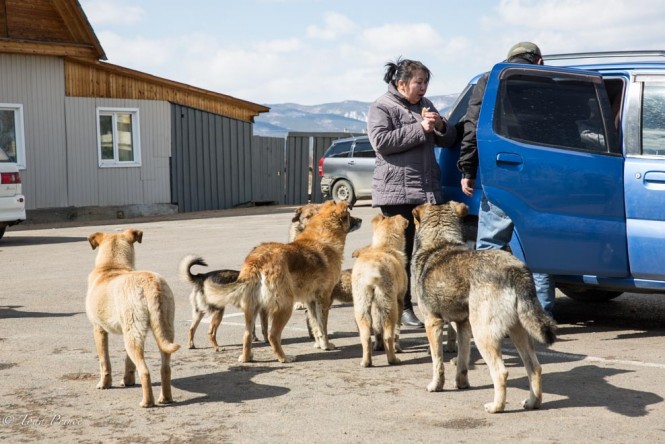 Mongolian tourists looking for food to feed the dogs standing outside the Datsan.

Upon arriving at Ivolginsky Datsan’s gates, I was greeted by a dozen or so local dogs looking for some food. They quickly left me for the Mongolian tourists that were ready with food.

Russia has recent relaxed the visa regime with Mongolia and the number of tourists from that steppe country to Ulan-Ude and the Datsan has increased noticeably, according to local residents.

Both outside and immediately inside the datsan, local residents sell souvenirs, including gold-colored statues of the Buddha. 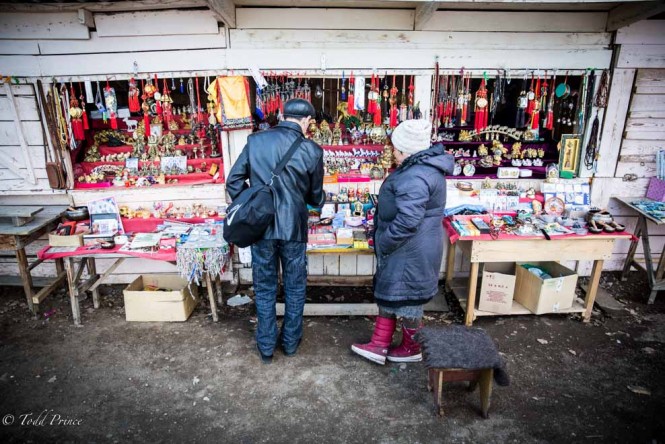 A souvenir stand inside the Datsan.

There is a an old cafe across the parking lot from the Datsan for those looking for a bite to eat after visiting the premises.

Outside the Datsan’s gates, hundreds – if not thousands – of prayer ‘flags’ are tied to bushes. The picturesque Buryatia landscape is visible from that spot. 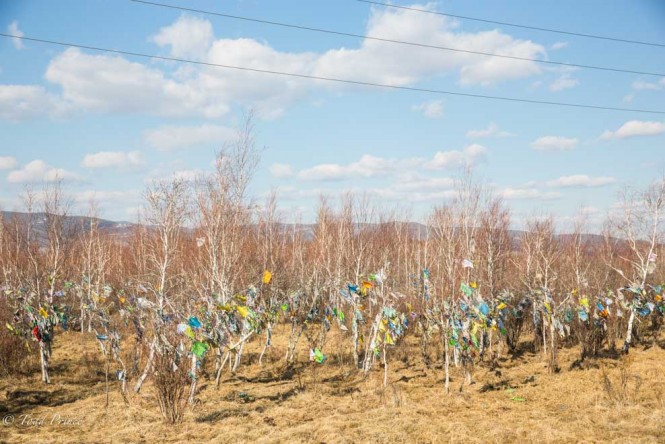 A red and yellow wooden gate guards the main entrance to the Datsan, whose buildings and temples give an impression of modesty compared to Buddhist temples in Asia and the new temple in Kalmykia, Russia.

The student residences are made of wood and generally painted completely in one color, such as blue, green or brown. Wood for heating purposes is stacked up outside the residences. 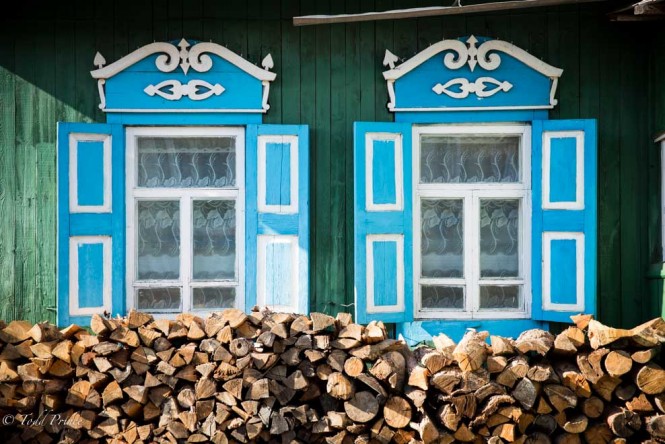 Wood for the winter stacked up to the window.

As I walked the grounds, students were busy carrying out tasks, such as carrying wood or water, while Mongolians tourists photographed themselves by the wishing stone and temples.

On this day sunny April day, most of the tourists were from Mongolia. However, I was told that many German and English tourists come during the summer time, including the German bus tours.

Nearly all the students I met at the Datsan were ethnic Buryats, though one – Ochar – was half Russian. He said he chose to study at the university over his parents’ wishes.

Students came not only from Buryatia, but the surrounding regions of Zabaikal and Tuva. For the full Datsan photo gallery, please click here. 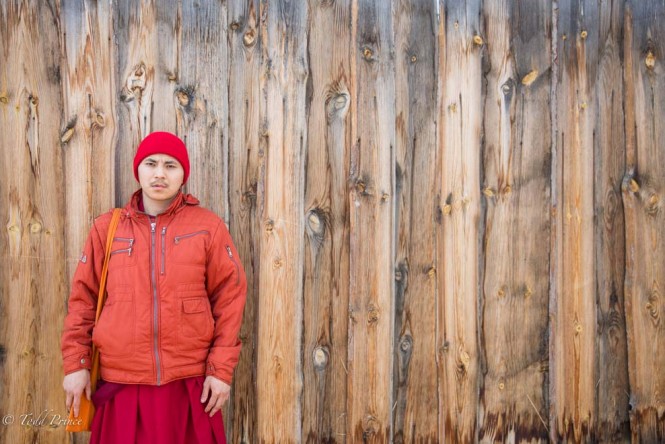 A Buddhist student from Tuva.