Holiday Lights and Decorations  in Moscow 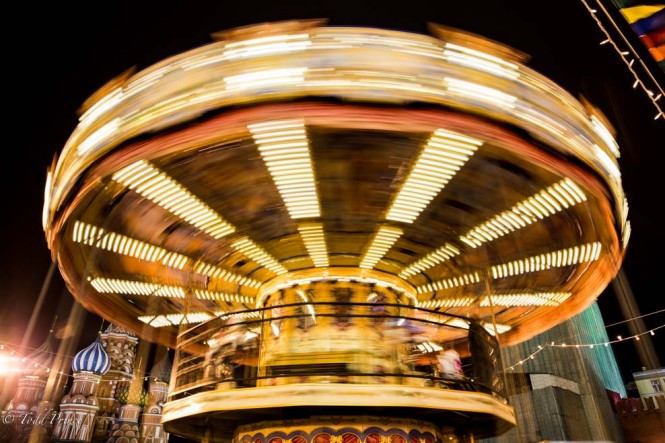 A carousel spins on Red Square before St. Basil’s Church.

Over the past few years, Moscow has done a pretty good job at decorating the city for the New Year and Orthodox Christmas celebrations.

Lights brighten up the city center around the Kremlin and other areas popular among Muscovites. Additionally, the city turns pedestrian streets into street markets where you can buy handcrafts, souvenirs and food. Together, it all creates an overall festive atmosphere around town.

This year, there seem to be even more street lights, more kiosks at the markets as well as simply more christmas markets. The key spot is around Red Square, where there are several street markets, light installations, skating rink and amusement rides for children.

Forget the Economic Headaches…for an Hour

A sense of movement created by moving the lens while taking the long-exposure photo.

There are also plenty of cafes around this area that you can pop in to for a hot drink and food as well as to simply warm up.

For those seeking more active winter recreation, there are the dozen or so skating rinks around the city, including one at Red Square, Park Gorkovo and VDNKh Park. Please see the link to VDNKh skating rink photos here.

Walking around the markets, checking out the handcrafts and having a hot chocolate or glint wine is a good way to temporarily forget about the falling ruble and economic headaches and pains that is causing the city and its residents. 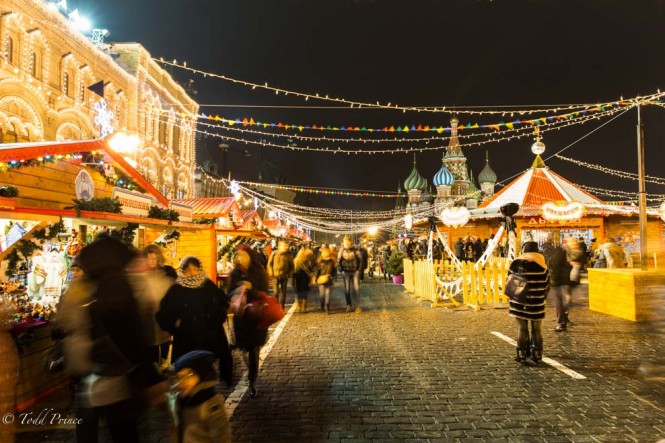 December has been relatively warm , so almost no visible snow at the Red Square Christmas market.

People walking among the kiosks on Red Square as St. Basil’s church stands in the background. 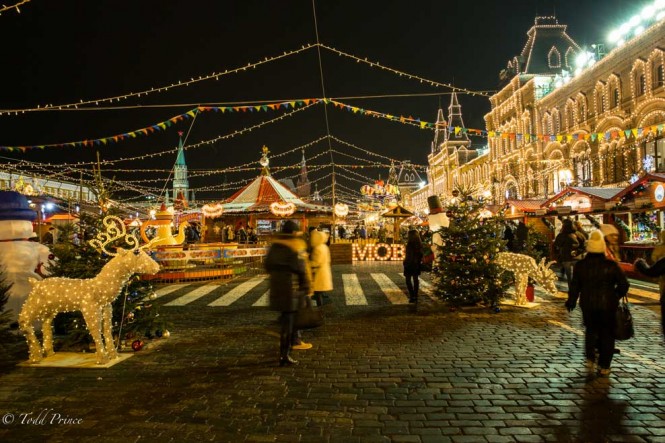 A broad view of the kiosks on Red Square. GUM department store on the right. 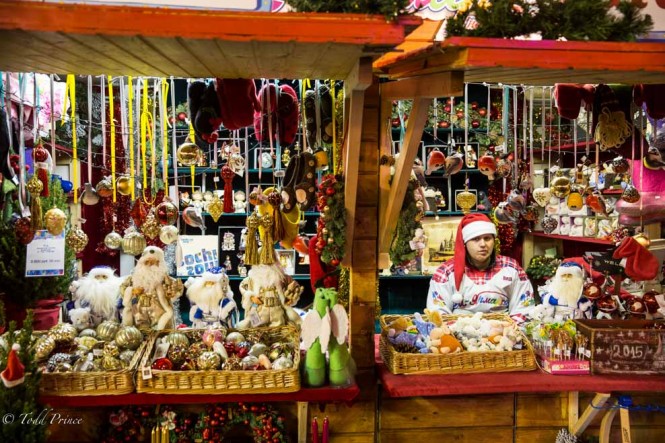 A worker sitting inside one of the dozen or so kiosks on Red Square selling various souvenirs and handcrafts. 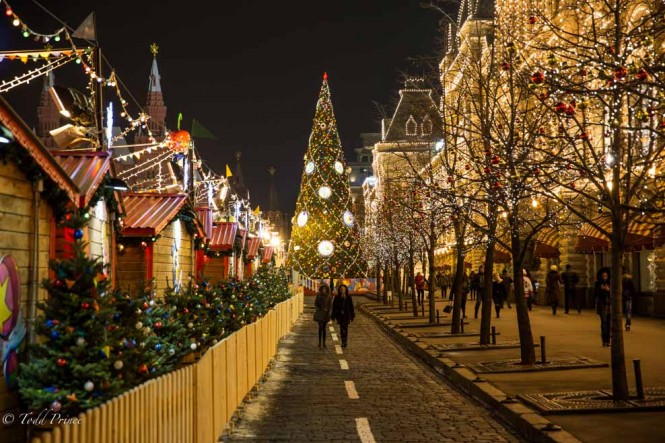 A huge Christmas tree stands in the distance on Red Square. 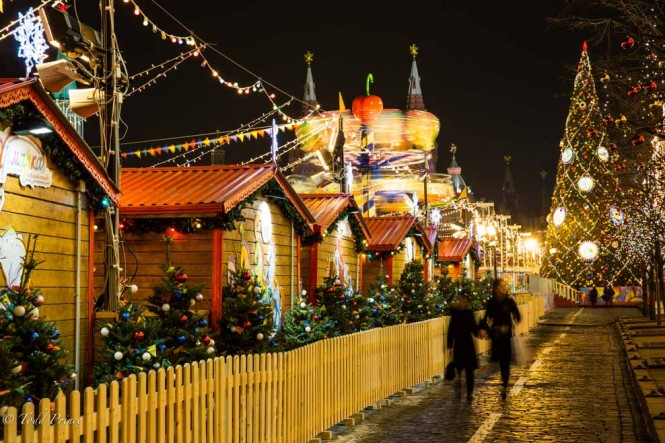 A children’s amusement ride at the Christmas market on Red Square spins in the background. 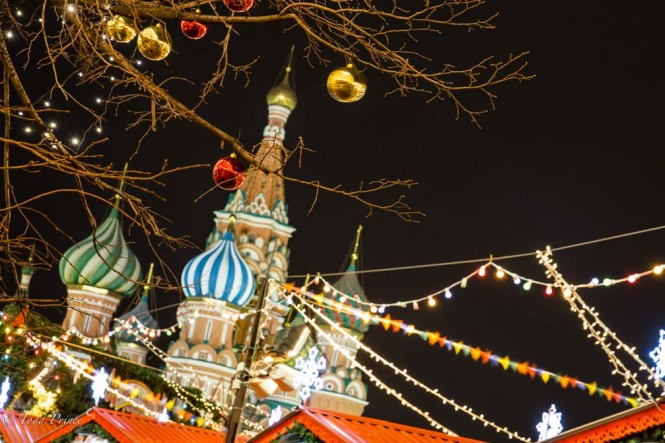 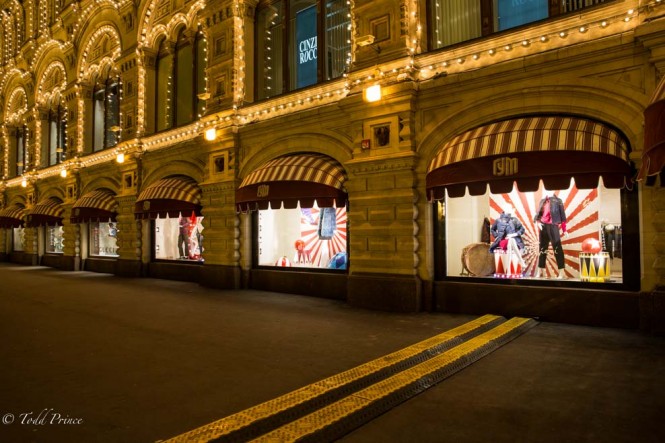 A view of GUM shopping mall windows at night. 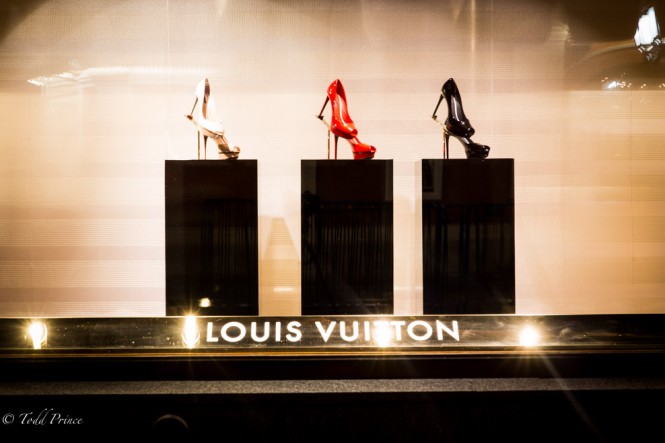 Louis Vuitton shoes in the window of GUM shopping center on Red Square. 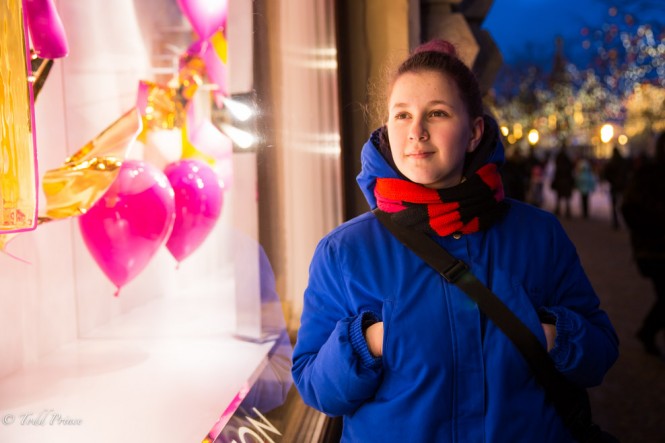 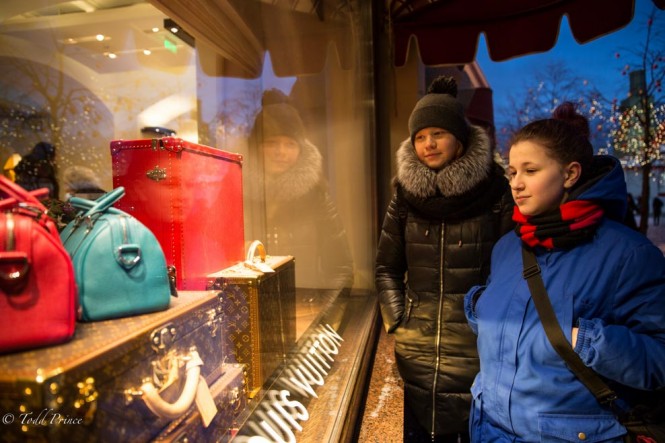 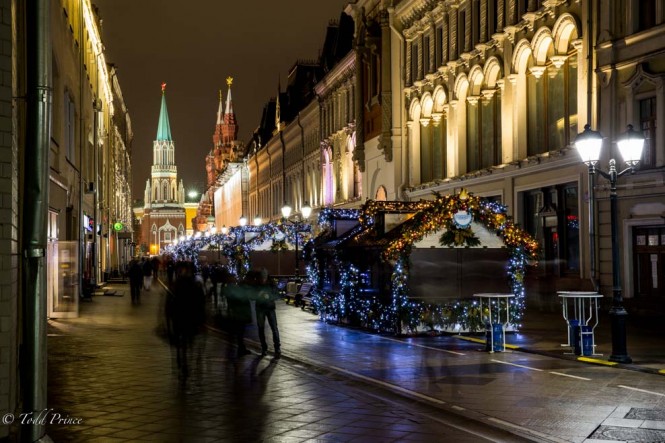 A Christmas market lines this pedestrian street near Red Square. 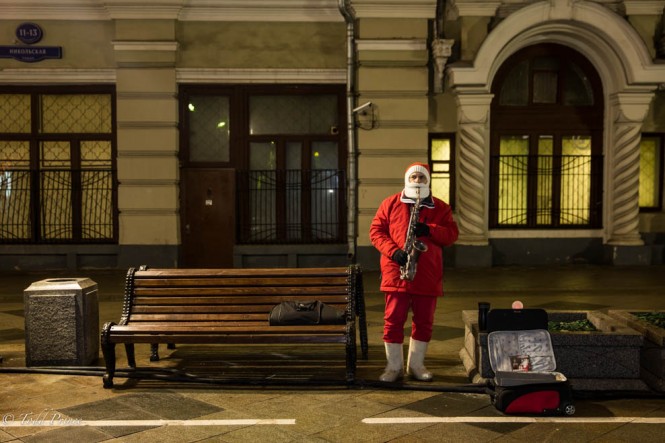 Santa was playing Sinatra in addition to Christmas carols on a side street near the Kremlin. 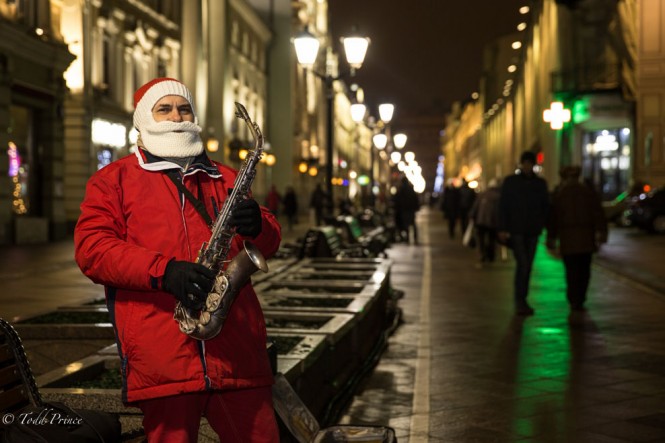 This musician said the pedestrians have been great, but the police have been difficult. 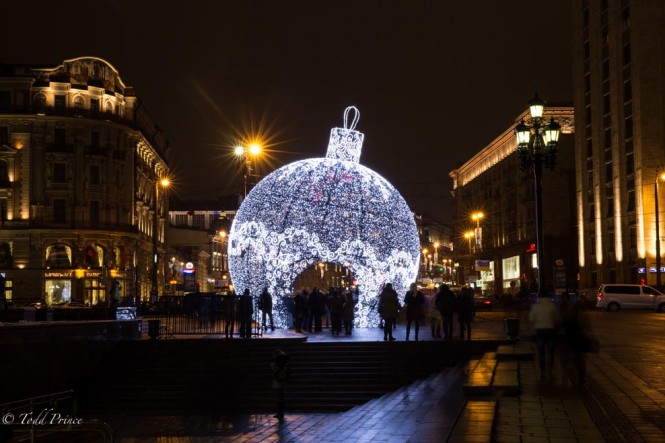 People walking into the Christmas decoration made of lights. The Kremlin wall can be seen in the background. 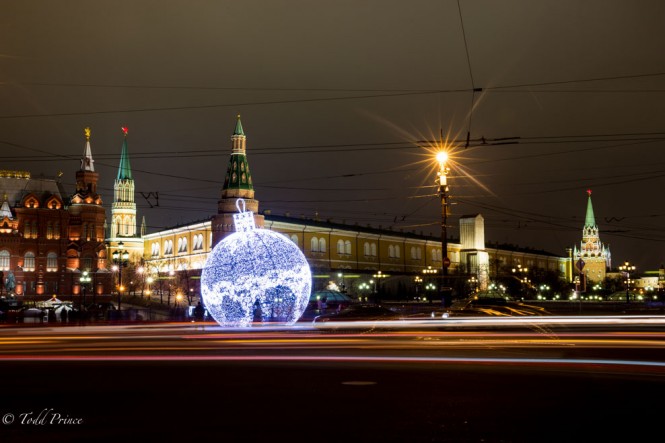 A huge Christmas decoration made of lights was placed on Manezh square in front of Red Square. 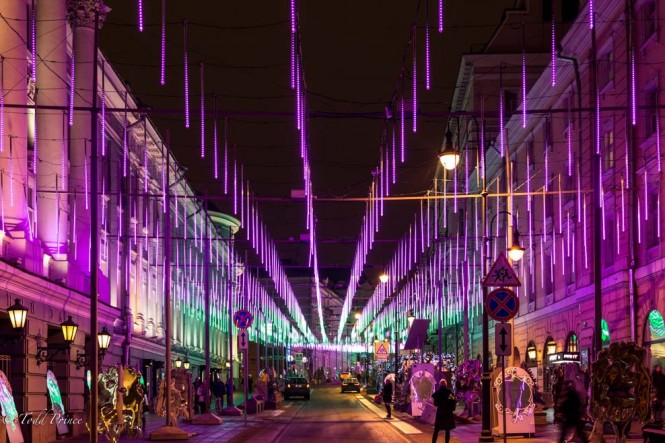 Looking up Bolshaya Dmitrovka away from Red Square. The street has bee decorated in more light this year. 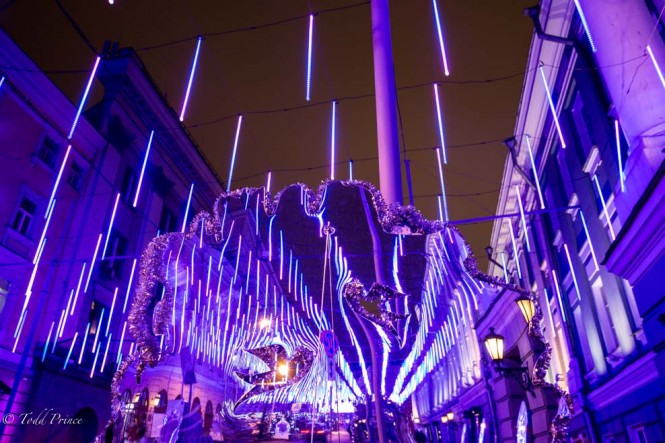 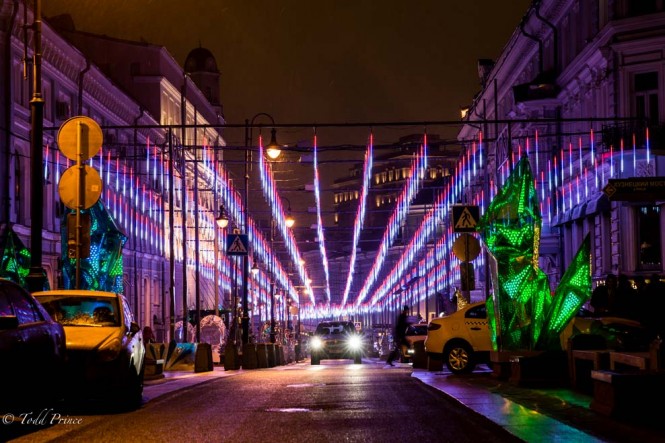 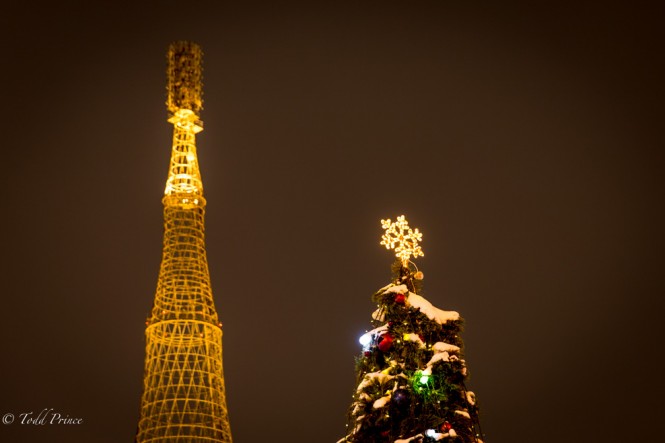 The Soviet-era Shukov radio tower literally ‘towers’ over this Christmas tree near the center of Moscow.