A view of Makhachkala from the hills.

Russia’s north Caucasus province of Dagestan is considered to be an economically depressed region.

In fact, Russian state new agency RIA Novosti’s research division named it the country’s poorest region for 2013. Here is a link to that report in Russian:

The average family in Dagestan had 7,200 rubles left over per month in 2013 after subtracting minimal living costs, according to the research.

Thus, I expected to find an economically challenged place when I arrived in Dagestan’s capital of Makhachkala in April. 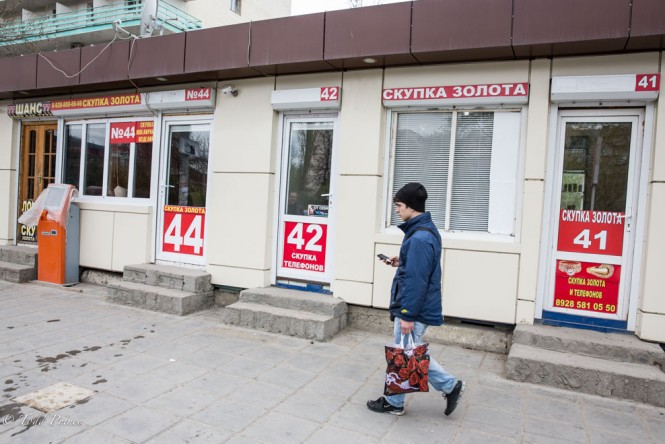 I did come across an entire street lined with pawn shops, where people could hand in mobile phones and other electronics for cash. The number of pawn shops in the city center may have exceeded 100.

That looked like a clear sign that times are hard in the region and underscored the RIA’s economic rating….but… 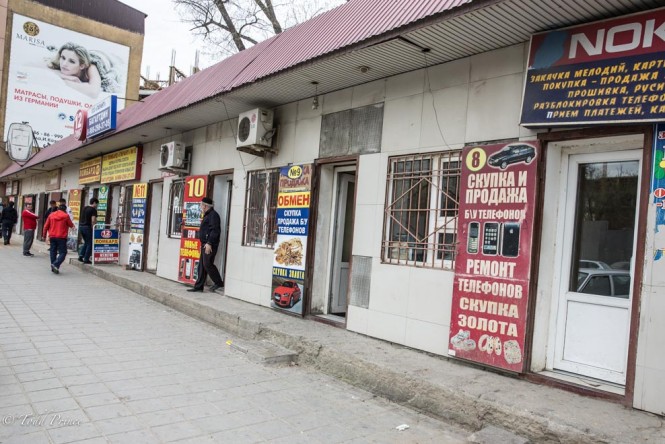 There seem to be nearly 100 pawn shops situated in a narrow part of the city.

What surprised me even more than the abundance of pawn shops was all the home construction in Makhachkala and on its outskirts.

Dozens of apartment buildings – some seeming quite nice – were going up. In all, it looked as if several thousand apartments were being built. 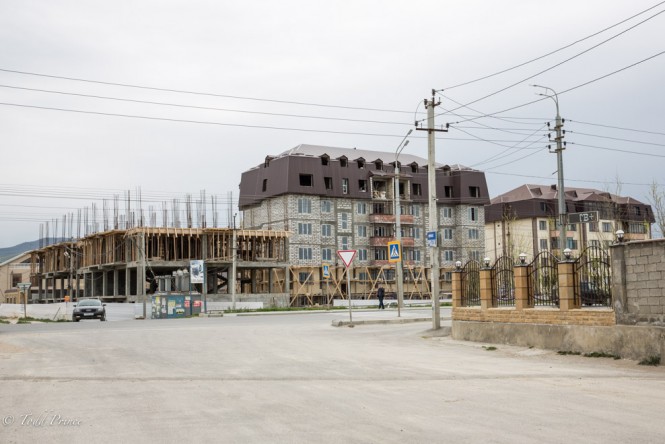 Makhachkala will need to build new roads quickly to avoid the housing construction spree leading to a transport collapse.

In addition to the apartment buildings, there were hundreds of private homes being built in the outskirts of Makhachkala.

Based on the amount of home construction, Makhachkala didn’t seem to fit the bill of the capital of Russia’s most depressed region…or even one at the bottom of the list. 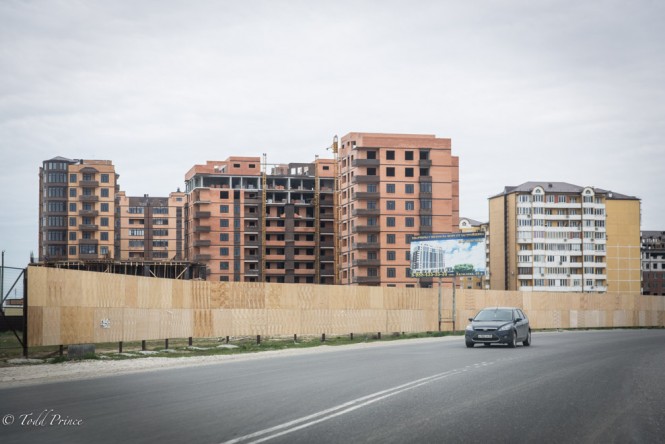 Dagestan is considered an economically depressed region, which raises questions about housing affordability.

Makhachkala residents said demand for housing was coming in part from people leaving Dagestan villages for the capital and its outskirts.

These villagers would be among the poorest in Dagestan as jobs are very hard to find in such remote locations, so hard to see how they would have the money to buy new apartments.

New housing was advertised for 25,000 rubles/sqm vs an average monthly salary around 15,000 rubles.

Home buyers would be facing 12%-14% mortgage rates – if they could even get one – so the interest could alone eat up half their salary even assuming they put down 50%.

Demand may be coming from young adults still living at home, possibly with both their parent and grandparents. Russia still has a low per capita-to-living space.

Makhachkala’s wealthier residents may either be buying the new apartments with plans to rent their old, Soviet-era homes to villagers/young adults or simply upgrading to better living quarters. 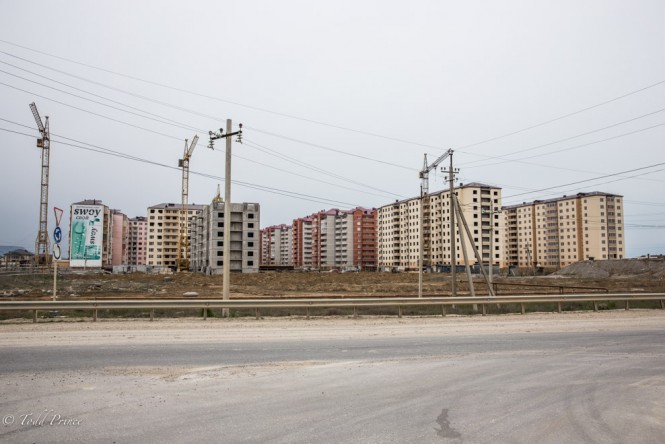 Nonetheless, something doesn’t seem to add up. Either Dagestan building companies are going to roll over soon (and some of the construction did seem to be frozen) or Russian data isn’t capturing the wealth of Dagestan properly.

The expansion of a fashionable coffee chain and opening of several classy restaurants would lean toward the latter conclusion. 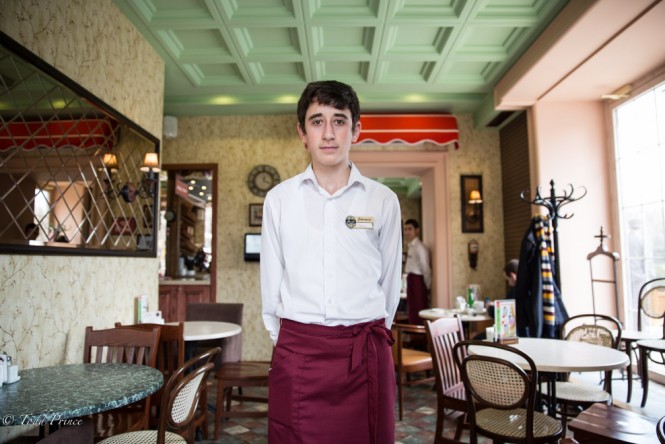 A waiter at a fashionable coffee chain in Makhachkala.

Memorabilia on the walls of this US-styled steak house outside Makhachkala. 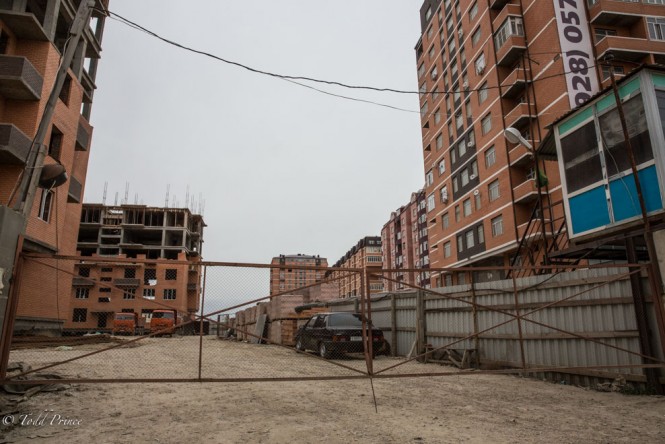 Housing construction in Kaspisky, on the outskirts of Makhachkala. 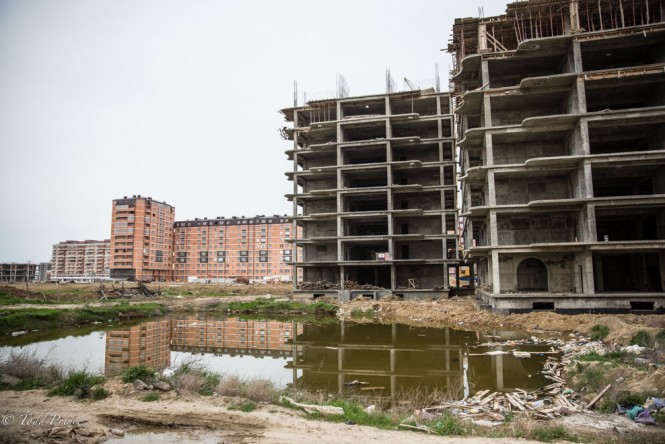 Makhachakla’s population is growing, but whether there are jobs to meet the population increase is another – very important – question. 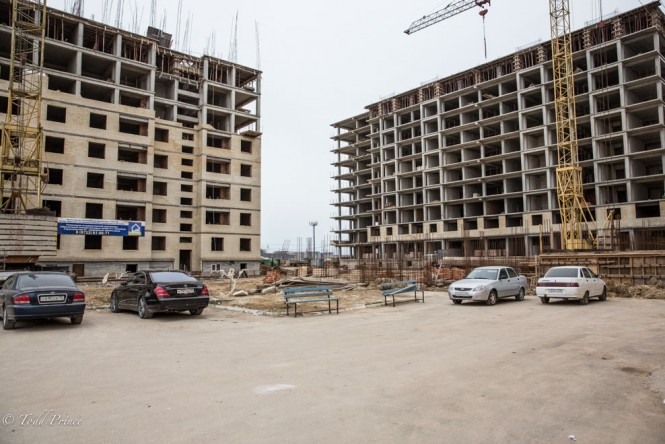 Some of the projects in and around Makhachkala seem to be moving at a snails pace based on a cursory look.

Locals says demand for housing is coming in part from people moving from villages to the city. 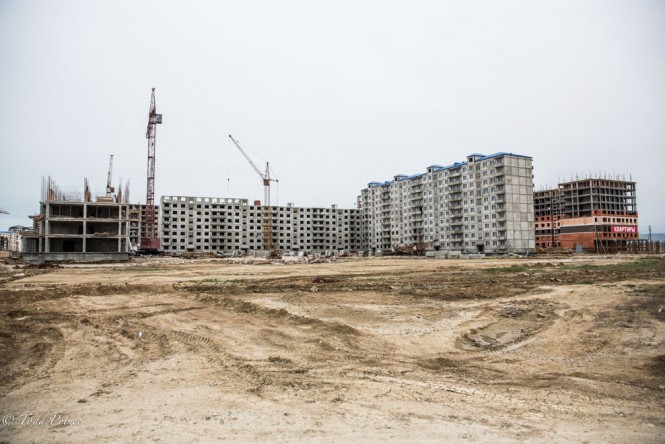 Housing projects going up on the outskirts of Makhachkala. 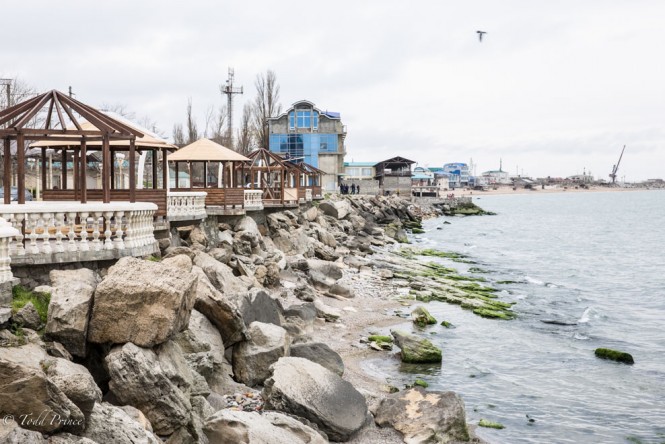