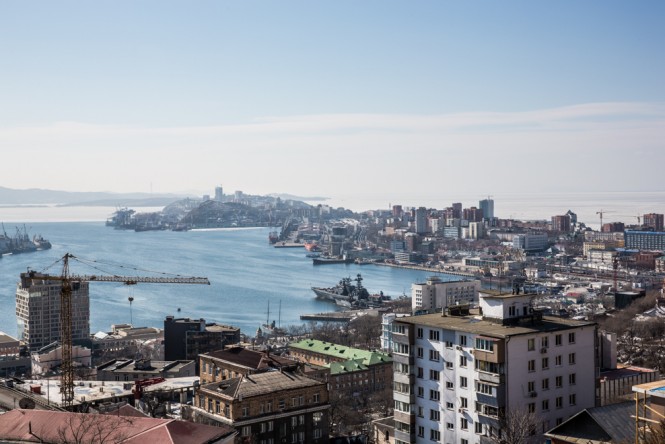 A view of Vladivostok from the top of the city.

The budget hotel I stayed at first had no hot water. Then, after a hard rain storm, had no running water at all for a day or two. The city’s sloping streets turned into rivers during the rain storm, making it nearly impossible to get to my destination on time.

Aside from a couple of fast-food spots, there were few decent cafes or restaurants. The city infrastructure was old, historical buildings in the center were in poor condition and the boats and ships in the port looked like scrap metal.

Those are some of my memories and impressions when I first visited Vladivostok 13 years ago. In short, it was a mess. 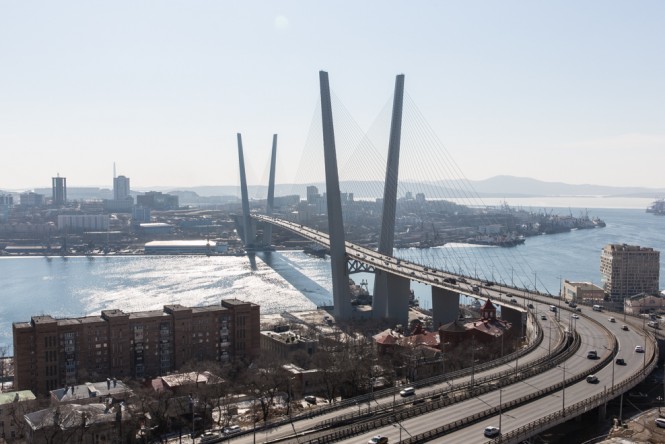 A view of one of the new bridges in Vladivostok.

A lot has changed for the better since then.

In addition to the new airport, highway, bridges and airport express train, there is a refurbished historical center with pedestrian streets containing quality bars, restaurants and designer clothing stores.

There is an upgraded seaside promenade and yacht club.

Soviet-era housing and (pre-revolutionary?) damaged wooden homes that scare the hilly landscape are slowly being removed while new, colorful housing districts with parking, shopping malls and sports facilities are being built. 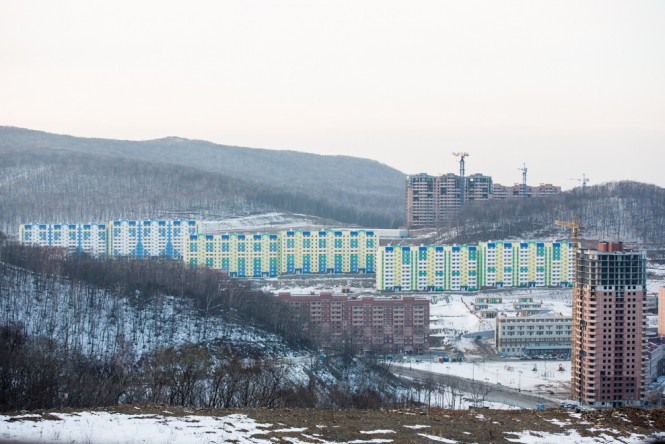 Another view of the new Snow Fall housing complex as seen from the new highway in Vladivostok.

Russian Island has been basically developed from scratch and hosts a huge, modern university campus with bus service for the students. Finally, modern office buildings are starting to appear.

There are still problems ….there are still too many gray Soviet-era buildings and cheap kiosks that ruin the city’s look, a complaint a few locals voiced. 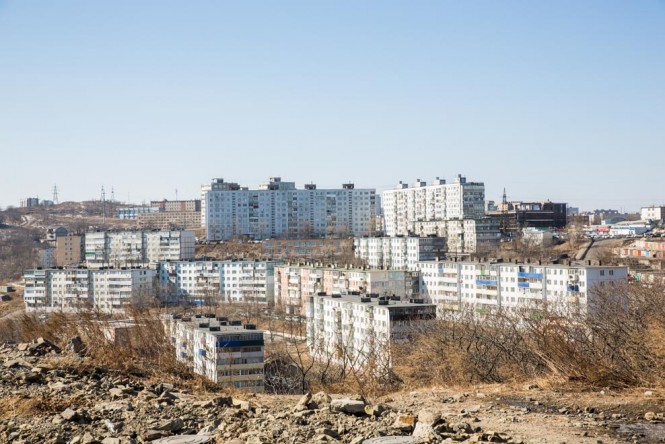 Based on my conversations, there is the lack of interesting, good paying jobs for the many young people finishing university, prompting them to look to other Russian towns or abroad for work.

Finally, there is the lack of of something a bit more intangible – buzz, lights and energy – that you feel in towns of the neighboring Asian countries. Many Vladivostok natives travel to Asia and several highlighted this missing aspect. 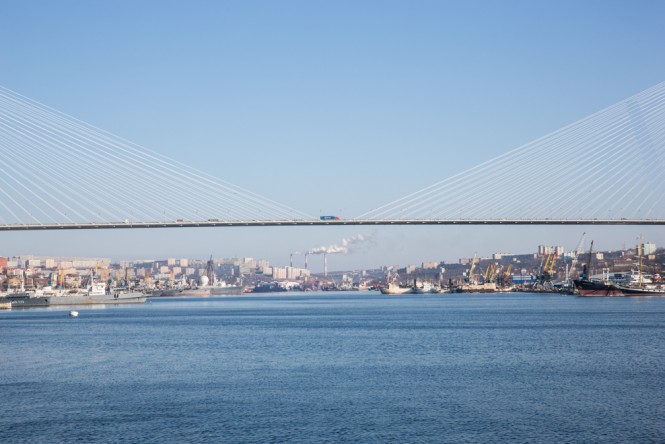 A truck crossing the bridge with the cityscape in the background.

While Vladivostok has the nature, it won’t attract many foreign tourists – other than out of curiosity – until it can make more progress on modernizing its cityscape and creating more recreational and sporting attractions. 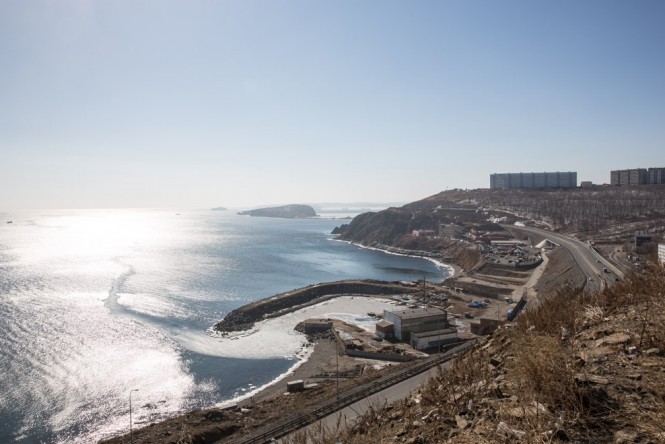 The sharp decline in the ruble value has erased one previous hinderblock for tourism – high prices. More budget-constrained travels can find Soviet-styled, but comfortable, hotel rooms for $30/night. 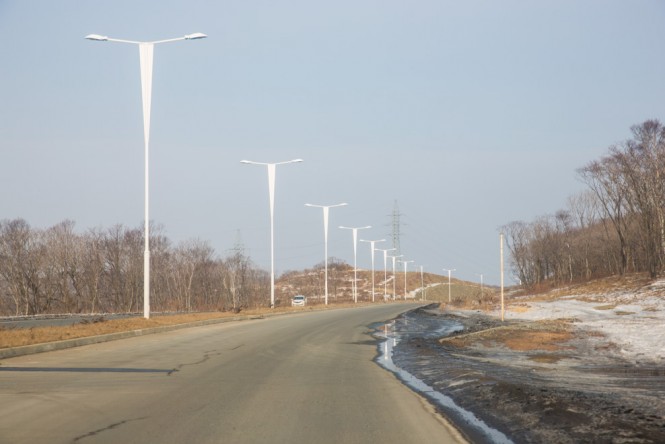 If Vladivostok is able to make more progress on the infrastructure and recreational offering – thereby also creating good tourism jobs – it will be able to hold on to its mobile youth, rather than seeing them migrate from the city for Russia’s western towns like St. Petersburg. 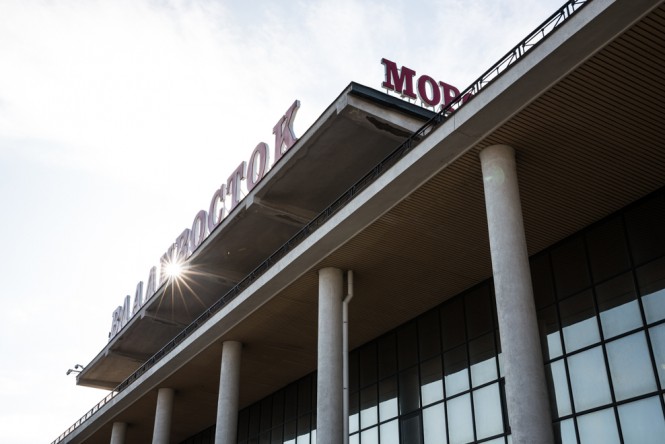 The sun breaking through the ‘Vladivostok’ sign at the train station.

What Caught My Eye

I was impressed by the number of 20 year-olds that said they are -or plan on – starting their own businesses. As one 25 year-old man told me, ”there is a trend” of people launching businesses rather than going into secure government jobs. 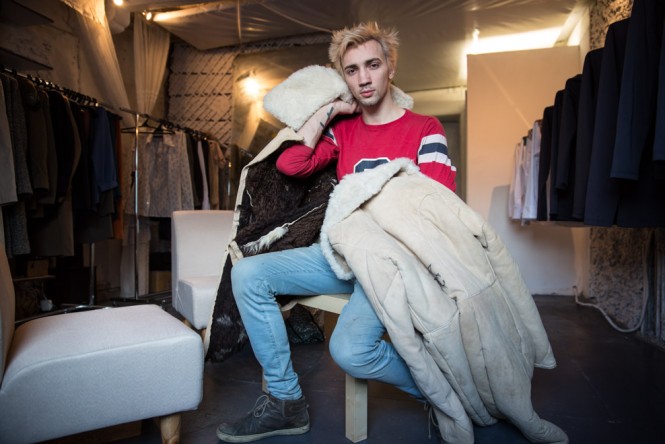 Igor just opened his own fashion boutique offering his own line.

The new Snow Fall high-rise housing complex that one drives by on their way in to town from the airport is what Vladivostok housing should be like.

Compared with the Soviet-era housing, it has colorful facades and social infrastructure such as a school and sporting complex as well as a shopping mall. 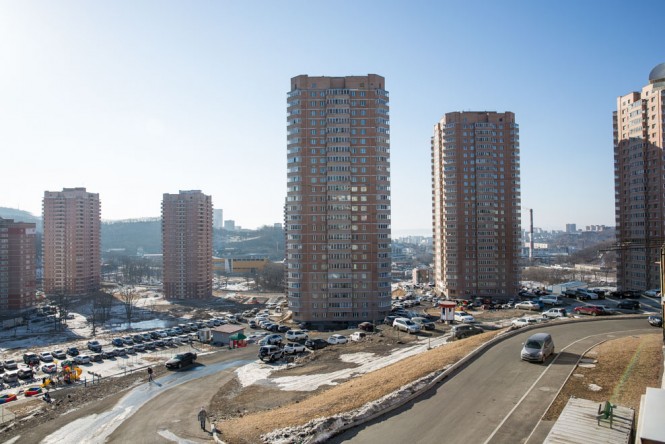 While people have been talking for years about Chinese flooding across the Russian border, there weren’t many to be seen in Vladivostok. Aside from the few at the airport and at the ‘Chinese Market,’ I really didn’t come across any.

On the contrary, I was told that many Chinese are leaving because it is no-longer economically viable for them to sell their goods in Russia after the sharp ruble devaluation.

In fact, Chinese are now buying more Russian products – like milk, meat and chocolate – as it has become quite attractive in price. 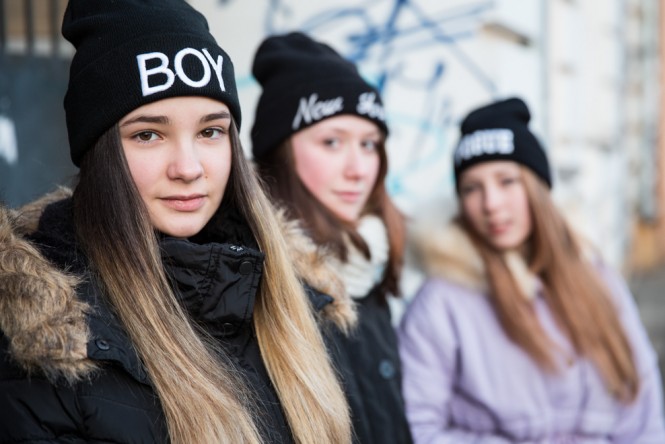 I was surprised by the large percentage of Vladivostok youth that are fashionably dressed. The city seemed more in touch with the later fashion trends than many cities of its size – or bigger – in Western Russia.

As one young man pointed out, as a port town located close to foreign countries, Vladivostok has historically been more in touch with the latest trends than most Russian towns.

Vladivostok also has plenty of kiosks standing along the roads that sell hot coffee and sandwiches to drivers looking for a quick bite and drink. Many are called ‘Pit Stop’ for that reason. You don’t find such kiosks in western Russia.

Finally, despite being a town of about 600,000, the city feels more like a town of one million. 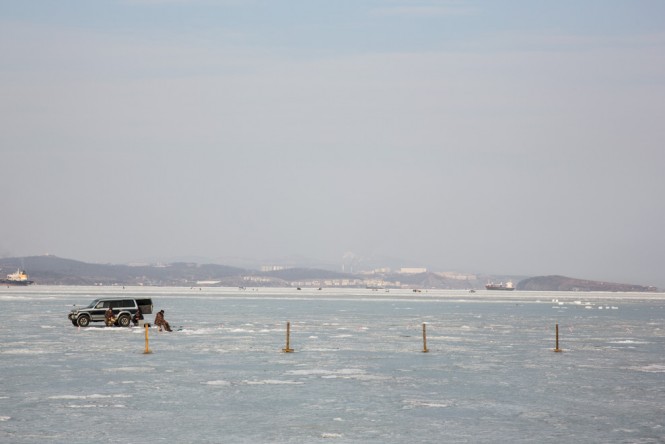 A man ice finishing in the sea off Vladivostok. 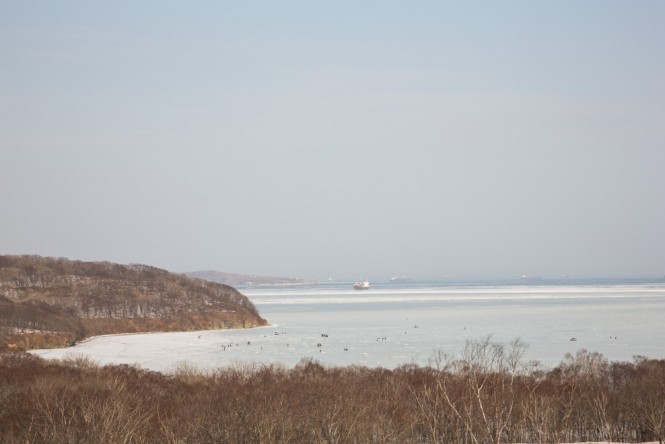 The little black dots on the ice are Russians ice fishing. 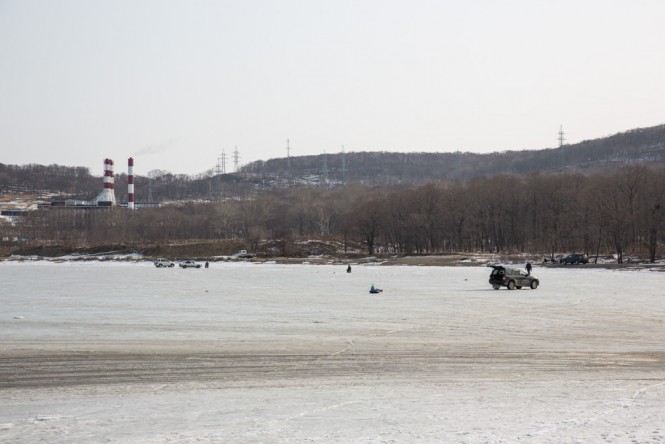 A young child sitting on a tube and being pulled along the ice by a car. 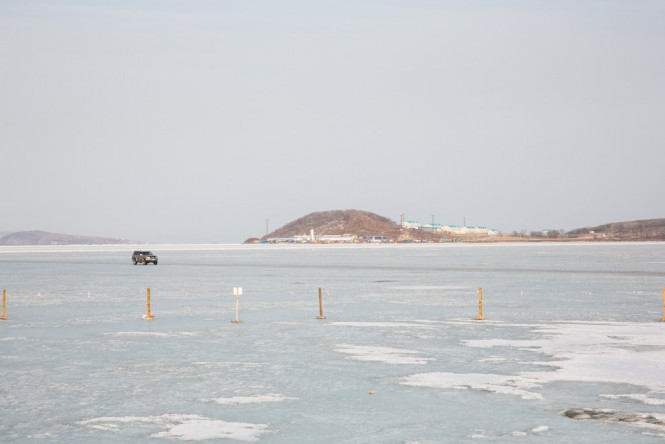 Driving over the ice in the sea off Vladivostok. 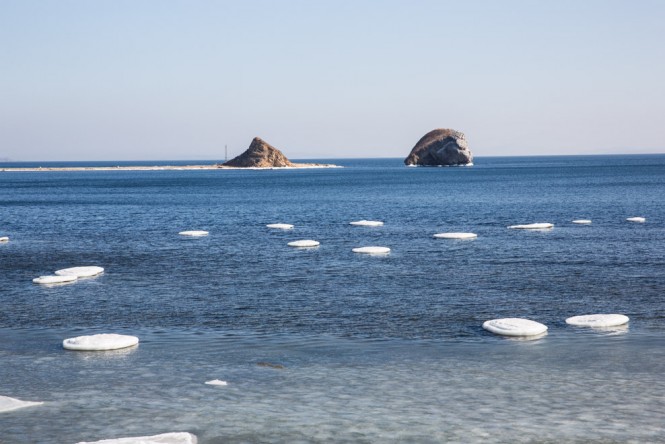 The landscape off Vladivostok 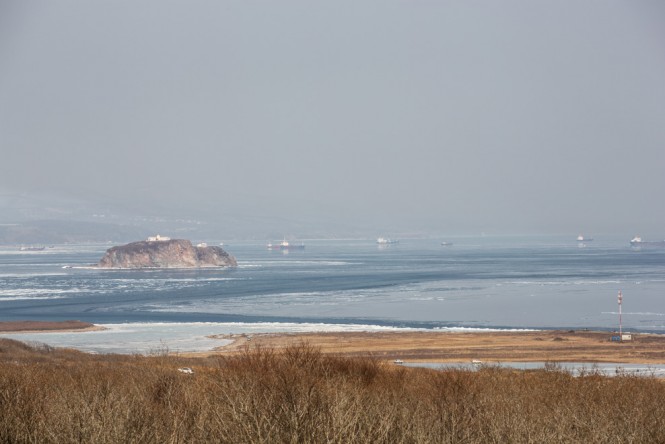 The landscape off Vladivostok. Ships can be seen in the background.