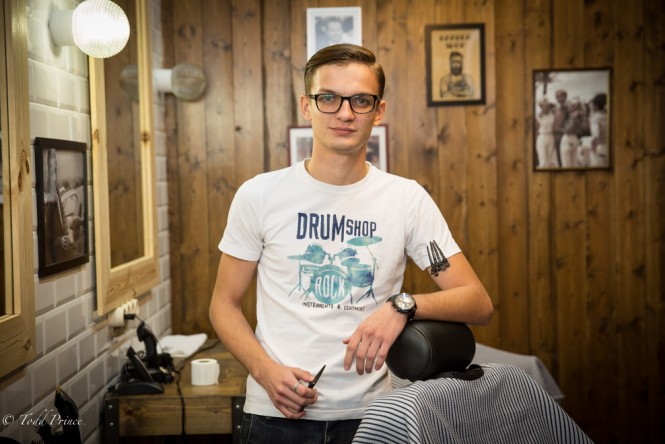 Kirill, a barber in Stavropol in the south of Russia.

From Vladivostok on the Pacific Ocean to St. Petersburg on the Gulf of Finland, American-style barbershops are popping up all over Russia these days like mushrooms after a rainstorm despite the nation’s worst economic slowdown in nearly two decades.

The shops are tapping in to pent-up demand from style-conscious, cosmopolitan young men for the latest in personal grooming. And they are charging a relatively hefty price for the new service.

More than 100 men’s barbershops – most sporting retro barbershop chairs and decked out with mid-20th century US paraphernalia – have opened over the past 48 months in Russia. Owners say that despite the pace of growth, there is still more room for expansion.

”The number of barbershops is still low compared to the size of the country,” said Alexei Lokontsev, the owner of Top Gun chain. ”For instance, there are almost no barbershops in the Moscow suburbs.” He aims to double the number of stores he has in Russia over the next year, focusing in part on the suburbs.

The men’s grooming revolution in Russia started when three friends opened Chop-Chop in the center of Moscow in Sept, 2011.

Demand was so strong among the city’s hipsters that Chop-Chop’s owners pulled a page from McDonald’s play book. They decided to gobble up as much market share as they could by promoting  franchises. Within four years, Chop-Chop marched straight across Siberia, opening shops in 42 Russian cities.

And much as McDonald’s success spurred competition, so too did Chop-Chop. Some clients quickly rushed to found their own barbershop chains, slightly altering the interior, but keeping the concept the same. 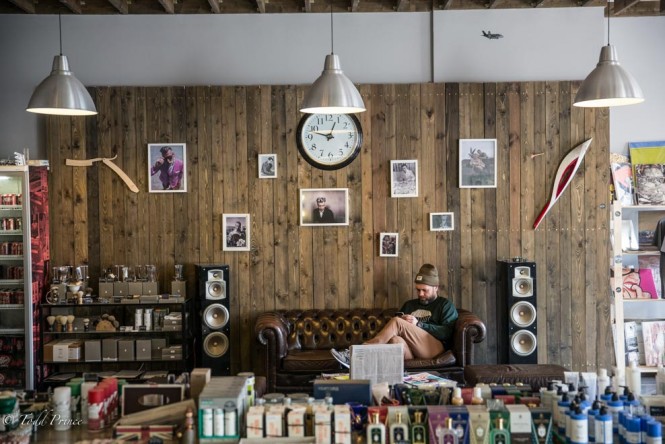 Kostya, who works in the Russian oil industry, opened Chop-Chop Samara with an Austrian friend.

While there were almost no barbershop’s in Russia just five years ago – not to mention few male barbers – they did exist in Soviet times.

However, men’s-only sections more or less died out during the turbulent 1990s, perhaps for economic reasons as much as stylistic ones.

Russia’s economy was going through immense change in late 1980s and early 1990s as Communism collapsed and private businesses began to appear.

By the late 1990s, all that remained in Russia were unisex shops, where men would get their hair cut alongside women getting theirs dyed, curled or cut. Women worked almost exclusively in the unisex shops, which mostly catered to women’s hair-care needs. 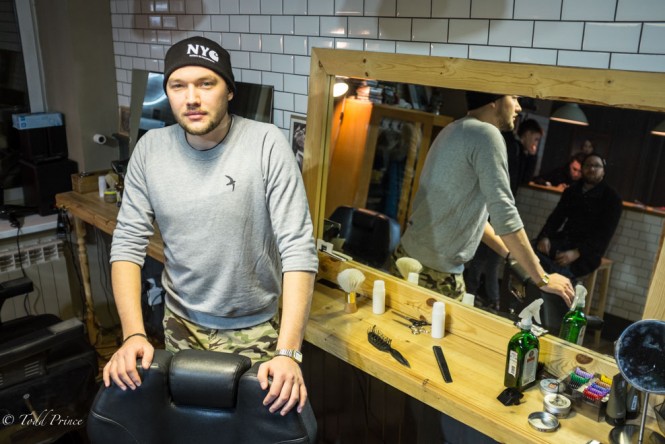 Like other owners, Boris hopes his shop will bring a feeling of culture and higher male grooming standards to his city.

By the 2010s, Russia’s economic situation had changed massively. A large and growing, young, cosmopolitan middle class had appeared in Moscow and other cities. That created the potential for change in many business areas, including the hair care industry.

According to a Forbes Russia article, the Chop-Chop owners got their business idea from a 2010 New York Times article about the barbershop trend in the US. 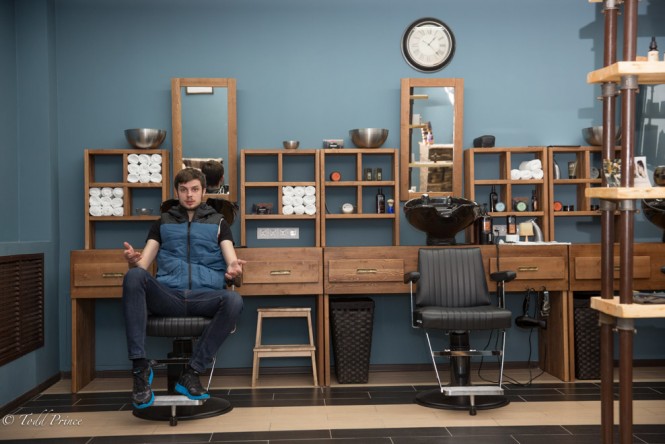 The inside of Boy Cut in Voronezh in central Russia.

Since the end of communism, Russian entrepreneurs have been using a similar business playbook: travel to New York or London, find what’s hot and bring it back to Russia in a slightly altered form.

By the 2010s, a large middle class and hipster subculture had formed in Moscow. Short, parted haircuts, beards and mustaches popular in New York were coming back in style in Russia, yet there was a deft of specialized shops to serve those styles.

Chop-Chop was in the right place at the right time. And whatever trend is hot in Moscow, it soon spreads like wildfire across the rest of Russia.

Vladimir, the co-owner of Top Gun in St. Peterburg, admits that Chop-Chop ”helped kick-start” the barbershop trend in Russia. Vladimir said he got the idea to open the Top Gun franchise in St. Petersburg after enjoying his experience at the local Chop-Chop.

Barbershops have recently opened in St. Petersburg, Voronezh, Samara, Rostov, Stavropol, Nizhny Novgorod and Chita and new ones are planned for these and other cities. 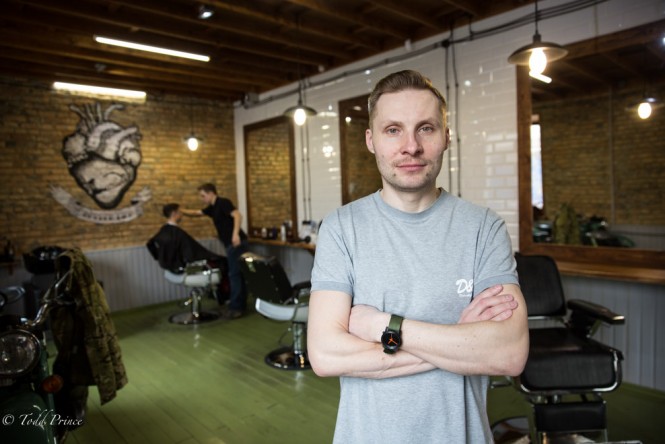 Denis opened his barbershop in Chita, East Siberia at the end of 2014.

While in cities of more than one-million, barbershops may be tapping into pent-up demand from a cosmopolitan, middle-class for such service, in other cities like Chita, a military town of about 400,000 near the Chinese border, the barbershop may need to initially develop the demand.

Chop-Chop now exceeds more than 50 barbershops around Russia. Top Gun opened three in May, including in St. Petersburg, boosting their count to 11 in eight cities.

Boy Cut has 8 barbershops in 6 cities, while Mr. Right is present in three cities.

While there doesn’t seem to be exact statistics, a look at the top barbershop chains and the stand-along shops around Moscow and large Russian cities, it would be fair to stay that at least 100 ‘new,’ old-fashioned-style barbershops have opened Russia within the last four years, or two per month. 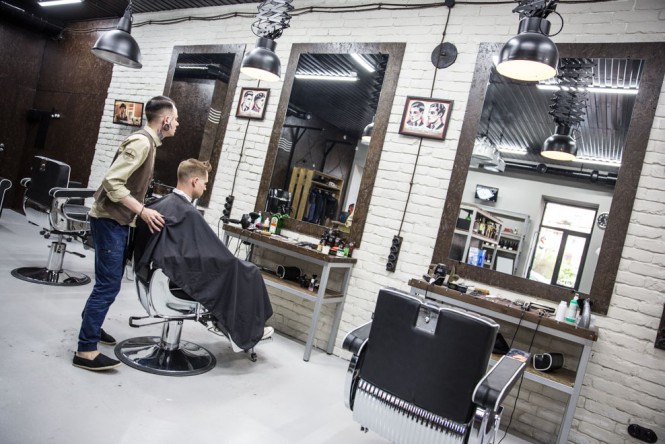 Artur working on a client at Top Gun in St. Petersburg.

The barbershops may reflect changing attitudes among men in Russia towards their looks, some say.

Valeria, a barber in Nizhny Novgorod on the Volga, said it would have been unheard of five years ago for a man to ask about the best way to part his hair.

When asked what fashion trends she sees in her hometown of St. Petersburg, Anastasia, a 25 year-old model, didn’t responded by pointing out the latest jean style or dresses. She highlighted the better appearance of men. 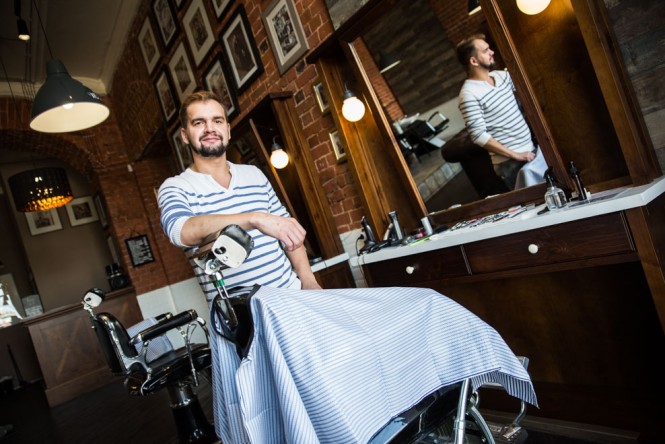 Valery has been working as a barber for nearly a decade. He says men are starting to take a greater interest in their looks and hairstyles.

The barbershops employee almost exclusively men – though some owners say there is a problem at the moment finding experienced male personal – and are generally fitted with the traditional red-white-blue barber’s pole.

The walls tend to be covered in black-and-white photographs of actors from the 1950s or 1960s and retro-style advertisements. Nearly all the barbershops offer various men’s grooming products, such as American Crew. 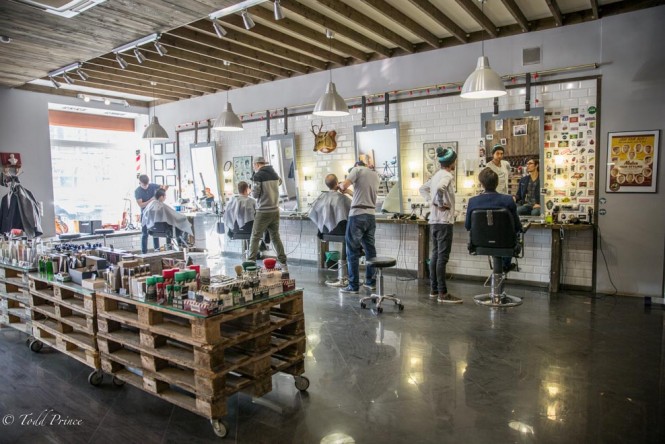 Inside the Samara barbershop Chop-Chop. Men’s care products are on sale in the middle of the store.

Many of these barbershops offer free coffee, alcohol or cola to clients while they wait and have become places where friends may come to hang out as I found out in Chita, Samara, Rostov and Voronezh. 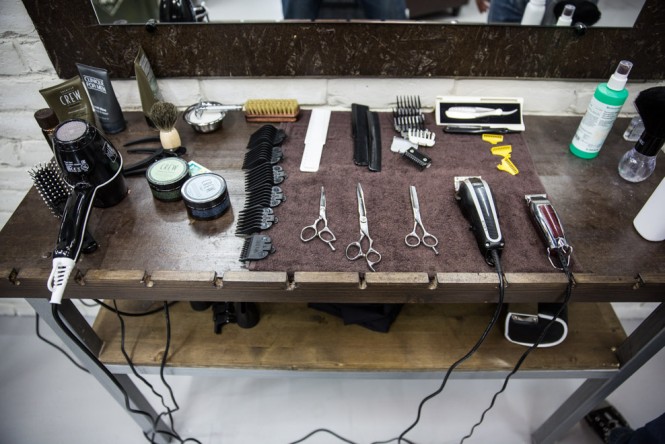 The barber’s tools at Top Gun in St. Petersburg.

As the number of barbershops in Moscow and Russia in general is still relatively small compared to the size of the population, the trend seems likely to continue in the coming years, especially in Moscow’s large suburbs.

Evgeny and Vladimir, the St. Petersburg Top Gun franchise owners, said they will consider adding another if the economic situation in Russia remains stable.