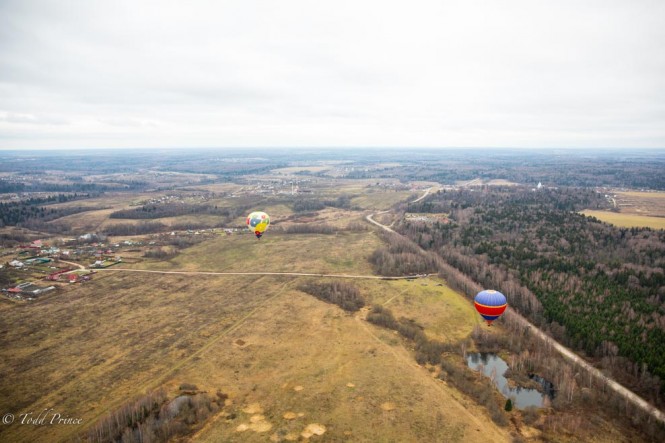 Two hot air balloons follow us over the Moscow suburbs.

After taking my first-ever trip on a hot air balloon during the taping of a Russian travel program in St. Petersburg, I decided to look at hot air balloon options in and around Moscow.

A Google search took me to Groupon’s Russia page, which offered a 50% discount on a hot air balloon ride with Aeronavt. The stated price on Groupon was 3,990 rubles ($86) for a 40min-60min ride outside of Moscow.

Russia doesn’t have a good reputation for safety, especially air safety, so I checked out Aeronavt’s website (www.aeronavt.ru) and read some reviews before buying a ticket via Groupon.

If you buy via Groupon, you have to call Aeronavt a few days in advance to let them know you want to join. You have to give them 48 hours if you want to reschedule for another day.

Here is a video of the air balloon being blown up in time lapse mode. The video is 30 seconds long, though it took about 4 minutes to fill it up.

I signed up of a Sunday in November as the forecast called for partially cloudy weather. Unfortunately, the forecast was wrong and it was a heavily overcast day with fog. I probably couldn’t have chosen a more dismal day to go. 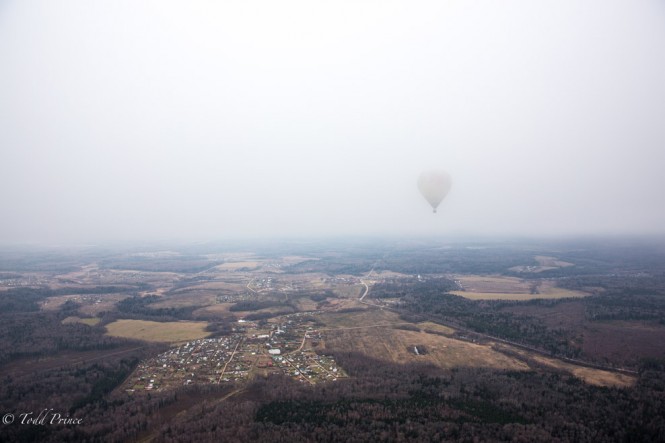 A hot air balloon disappears into the low-hanging clouds. The overcast weather was the biggest drawback of the trip.

Aeronavt takes off from various spots outside Moscow, but the 16-person ride lifts off from a field near Dmitrovsky Highway. Aeronavt asks you to meet them near a train station off the highway at 2pm. The train ride is one hour from Moscow and leaves at 12:11.

Aeronavt drove all 16 of us in a minivan for about 15 minutes to the take off site, where other balloons were being readied for lift off. The Aeronavt team pretty quickly got the balloon ready and gave instructions while we flew.

We climbed to a hight of 800 meters, going into the low-hanging clouds at some points. While it was interesting to be inside the clouds at one point, I would have preferred a sunny day to get a better glimpse of Moscow region and capture better photos. 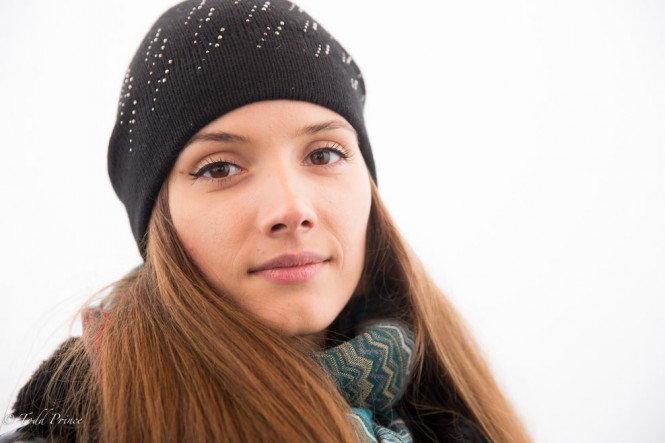 A portrait of a passenger as we entered the clouds, which created the effect of a big, photo studio softbox.

Our flight was about 45 minutes long. After landing, Aeronavt gave each of us a glass of champagne (except children) and certificate to celebrate the flight.  We got back to the train station to catch the 17:39 train returning to Moscow.

Overall, it was a fun way to spend a day in Moscow, but I wasn’t ‘wowed’ by the view of the area we flew over as I had been by hot air balloon my ride over the outskirts of St. Petersburg.

Aeronavt has various offerings, including a ‘romantic’ ride in a red, heart-shaped balloon as well as one with a transparent bottom. You can check their site for details. 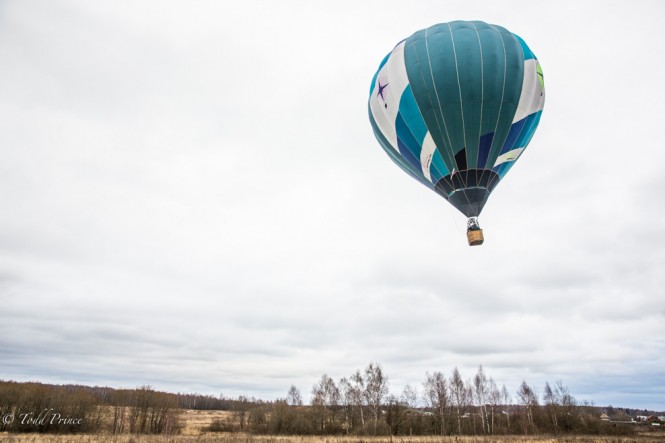 A hot air balloon taking off outside of Moscow on an overcast November Sunday. 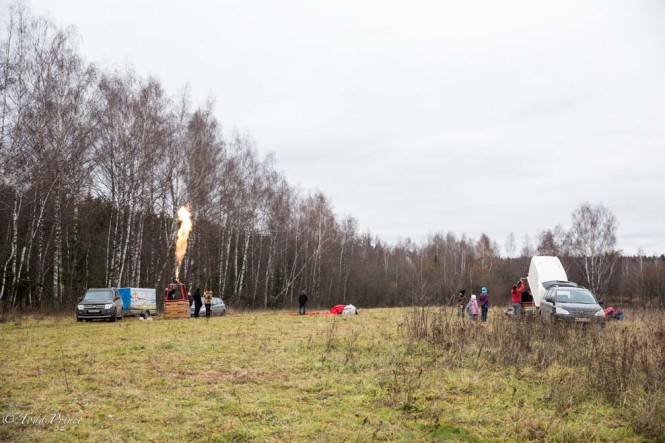 Workers testing the hot air before setting up the balloon. 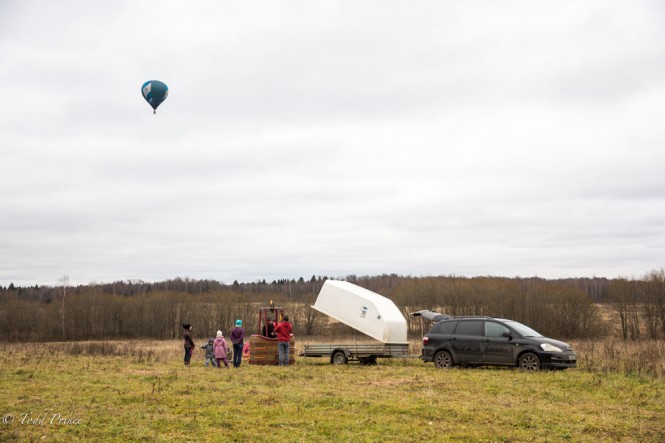 A family preparing to take off in a hot air balloon as another one flies into the distance. 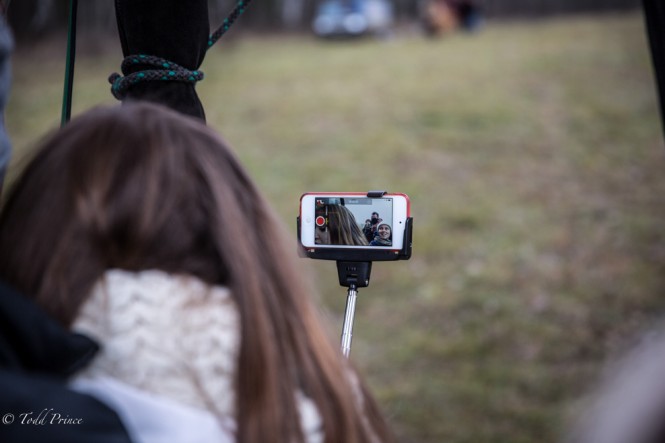 A hot air balloon ride is a perfect excuse for some selfies. 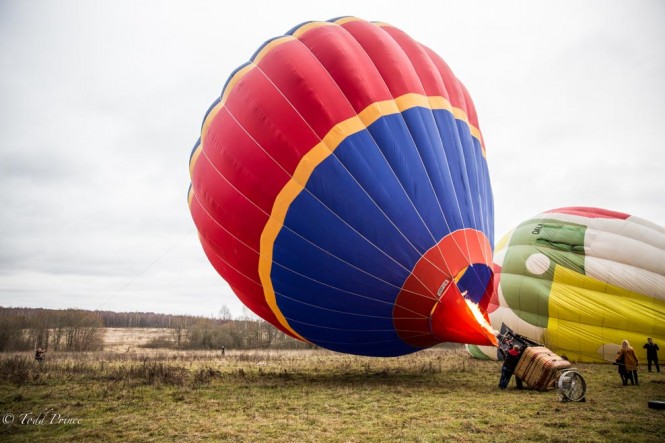 Workers about to finish filling up a hot air balloon. 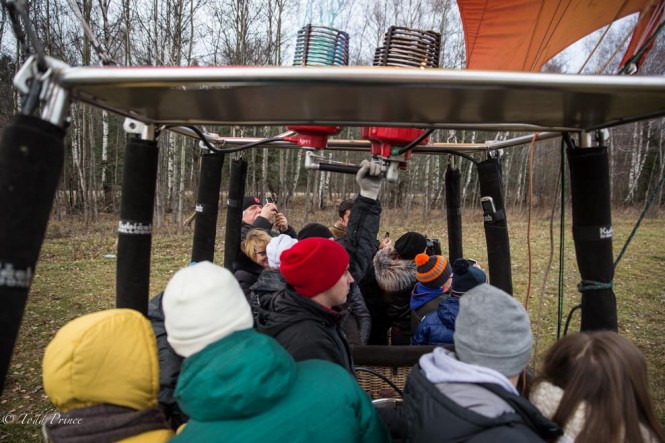 Our 16-passenger hot air balloon right before takeoff. It has room for two pilots/instructors as well. We had one, the man in the red hat. 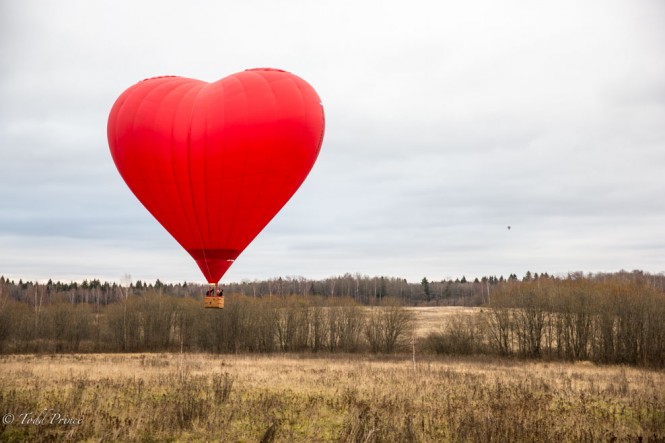 Aeronavt offers a ‘romantic’ ride in a red, heard-shaped hot air balloon. Here it is taking off. 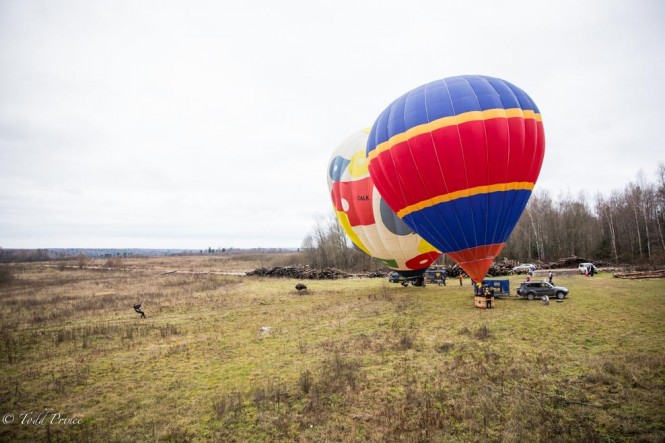 This shot is taken shortly after we lifted off. Below, two more hot air balloons ready for takeoff.

A hot air balloon flying over the forests outside Moscow.

The autumn forests outside Moscow as seen from about 600 meters. 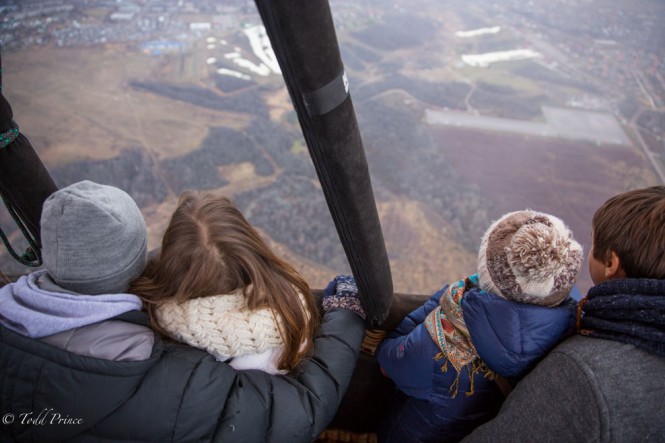 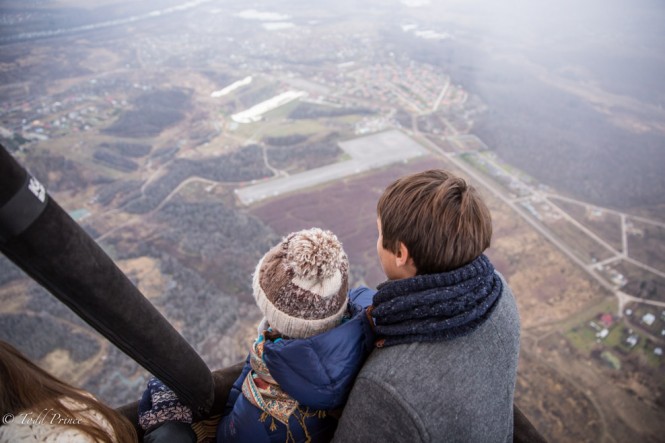 The view on a very overcast day doesn’t look that exciting. 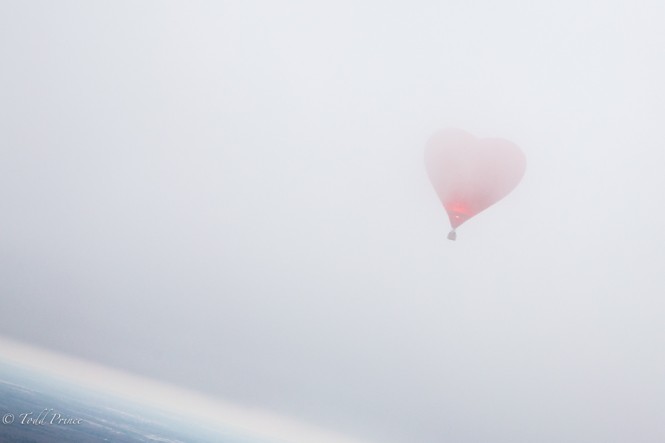 The romantic balloon drifts into the clouds. 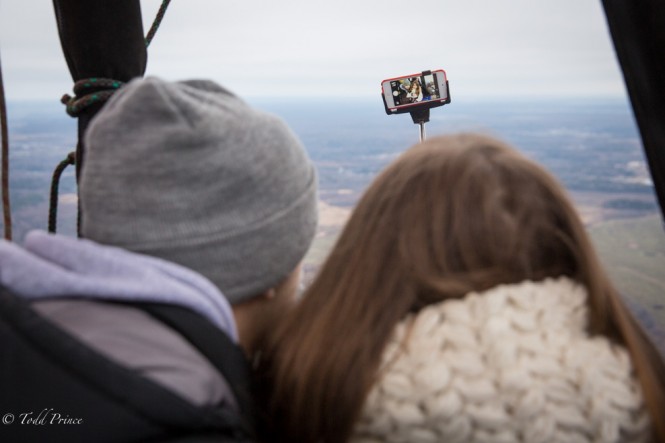 A selfie from the sky. 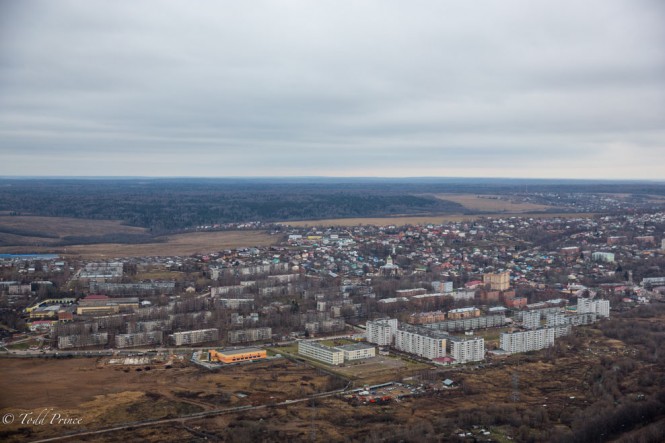 I would have liked to fly over this small town on the outskirts of Moscow at a lower height to see more detail. 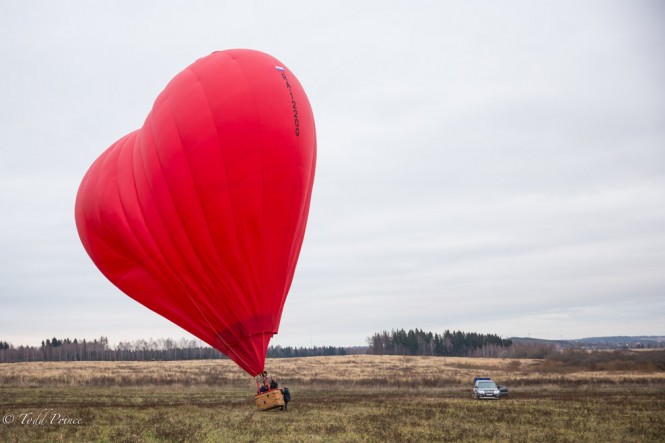 The couple landed saftely….but I wonder if their relationship survived the trip intact. 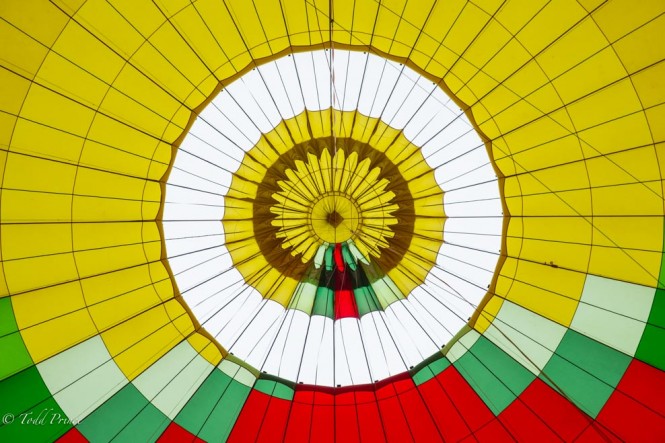 A look inside our balloon, the largest tourist balloon in Russia. 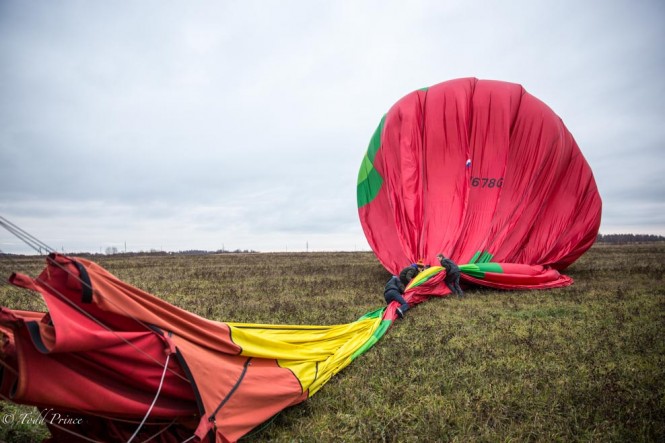 The crew working to wrap up our balloon after our flight, which went smoothly and safely.