This young boy reaches out to his mom as the cold water causes him pain.

If there is one Russian religious event that captures Western imagination, it is perhaps Epiphany, which recalls the baptism of Jesus by John in the Jordan River.

The Russian Orthodox faithful remember the event every January 19 by entering water – be it a lake, river or pond – and completely immersing themselves underwater three times, making the sign of the cross before each dunk.

As Russia lies in the northern hemisphere and Epiphany occurs in winter, the water is only a few degrees above freezing. That said, the whole process is quick, with most in and out of the water in under a dozen seconds. 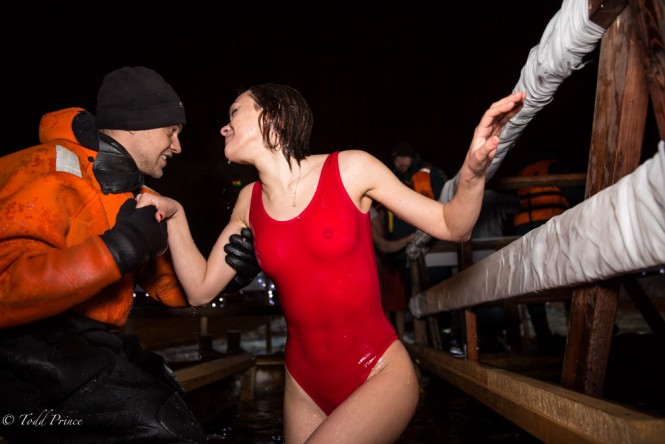 A woman jokes with workers as she exits the waters.

Ice is normally covering rivers and lakes, so holes – sometimes in the shape of a cross – have to be carved with shovels and other equipment. Outside temperatures on this day can be anywhere from slightly above 0c to -25c in most places in Russia.

Images of Russians in bathing suits entering these ice holes have become standard material for any photography book on Russia, while many photographers – like myself – just can’t resist capturing moments from this special celebration.

A father carrying his cold and wet daughter.

According to Russian state news, the Moscow City government estimated that as many as 160,000 people could participate in this year’s Epiphany, up from 80,000 just two years ago, implying increasing popularity.

Moscow this year prepared 59 ice spots for people to celebrate Epiphany, including dressing chambers, wooden steps to enter the water, workers to help people in and out of the water as well as emergency personal in case people take ill. Tea and food were served at some spots. 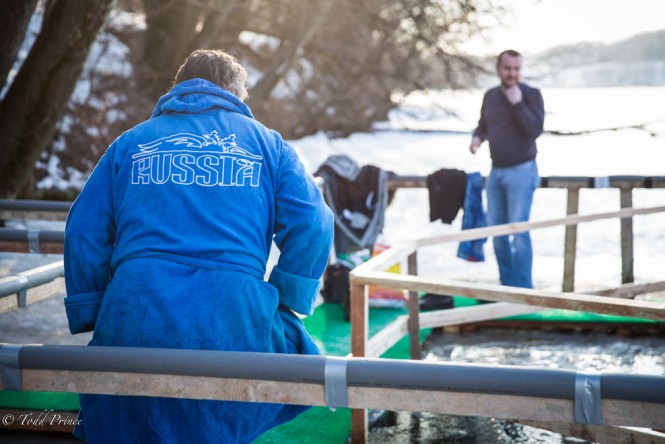 A man wearing a ‘Russia’ robe dries off as other in the background prepare to enter the water.

Thus, part of the increase in participation from 80,000 to 160,000 may simply be due to the fact that the city has made it easier and safer for people to celebrate this religious holiday, an instance of ‘build it and they will come.’

I attended the celebration at two spots in Moscow, one in the north of the city on the evening of January 18 and one in the west around noon on January 19. The temperature in Moscow on Epiphany this year has ranged from +1c during the day to -3c in the morning and at night. 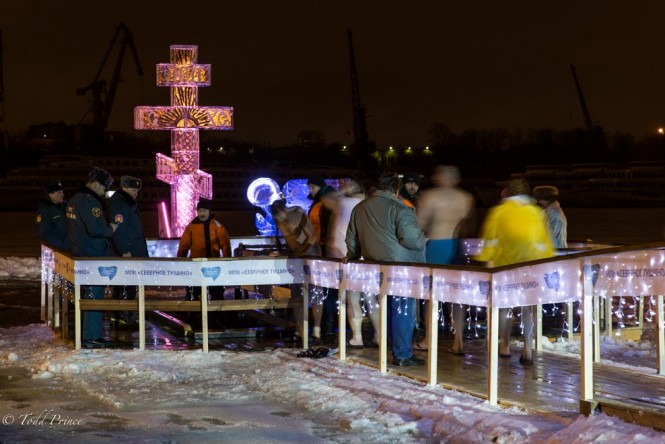 A cross stands next to the ice hole on the Moscow River on the eve of Epiphany.

Russians generally came in groups, either men with their wives and children or with their friends. Most were carrying a plastic bag with their towel, robe, bathing suit and sandals. As you will see in the photos, most men wear chains with a cross around their neck.

This mother and daughter took the plunge together.

Based on conversations and my observations, it is clear that some people come for the excitement and companionship rather than strictly for religious reasons.

The number of people making videos of themselves with their GoPros and tablets or taking selfies with their phones would support that conclusion. 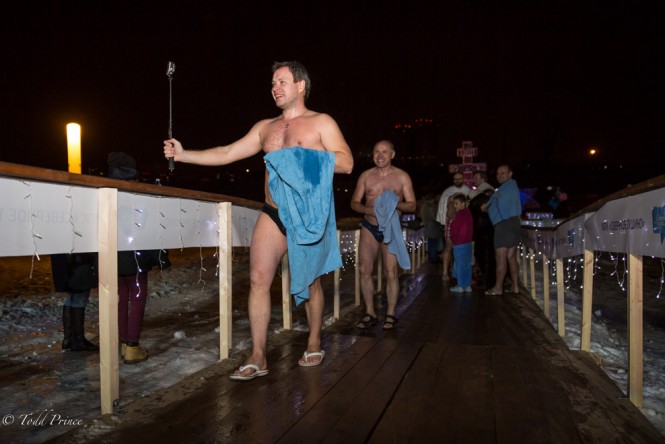 A Russian man using a GoPro to take a video of his plunge experience.

And perhaps because of the that, the atmosphere tends to be enjoyable rather than solemn.

Below is a small selection of photos. For a fuller Epiphany gallery, please click this link. 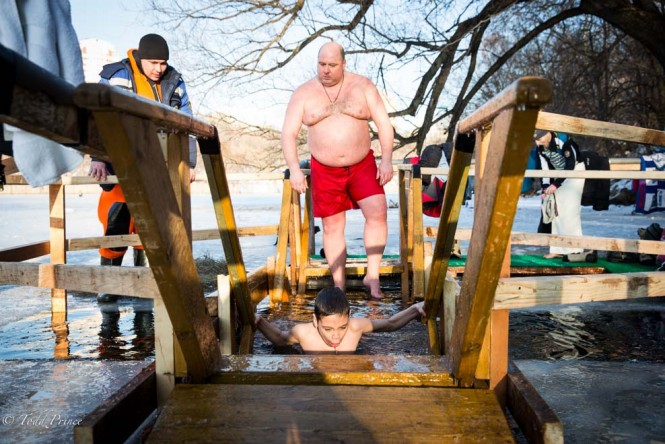 A Russian father watching his son dip into the cold Moscow River during Epiphany celebration.

A father and son’s reflection in the +2c Moscow River water. 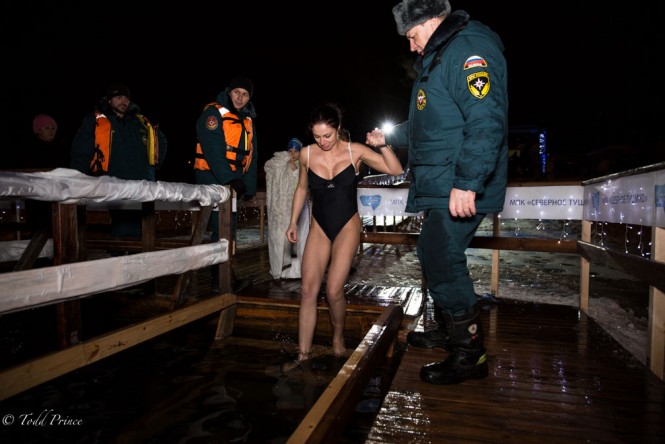 An Emergency Ministry worker helping a woman into the water as her son awaits his turn in the background. 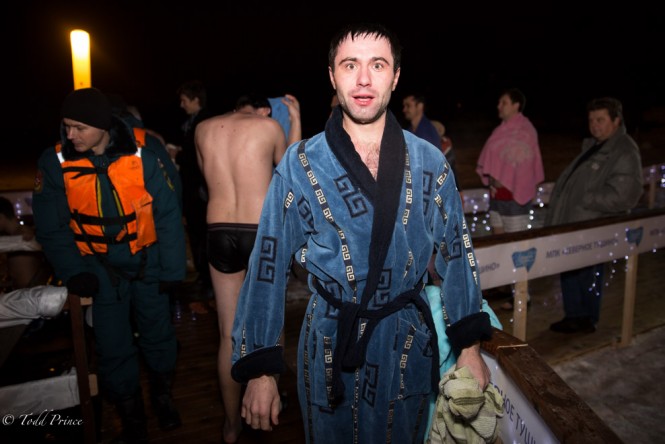 He said it was his first time celebrating Epiphany. 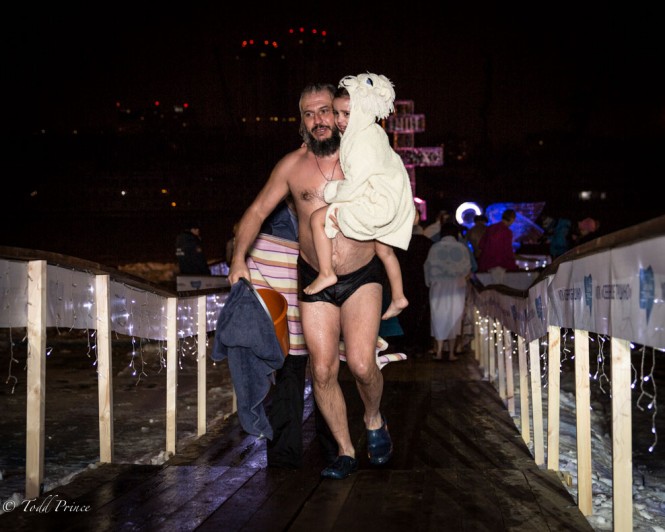 A father carrying his crying daughter, who didn’t enjoy the cold water.