The Russian Academy of Science on a cold, sunny winter day.

Like many foreigners living in Moscow, I dreaded the long Russian winter. The thick grey skies, the short days, the constant snow, the ice-covered sidewalks that make walking a sport.

On cold days, after an hour walk, your jaw and lips freeze such, that it is hard to speak Russian audibly. Your face is frozen. If you were not wise to wear warm boots, your feet are numb.

When you walk into one of Moscow’s many cafes to warm up, your boots immediately empty a pool of slush onto the cafe floor.

Thus, it is not a surprise that I have heard many foreigners say they are leaving Russia because they can’t bear to live through another Russian winter. 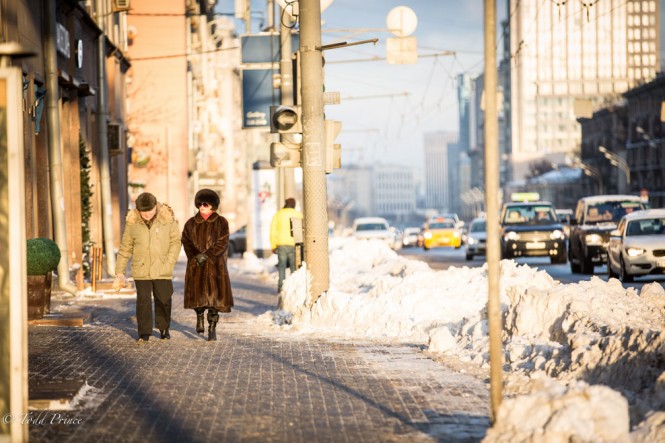 A Russian woman dressed in fur walking down Leninsky Prospect on a cold but sunny Moscow winter day.

However, my attitude toward the Russian winter changed dramatically once I became a lot more serious about photography several years ago.

I began to see the beauty in the sun low on the horizon throwing its blinding rays off Moscow’s modern skyscrapers, Soviet-era housing and pre-revolutionary churches.

The snow-covered parks and forests, where Russians take long walks with their children and friends on weekends or simply come to walk their dogs, turned into gold mines for photojournalism and landscape photography. 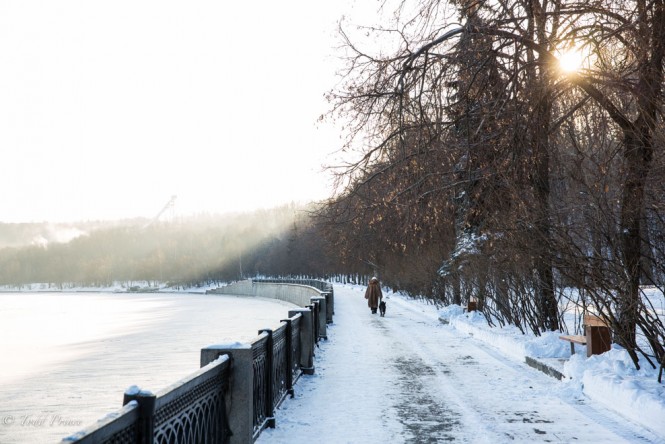 I have even come to love the brutal-looking, Soviet-era power plants, whose steam becomes visible on cold, sunny winter days.

The steam, which leaves a trail that reaches several hundred meters, turns a golden and then pinkish color as the sun sets on those stunning sunny, winter days. 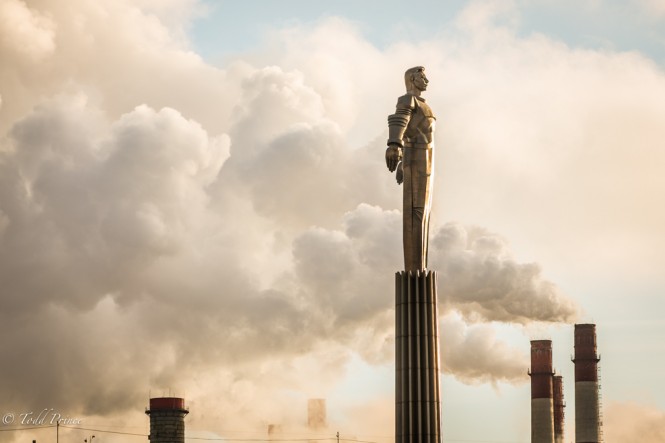 Gagarin’s blue sky background is clouded out by steam from a power plant.

And of course there is the ice fishing, with Russian men in camouflage sitting before ice holes. Sometimes they are sitting amid incredible nature outside Moscow or in the regions….sometimes along the Moscow River with factories … or power plants… in the background, creating an awkward, but photographic scene.

No longer do I chose to sleep in on winter weekends in Moscow, especially when the sun is out. I grab my camera and head to a park or to an industrial location to capture the beauty, the people and the atmosphere. 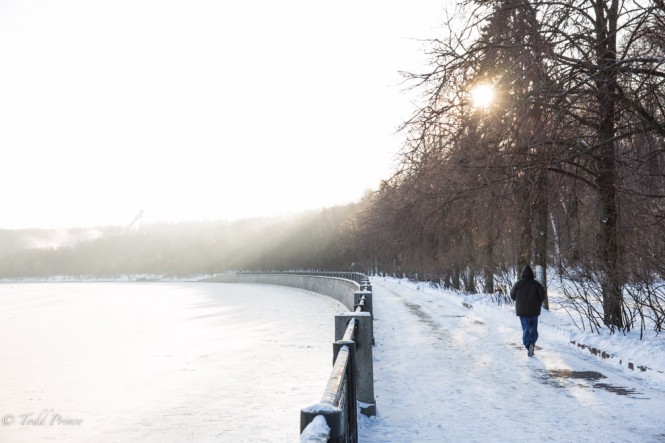 A young man jogs along the Moscow River as the sun peaks through the trees.

Thanks to photography, I have come to understand Russian poet Alexander Pushkin’s famous poem about winter in his vast country, excerpts of which are: ”Cold frost and sunshine; a glorious day! The snow below the bluish skies,  Like a majestic carpet lies,  And in the light of day it shimmers.”

The photos in this gallery where taken in the last days of 2014, mainly in the south-west and central parts of Moscow, including Red Square, where the city has set up an ice-skating ring, and Vorobyovi Gori, along which the Moscow River runs. 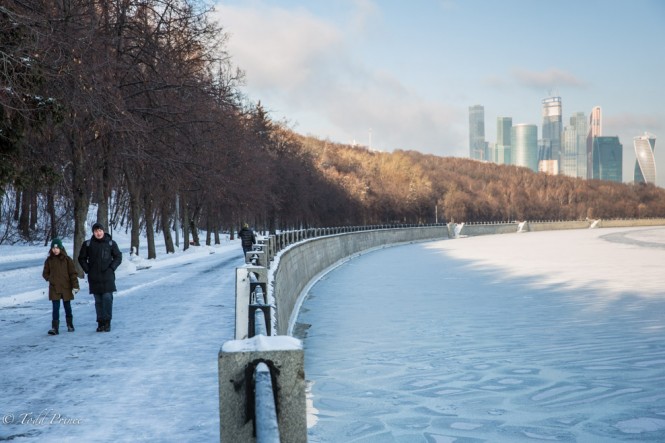 Two students walk along the Moscow River, their backs to the city’s Financial District. 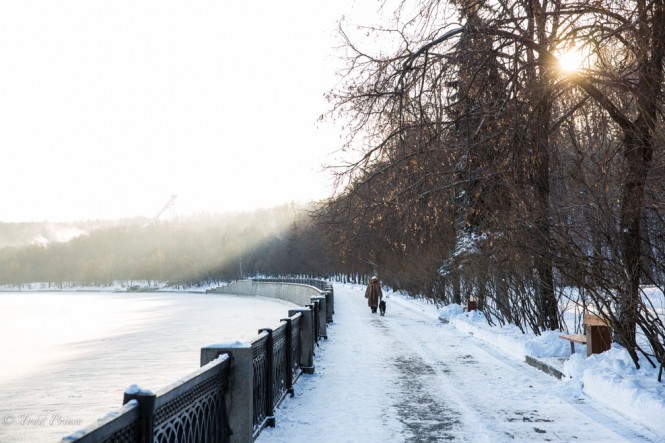 A Russian woman walks her dog along the Moscow River on a cold but sunny Moscow winter day. 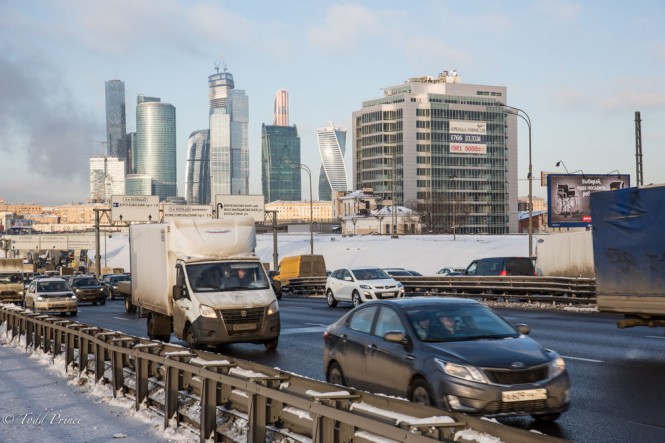 Cars pass along a major city road as Moscow’s Financial District basks in the sunlight in the background. 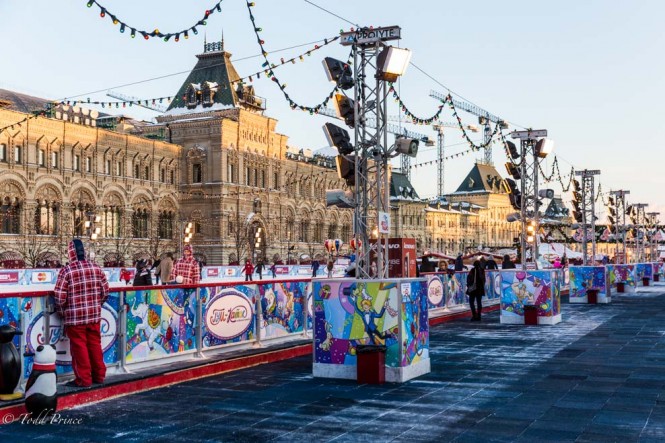 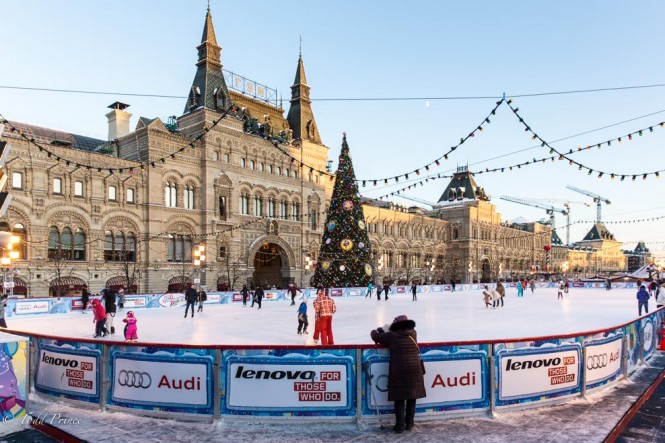 A Russian grandmother with a cane watches her grandchild skate on Red Square. 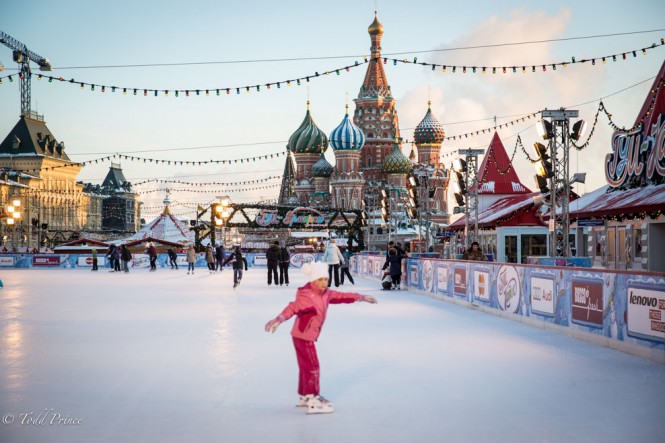 A Russian child skates on Red Square ahead of New Year’s celebration.

Russians skate in -16c on Red Square before the New Year. 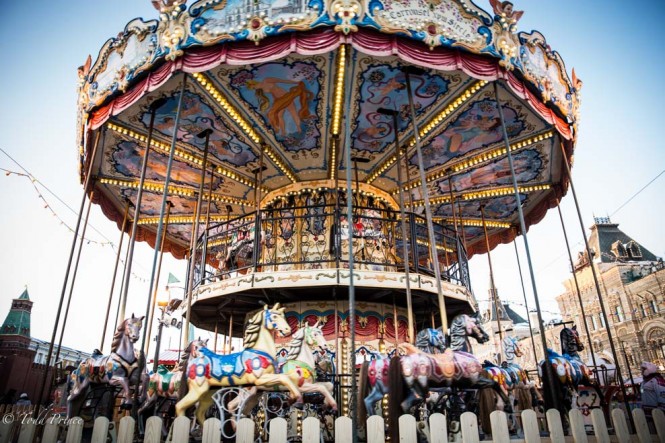 A carousel spins on Red Square at dusk. 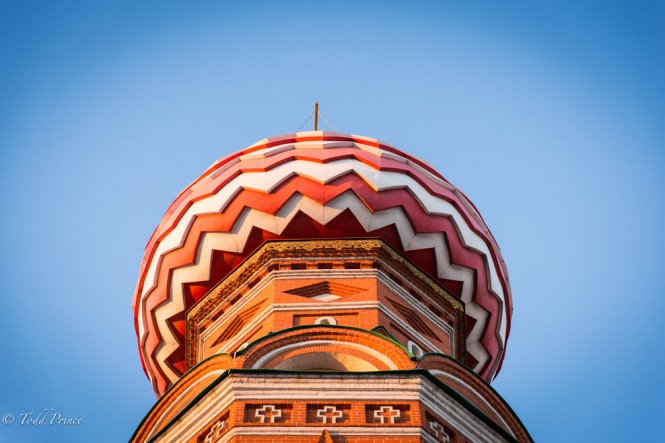 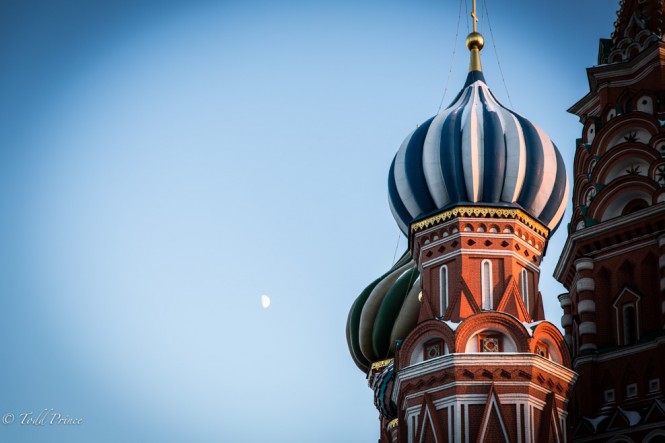 The moon looks down on St. Basil’s Cathedral as snow clings to the cupola. 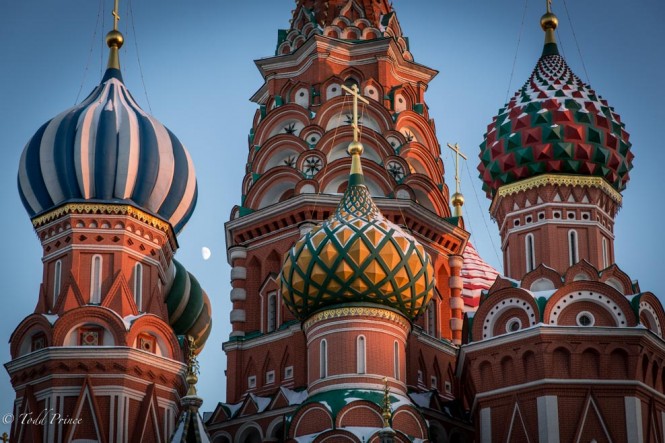 The moon peaks out between the cupolas on St. Basil’s Cathedral. 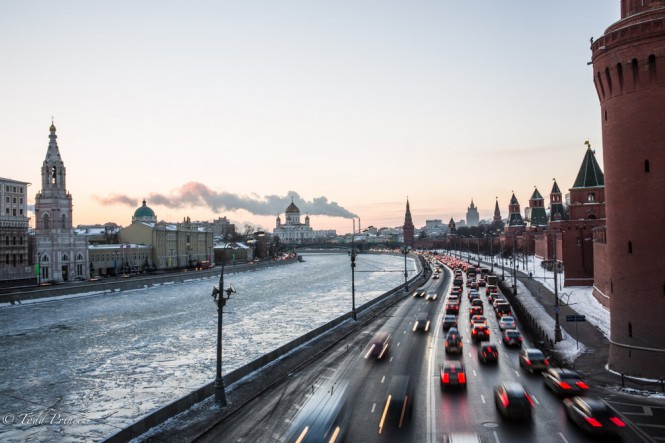 Steam rises from a power plant in the distance as traffic builds by the Kremlin. 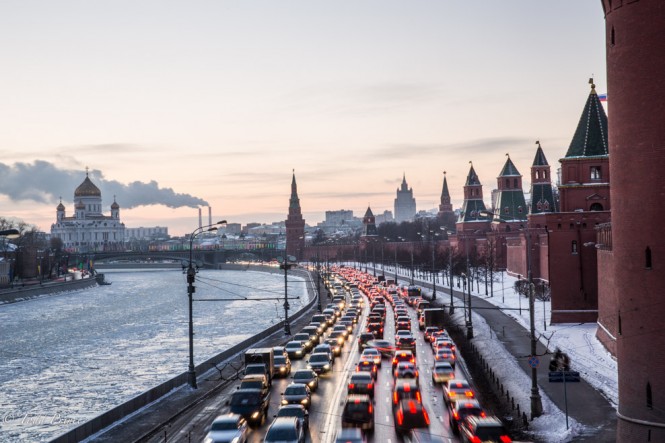 Traffic is thick near the Kremlin as many people head out of Moscow following their last day of work in 2014. 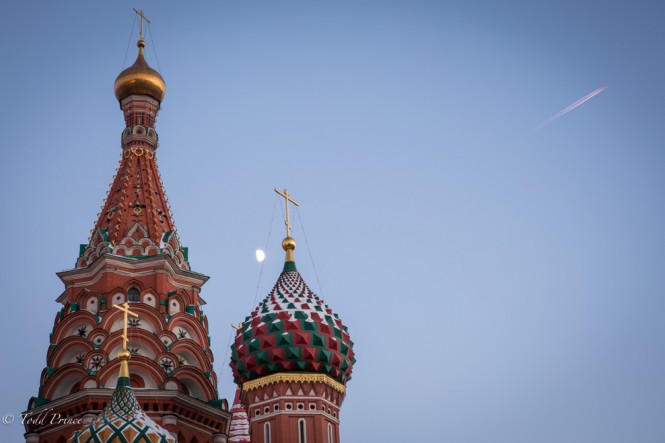 A plane flies over St. Basil’s cathedral and the moon shines between its cupolas. 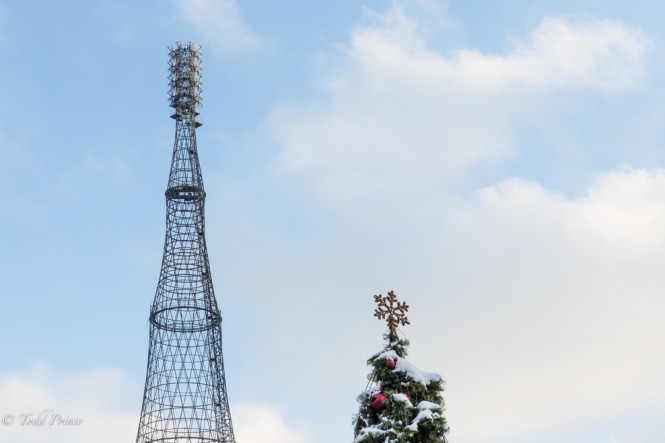 The Soviet-era Shukov radio tower rises above a Christmas tree near central Moscow. 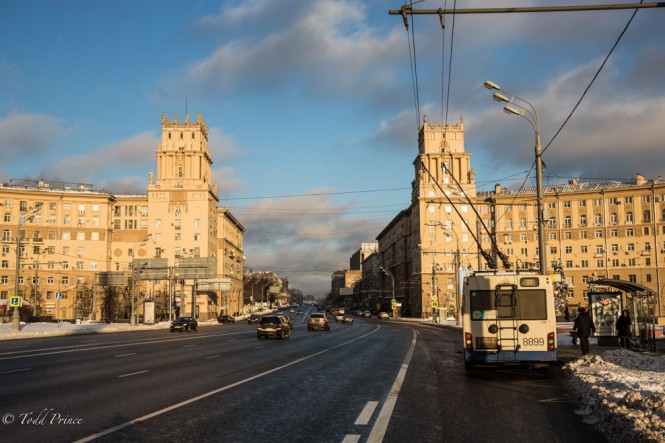 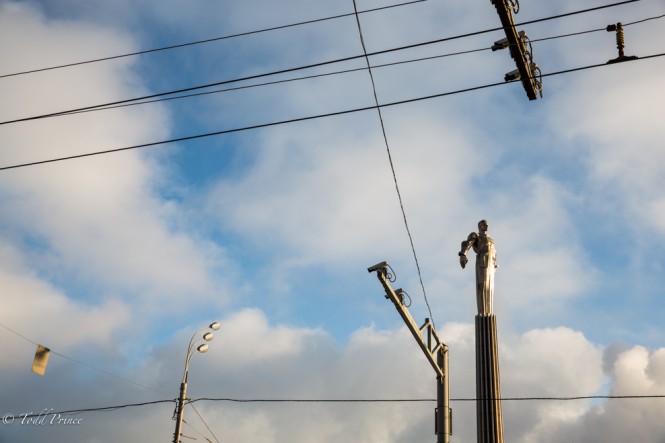 Electricity lines for Moscow buses and trams crisscross the city, creating an interesting foreground for Gagarin.

Gagarin’s blue sky background is clouded out by steam from a power plant. 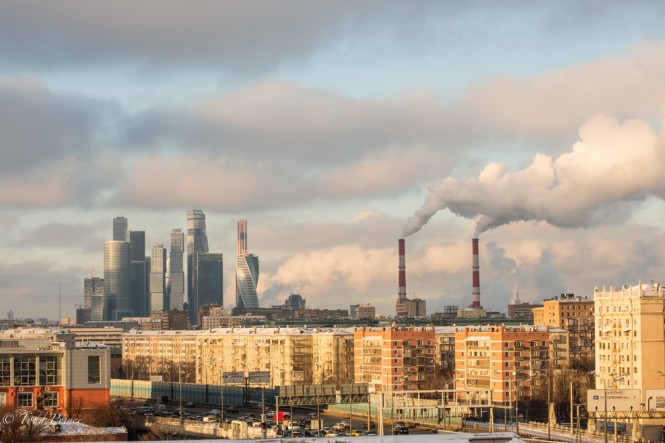 A power station releases steam near the Moscow Financial District. 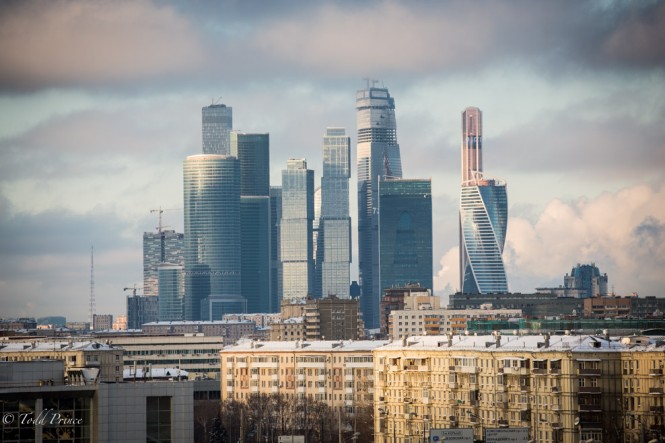 A close-up of Moscow’s Financial District on a cold, sunny winter day. 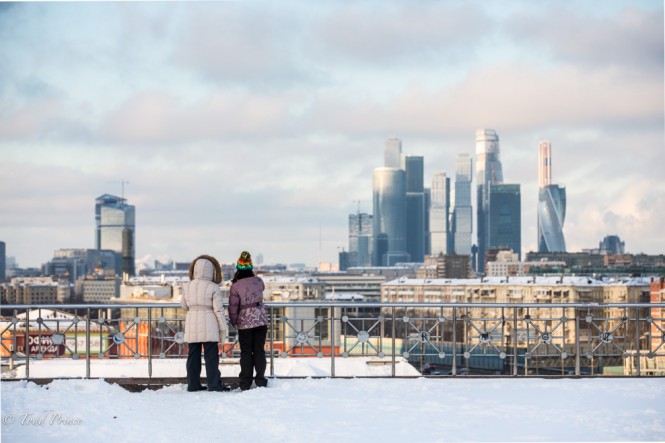 A mother and daughter look out upon Moscow’s Financial District amid a walk on a sunny day. 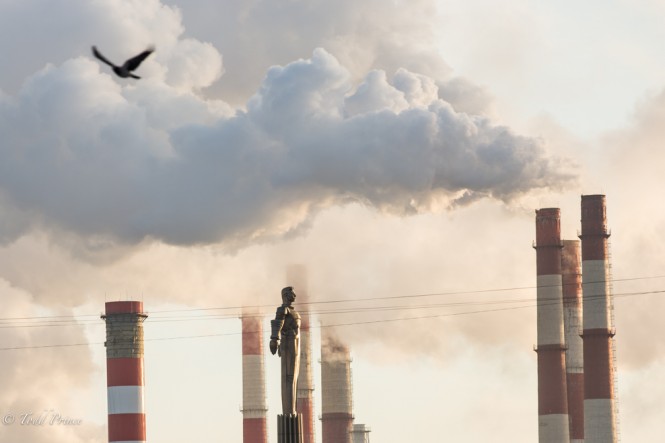 Gagarin Statue stands strong amid a background of steam and smoke stacks. 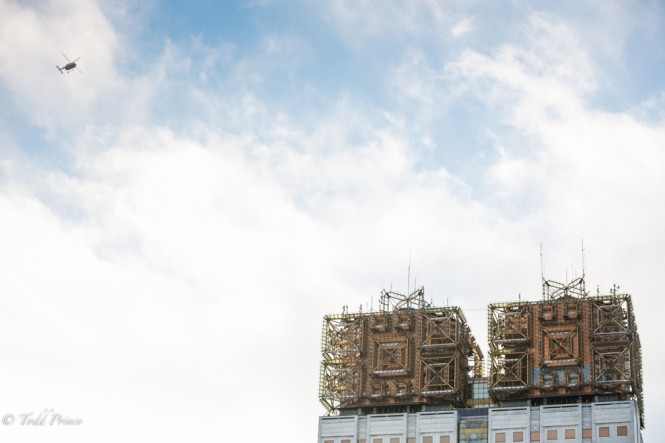 A helicopter flies over the Russian Academy of Science. 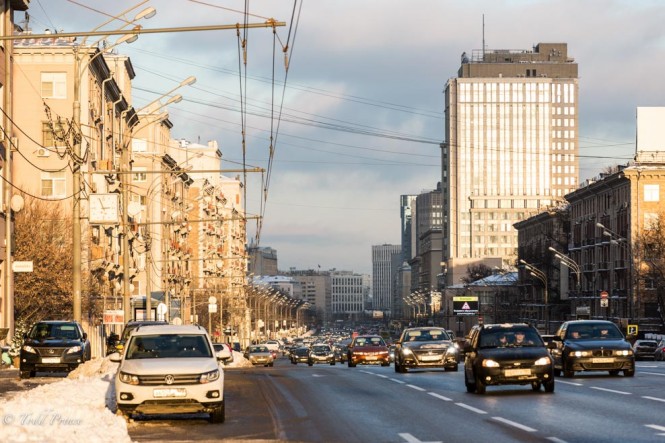 Cars racing down Leninsky Prospect in the direction of the setting sun. 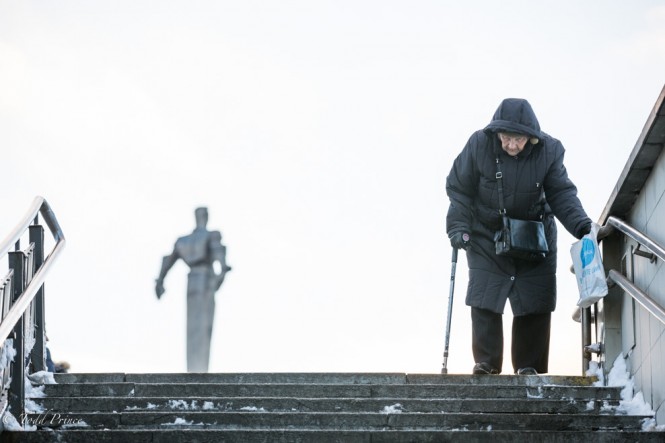 An elderly woman walks down stairs as Gagarin statue rises behind her.

A reflection of the Russian Academy of Science building in the frozen Moscow River. 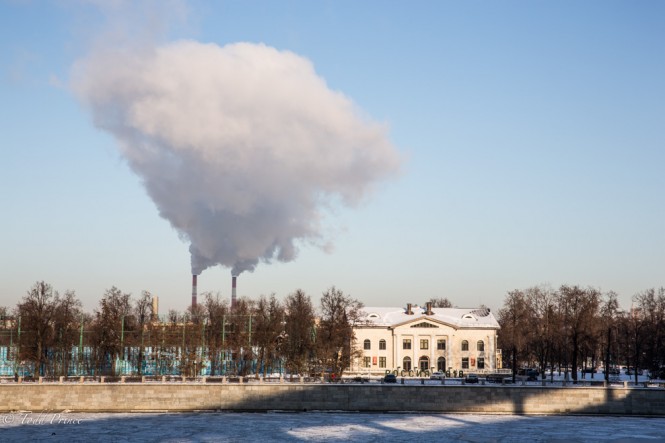 This Moscow power station creates of cloud of steam above the city.