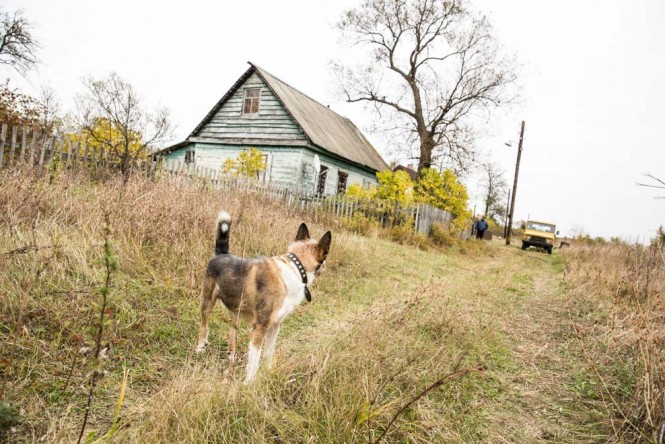 A LUAZ vehicle standing outside a village home in Lunino.

The yellow-colored 1970s LuAZ went up and down quickly like a canoe in choppy waters, forcing my driver Valery to rapidly turn the driving wheel left and right to ease the impact.

The engine screamed like a saw, the smell of diesel filled the LuAZ and my bags banged around as we moved along the narrow road through a forest at no more than 10 kilometers an hour.

On this heavy overcast day, we were making the 4.5 kilometer treck from the big village of Troitskoe in Tula region to the ‘dying’ village of Lunino that lay mostly over a little-used dirt road. 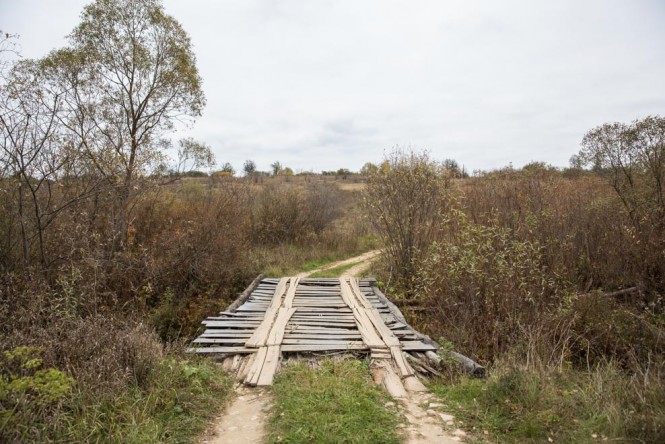 The bridge in Lunino village. The creek, at one time several feet high, has dried up.

This road to Lunino has never been good. My host Valery, who has had a dacha there since 1989, recalled tractors sometimes pulling cars over the road. As the village population decreases in size, the road is used less and gets worse.

In fact, the road is so bad that Valery leaves his compact car at his friend’s in Troitskoe and takes the LuAZ to make the 4.5 kilometer treck. He doesn’t want to again damage his car on the road.

When a Moscow friend offered me the opportunity to visit her relatives in Lunino, a village in the boondocks, as she put it, I took her up on it. 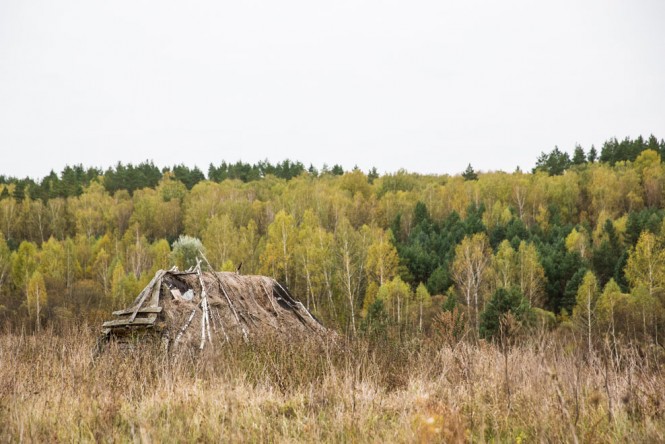 An abandoned barn outside Lunino.

Russian villages – much like Siberia – fascinates the imagination of foreigners. Say the word ‘Russian village’ to foreigners and concrete images of slanted wooden homes, babushki in head scarves and muddy, impassible roads probably come to their mind.

However, Russian villages vary widely in size and prosperity. Those relatively close to a major city with a scenic landscape might be turning into a dacha destination for an urban middle class or even a permanent residence for someone that prefers to commute to a city.

I wanted the opportunity to again spend some time in a village to hear its history, experience its everyday life and, in that way, getting a bit better understanding of a slice of today’s Russia.

For Lunino, I suspect, probably represents hundreds if not thousands of villages around Russia. 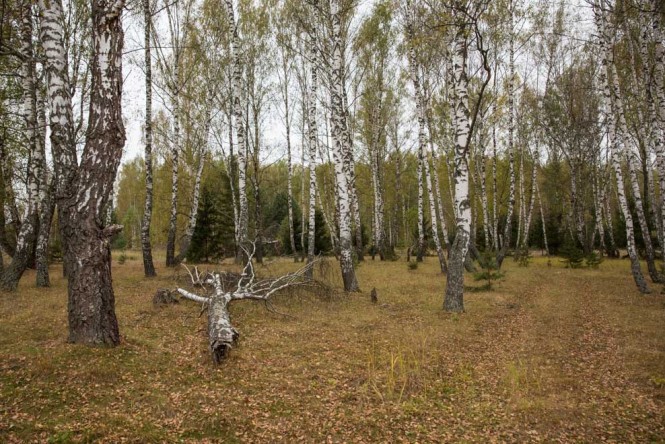 The forests have expanded around Lunino.

As we drove through a forest on the way to Lunino, Valery pointed out that it had expanded significantly over the past twenty years. Cows and other live stock use to graze and roam in the area that the forest has now reclaimed.

The nearby collective farm – the remains of which we passed on our way toward the village – collapsed in the 1990s. The cows were sold off and people moved to towns in search of work, leaving nothing to stop the advance of the forest.

As we exited the forest and drove in the LuAZ up a hill, I could only see at first three homes in Lunino. 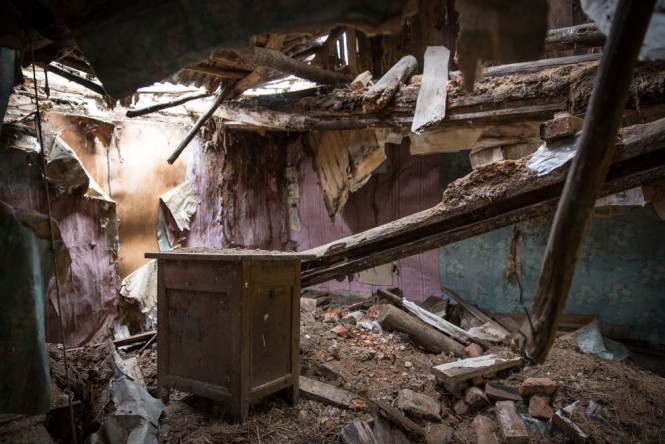 Inside an abandoned home in Lunino.

‘’This is a village,?’’ I thought to myself? It looked like a few random homes built at the edge of a forest, unworthy of even the term ‘village.’

After we unloaded my bags, Valery walked me through Lunino, explaining that it consists of 10 homes, six of which are inhabited during the summer time as dachas, or summer houses.

The patio of an abandoned home in Lunino.

Four houses stand abandoned in various degrees of disrepair, their wooden gates twisted and slanted due to neglect.

According to Valery and his sister-in-law, there were at least 16 homes in Lunino nine years ago, with at least five of them inhabited year-round.

The permanent villagers were mainly elderly people that were born or raised in Lunino. 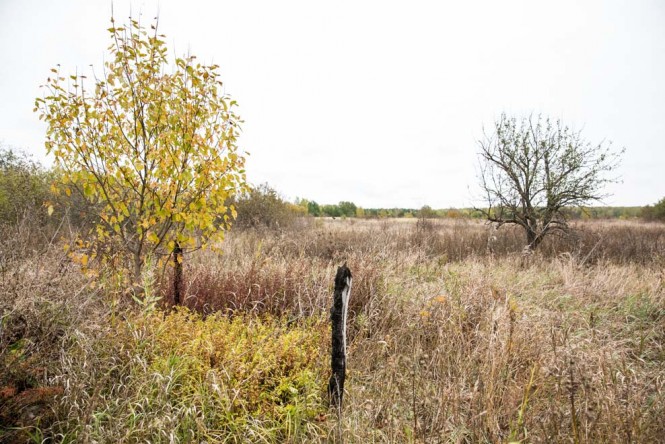 The charred remains of one of the Lunino houses that burnt down in a blaze in 2006.

A fire ripped through the village in 2006, destroying about six homes. The charred remains of the wooden homes peak out amid the grass and trees that have grown where the homes once stood.

Like most Russian villages, Lunino used to be larger in Soviet days. According to a tale passed down by a village resident, Lunino dates back to at least the 1870s. By the early 1940s, there were about 40 homes lining both sides of Lunino’s dirt road. 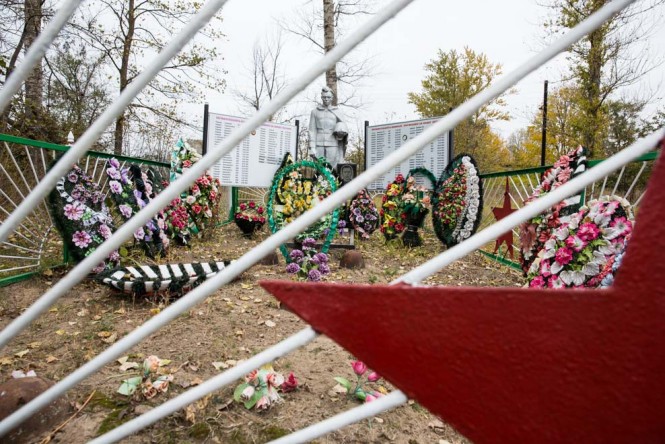 The Tula villages of Salnitsa, Lunino and Troitskoe were attacked by Germans. This is a memorial to those that died.

WWII took its toll on the village, which was the location of fierce fighting in 1942-1943 as the Germans were retreating. A Russian battalion was based there are one point.

As the Germans moved through the village, they set fire to homes. One story has been passed down from those dark days in Lunino.

A resident, seeing what was happening, tossed wood into his stove oven and shut the pipe valve so that the smoke filled the house rather than escape through the roof. He hid his children in the barn while he ducked down in the home.

The Germans left this house alone, probably assuming it was burning already. The father and his children survived…as did their home.

But many homes … and more importantly … people didn’t survive the war. 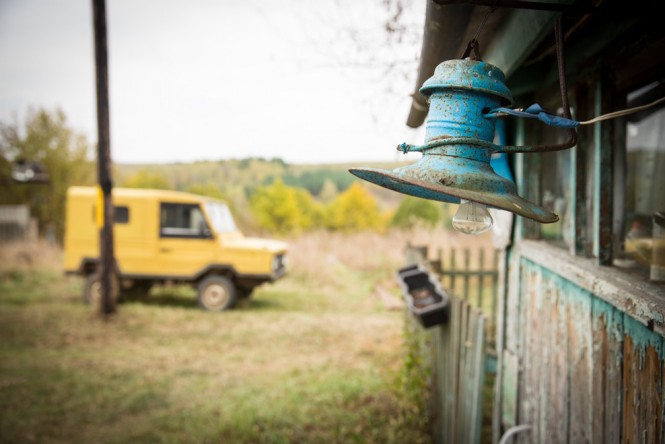 A house light in the village of Lunino.

Skeleton remains are still found around Lunino to this day. A war memorial to the people killed stands in Troitskoe near the ruined church. The list of names is long.

Some of the villagers that survived the fighting may have left to find work rebuilding cities damaged during the war.

The children of those residents that remained in Lunino probably moved to bigger villages and towns nearby. (And now their children are likely moving to cities.)

As a result, this village which has existed on maps for the last 150 years and reach a population of probably 100 at its peak before the war is now merely a summer escape for six Moscow-based families.

Salavat returning from the forest. The house he lives in during the winter can be seen in the background.

Only Salavat, a 70-year old retired water engineer, stays in the village during winter to watch over a home for a Moscow friend, leaving when summer roles around.

Salavat spends his time chopping wood for the iron stove and listening to news and music on a portable radio. He makes the 4.5 km walk to Troitskoe to buy food. 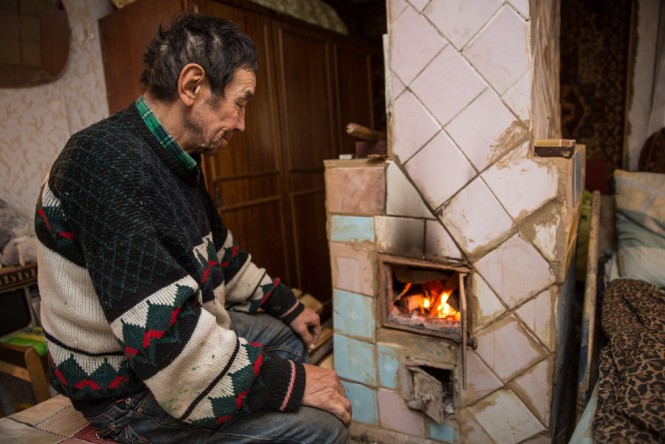 Salavat watching the wood burn in his sleeping room.

While there is electricity, there is no running water in the homes or gas heating. A water tower stands about a 1,000 meters away and when turned on, it brings water to the pumps that stand in front of the homes. Wood is gathered from the nearby forests for winter heating.

There is no running water in the homes or gas heating, explaining why young people left the village.

Like many villages in Russia, there is probably no future in Lunino, even as a dacha residence.

Some of the current home owners are quite old and their children may see little value in a dacha in the middle of nowhere. 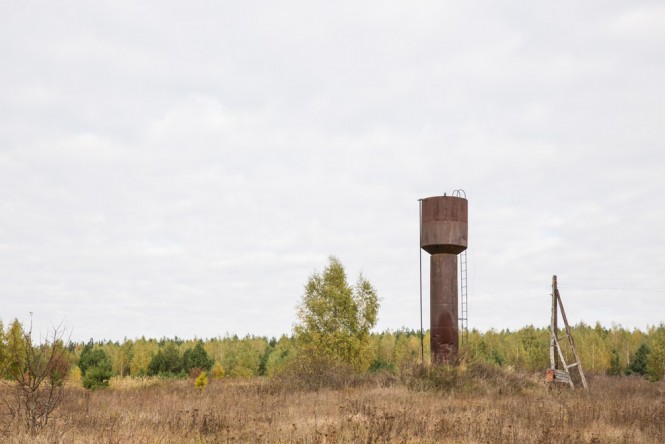 The water pump station in Lunino. None of the 10 houses remaining have water running in the house.

And the people leave, ‘nature’ returns. Aside from the forest, the beaver population is enjoying a rival in Lunino….there are so many these days that they have impacted the stream that runs between Lunino and the forest. Foxes approach the Lunino homes at night from time to time while a boar can be spotted sleeping under a window.

Like most small villages in Russia, there is probably no future in Lunino, even as a dacha residence. As the current home owners age, their children may see little value in a dacha that lies in a remote area that police and emergency service don’t want to service. One villager that passed away on the spot had to be driven by family to Moscow in the back of car. 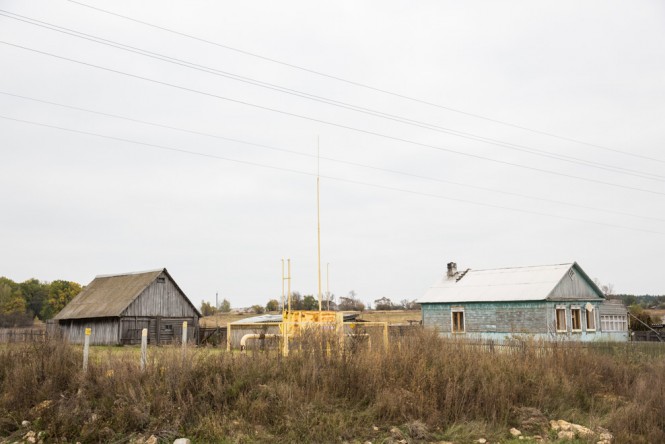 There are plenty of other locations to build a permanent home or dacha with superior infrastructure, such as gas, plumbing, paved roads and convenience stores.

Valery’s friend used to live in Lunino, but moved a few years ago to Troitskoe, where there are roads, running water and stores.

Valery’s acquaintance used to live in Lunino, but moved a few years ago to Troitskoe, where there are roads, running water and stores.

Mobile telephone reception and 3G is spotty in Lunino, though good in Troitskoe. Valery paused on the dirt road from Troitskoe to Lunino to skype his wife, the reception cutting off only once during their several minute conversation.

In a decade or two, no homes may exist in Lunino. The same can be said for hundreds of other villages like Lunino around Russia.

While for some people it will be a personal tragedy due to their ties to the land, it should not be interpreted as a tragedy for the country or the economy. Villages have been coming and going for thousands of years, reflecting in part changes in the economy. 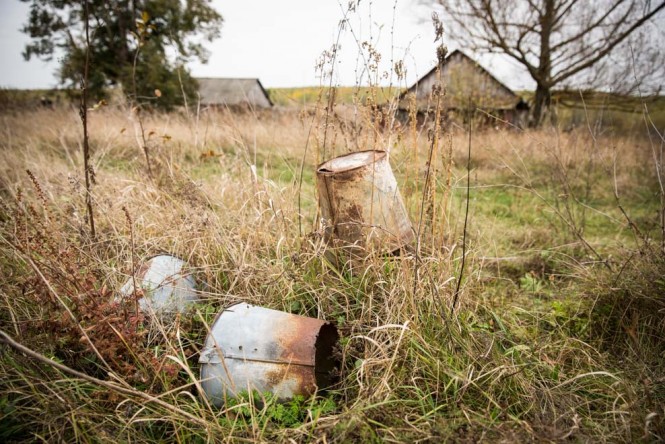 Rusted metal buckets outside an abandoned home in Lunino.